How do you structure the diet to build muscle without getting fat, or lose bodyfat while gaining or maintaining muscle? There are plenty of strategies available that seek to address these goals, but so far the reviews have been mixed. Unfortunately there’s no cookie-cutter, one-size-fits-all approach that works for every metabolism.

The good news is that all effective dieting strategies have one thing in common: they make the best use of insulin.

The first law of thermodynamics states that, “The energy within a closed system remains constant.” This means that energy can be transformed (changed to one form or another) but can’t be created or destroyed. To lose weight, you need to take in less energy than you burn. To gain weight, you need to take in more energy than you burn. Eat too much and you’ll get fat, no matter where the calories are coming from.

It’s that simple. There’s no “magic” combination of macronutrients, micronutrients, meal timing, supplements, or even drugs to get around this. If you’re the type that needs someone or something to blame, start with evolution, the universe, or the GOP.

However, a calorie is not just a calorie in the long run. Different macronutrients produce different long-term effects hormonally and metabolically.

While we can’t alter the laws of the universe, we do have some say how energy from the food we eat is used. Nutrient partitioning determines what the body does with energy from the diet. Calories are either burned and used for immediate energy or stored for future considerations. Given our druthers, all our extra energy would be used to fuel new muscle growth and build up muscle glycogen stores, not stored as bodyfat. After all, as athletes, we want to be lean, muscular, and full, not fat and flat.

However, unlike the first law of thermodynamics, macronutrients matter for nutrient partitioning. So how do we maximize muscle glycogen stores and minimize bodyfat, while gaining or maintaining muscle?

Nutrient partitioning is regulated by many tissues, a coordinated action of the liver, gut, brain/CNS, adipose tissue, and muscles, along with a symphony of hormones, secondary messengers, and ion channels. Scientists aren’t even sure exactly how it all works. Nutrient partitioning becomes dysfunctional in the obese and diabetics, who also happen to be insulin resistant. This isn’t a coincidence; insulin plays a huge role in nutrient partitioning. The more insulin “sensitive” you are, the better nutrients are partitioned in your favor.

Obviously we want to maximize muscle glycogen storage and protein synthesis in muscle tissue while minimizing fat gain. Yet the popular belief that carb intake above a certain point “spills” into fat cells is not correct. Insulin isn’t selective. It constantly stimulates fat cells to take up glucose where it’s converted to glycerol or fatty acids, both of which are required to form triglycerides which are stored as body fat.

This means that we’re always storing bodyfat after a meal, although this isn’t as bad as it sounds. Under normal conditions muscle accounts for 85-90% of insulin-stimulated glucose disposal, while fat only accounts for 5-15%. 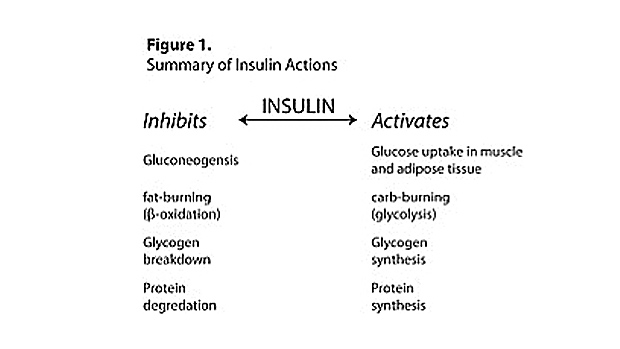 But eat too many carbs (or the wrong kind), and things can change. Glucose will only be deposited into muscle and liver tissue until glycogen stores are full, the rest of this excess energy will be turned into fatty acids and stored as triglycerides in adipose tissue.

Insulin is just the messenger. The real action occurs with GLUT4, which allows glucose to enter the cell. 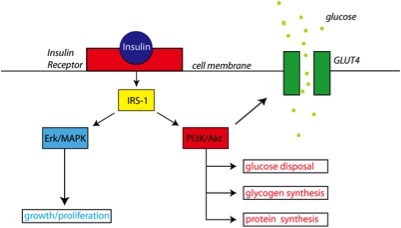 For those who are insulin resistant, it’s like they get the “knock at the door” (insulin receptor on cell membrane), but nobody answers. There’s no “go” signal given to the GLUT4 proteins. Now nutrient partitioning gets tricky. In this case there will be little or no GLUT4 translocation, and the glucose and other nutrients can’t get into the cell. This is a problem as glucose at high levels in the blood is toxic, the reason the body is set up to dispose of glucose as it enters the bloodstream.

So what happens when you knock on a door and nobody answers? Well, you knock harder. This is what happens with insulin resistance; insulin is increasingly released to activate GLUT4.

Eat too many or the wrong type of carbs at the wrong time, and they’ll be converted to fat by a process called denovo lipogenesis. This is by design, because we only have the capacity to store so much glycogen. When these stores are topped off, insulin sensitivity decreases to signal that glycogen stores are full. But any glucose remaining in the bloodstream still needs to be disposed of.

To accomplish this, more insulin is released, causing excess glucose to be converted to triglyceride by denovo lipogenesis. These triglycerides are then stored as fat in adipose tissue.

A loose recommendation is to consume 70% of your carbs during the pre, intra, and post workout phase. The other 30% should be added to your breakfast, and/or the second post workout meal. If you train in the morning, then your lunch would be a better choice for the additional carb intake.

This isn’t a universal guideline – everybody has different carbohydrate needs based on their metabolism, type of training, and supplements they take such as Indigo-3G® which seemingly allows you to ingest more carbs than you ordinarily could. It’s an effective rule of thumb that does a good job of getting people leaner without compromising gains in muscle/lean tissue.

So if you consume 300 grams of carbs on days you train extremely hard, consume 200 grams during the pre, intra, and post workout phase.

The other 100 grams or so would be placed in your breakfast (50 grams), and second post-workout meal. Structuring carb intake this way gives them “purpose,” and provides better nutrient partitioning.

You can drive more nutrients into muscle by using exogenous insulin. I do not endorse this option, as a pancreas is a terrible thing to mess around with. The less insulin needed to get the job done, the leaner you will be!

The average person has around 350-400 grams of glycogen reserves in muscle tissue, and another 100 grams or so in the liver. If the extra carbs are not burned for immediate energy, they’re converted to triglyceride and stored as bodyfat.

Don’t misinterpret this as a “carbs are bad message.” Again, excess carbs are the culprit.

Inflammation has a negative affect on insulin sensitivity, so controlling it is an important part of the nutrient partitioning equation. Chronic inflammation is a common denominator for obesity and type 2 diabetes, so if we connect the dots, poor insulin sensitivity means you’ll be prone to gain fat and partition nutrients less efficiently.

Note: The overall level of inflammation in the body is determined by the ratio of omega-6 to omega-3 fats in cell membranes.

The human body can produce all the fatty acids it needs except for linoleic acid (LA), an omega-6 fat, and α-linolenic acid (ALA), an omega-3 fat. These fats are essential, and it’s critical that we include these in the diet in the correct ratios to limit inflammation.

Note. Only 8-20% of ALA in the body is converted to EPA, while conversion of ALA to DHA is even less, around 0.5-9%. This means that it’s tough to get enough EPA and DHA to limit inflammation and achieve optimal levels of insulin sensitivity by ALA consumption alone.

The good news is that fatty fish such as salmon, trout, and herring are loaded with EPA and DHA. You can also boost EPA and DHA with fish oil or supplements such as Flameout®.

Scientists have recently discovered that the inflammatory response that causes insulin resistance and diabetes is linked to adipose tissue. Until recently, adipose tissue was considered to be “passive” storage for lipid energy, but we know now that fat stores also function to control whole body insulin sensitivity.

Scientists started taking a closer look at adipose tissue when it was found that over-expressing GLUT4 in adipocytes actually improved whole-body insulin sensitivity. Several years afterward, it was discovered that knocking out the GLUT4 gene specifically in adipose tissue caused insulin resistance in muscle and liver, proving that adipose tissue significantly affects how insulin works in the rest of the body.

Fat is really more of an endocrine organ, secreting a number of hormones called “adipokines” which control whole-body insulin sensitivity and inflammation.

The “bad” adipokines including resistin, TNFα and other cytokines such as IL-6 increase cause insulin resistance by increasing inflammation. Fortunately, we have some say over the type-and level of adipokines that are secreted from fat cells. The omega 3 fats EPA and DHA promote the production of the “good” adipokines, which increase insulin sensitivity and optimize nutrient partitioning.

EPA and DHA on Insulin Sensitivity and Inflammation

The SNS is more commonly known as the “fight or flight” system. It responds to stress by speeding up the heart rate, constricting blood vessels, raising blood pressure, and reducing digestive activity; basically, everything you need to fight or run from danger. The PNS counteracts the SNS by inducing a relaxation response (blood pressure and heart rate are reduced, digestive activity is increased, etc.). It’s the overall balance between PNS and SNS activity that determines how much insulin is released and insulin sensitivity.

This system served us well in our ancestral days. When confronted by a saber-toothed tiger or angry club-wielding cavewoman, the SNS system kicked in, preparing us to fight or flee. If we managed to survive, ANS activity returned to normal once the stress abated.

But today, stress tends to be chronic instead of acute, such as deadlines, taxes, traffic jams, angry broom-wielding wives, etc. This put us in a constant state of stress, resulting in an imbalance between the SNS and PNS branches of the autonomic nervous system.

Chronic/ high levels of stress cause the ANS to become unbalanced by over-activating the SNS system. This can lead to insulin resistance, adrenal fatigue, high blood pressure, and increased muscle breakdown.

Left unchecked, stress can be a killer. We can’t state the importance of this enough. High stress levels are poison to a great physique.

The goal of nutrient partitioning is to strike a balance where nutrients are diverted primarily to muscle mass and glycogen storage while losing or maintaining low bodyfat levels. This is a subtle place, but just as the body balances countless factors to maintain energy homeostasis, our nutrient partitioning efforts need to be “balanced” as well.

Under normal conditions the system is self-regulating, but by following the guidelines we’ve laid out in this article you’ll be well on your way to a leaner, more muscular, healthier physique.