Dr. Lonnie Lowery is skeptical, and I'm not surprised one bit.

Lowery is, after all, a bodybuilding nutrition professor who's smack in the middle of a mass phase. He probably didn't want to hear about a physique transformation plan that involved NOT eating.

Still, the Pulse Fast intrigued him. He calls the Pulse Fast a "dramatic dieting modality" but said he was determined to find some "nerdy calculations and physiological facts to help us understand the underlying mechanisms."

What he's discovered so far is something that we – the creators of the Pulse Fast – hadn't really considered.

As soon as I heard about the Pulse Fast, my interest was piqued. The Pulse Fast was something aggressive that I could do just once per week, leaving the rest of my week alone.

Here's the deal: I'm in the midst of a fall mass-building phase. I've already planned my diet very well. I've gained 16 pounds of lean mass since early summer. The Pulse Fast was something I could easily do once per week without changing the rest of my plan.

So, perhaps ironically, I planned to "fast" during my bulking phase.

Insulin: The Jekyll and Hyde Hormone

I purposefully keep endogenous (internal) insulin flowing when gaining mass. But it's been a while since I've done this, and I know insulin is a "Jekyll and Hyde" hormone – both friend and monstrous foe. Elevated insulin concentrations can help you build muscle or it can make you fat and lead to disease.

With chronically elevated insulin concentrations, particular genes get turned on and the fat-building machinery of cells gets overproduced, setting the stage for triacylglycerol creation and storage (fat gain).

Further, with my family history of Type II diabetes and obesity, I was aware that I may be a poor carb-handler, particularly now that I'm in my early 40s and no longer a multi-sport, hyperactive youth. Unwanted fat gain would be tougher to strip off in early spring.

I had to give my physiology a break from the past eight months of gain, gain, gain. I needed to re-train my body so the Hyde side of insulin didn't begin to overpower the Jekyll side. In short, I needed insulin relief.

Still, I needed insulin on my muscles' side, and in sufficient quantities to work with my other anabolic hormones. This is where Pulse Fasting came in.

By simply doing this augmented version of a protein-sparing modified fast (PSMF) once per week (when I'm crushed with work at the university and find it difficult to eat anyway) I could remove insulin's presence to some extent and give my genetic machinery a break.

Holy carboxylations, Batman, is this just all intellectual gobbledygook?

A picture is worth a thousand words, so I thought I'd create one to illustrate to myself just how much "insulin relief" I'd be getting by employing a MAG-10 Pulse Fast one day out of seven.

Looking at the graph, you can see that moderately-sized casein and casein-plus-fat meals are mildly insulinogenic. Not quite at the magnitude of a 524 kcal mixed meal (19% protein, 63% carbohydrate, 18% fat) but that's the point, isn't it? As stated by Tipton (2004): "The magnitude of insulin response [to 20 g casein] was not great."

The Right Magnitude of Change

Let's consider peak insulin values across a day. The comment in the upper right of the graph shows that a pretty standard six meals for a grown man (about 3000 kcal per day) results in 400-500 units of peak insulin over six meals. That equals 2400-3000 total units secreted just at these peak times.

By contrast, the casein "pulse" values are clearly much lower. Even at 20-50 grams per dose or with 1g/kg of fat added, there's not a whole lot happening. No carbs, less insulin. That's pretty straightforward.

Multiplying-out the peak insulin values we get 65-79 units for ten pulses. That equals 650-790 total units secreted at peak times.

And it's worth noting that Pulse Fasting is more along the lines of just 10g casein hydrolysate boluses – a smaller dose than 20-50g and that would lead to a somewhat smaller insulin response. On the other hand, MAG-10 is spiked with leucine, so we might be back up near 70 after all.

Leaving other issues to the side, this low and steady insulin effect puts my "Oh my God, I'm shrinking!" thoughts at ease, even as I take a day off of forced eating and start to retrain my biochemistry away from fat storage. 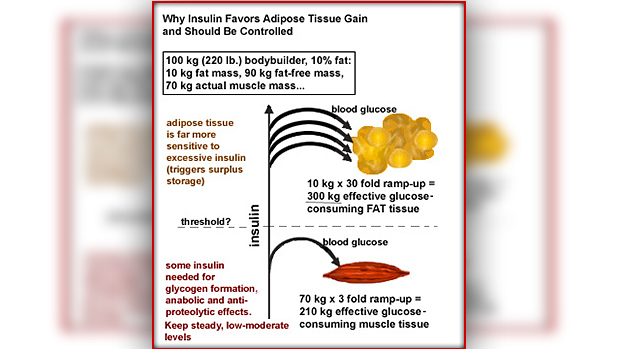 If I'm theoretically producing roughly 75% less insulin one day per week, on that day my physiology reflects the lower half of the figure. That is, on Mondays I produce enough insulin to maintain muscle mass but notenough to keep my cellular machinery in fat storage mode.

A week-long computation suggests that I'm secreting 11 percent less insulin per week. That is, if I set my previous chowhound insulin levels as 100 percent max secretion for seven days, I'm now at just 25 percent output on Mondays, plus 100 percent on the other six days.

Eleven percent sounds perfect to me. It feels like the right magnitude of change at this point in my year-long macro-cycle. And this is just concerning the insulin side of the equation.

Next time, I'll ramble on about what else I see besides insulin underlying the MAG-10 Pulse Fast andI'll offer some other thoughts, like what else a 40-something bodybuilder does to shift his physiology and mental state from mass-crazed off-season fork fiend to in-season lean freak.

Do you need an "insulin relief day" in your mass phase? Think about it. And let's discuss below.