Several years ago one of my clients was waiting for me to write his next monthly training cycle. After I explained that I'd have it to him the next day, he replied, "Great – I miss that "new car smell!'"

I always remembered that quip, because I knew exactly what he meant, and I'm betting you do, too. Later, it got me thinking: why does newer always seem more attractive? Because clearly, it isn't always more effective!

I'm often struck by a common occurrence that I'm sure you'll immediately recognize. Upon starting a new training program, you're preoccupied with its novelty, which tends to distract you from the hard work that all good programs entail. I call this the inspiration phase.

Later, typically a month later, a subtle shift occurs. Now, the difficulty of the program seems much more "top of mind" than the novelty, which by now has worn off. You're now in the perspiration phase. No more new car smell. You've got the 30-day itch, and pretty much every program out there seems sexier than that old tired one you've got waiting for you at home.

One popular training "system" (if you'll permit me to call it that) that's well-known to everyone exploits this reality. I believe much of its appeal is that it's the exercise equivalent of being a swinger – each workout is different from the last, and you never know what you're in for until you show up.

One undeniable benefit of that well-known system is that you'll never "stray," because really there's nothing to stray from. And because of this, you're much more likely to be consistent, which means, if nothing else, you're likely to get leaner, because everything you do has an impact on your cardiovascular system.

The problem is, however, since you'll never do any single exercise very often, you're not likely to get very strong at any of them, which means your ability to grow significant amounts of muscle will also be negatively impacted. And that's a real problem in my book, because the whole point of training with weights is to get stronger.

I've actually given a lot of thought to this phenomenon and have identified 5 primary reasons for why it happens:

2 You always hear from others who seem to be getting great results using "that other program."

Now this sounds like a very logical way to shop for programs, which is why testimonials are a powerful marketing tool. But there's an inherent trap to this: typically, you only hear enthusiastic responses from those who got great results from the program, not those who found that it didn't work well for them. So it might be that 10,000 tried the program, but only 1000 found it effective. Of those 1000, maybe 500 raved about it (you can't blame them after all), but maybe only a handful of the non-responders bothered to tell anyone about it.

Now there's an important point here that I don't want you to miss: The fact that the program you had your eye on only worked for 10% of the people who tried it doesn't mean it's a bad program – it just means that it only works for certain people. That's true of all programs. Even if a program only works for 2% of those who try it, if you're part of the 2%, it's a great program – for you.

As explained by Dennis Prager on his You Tube video on the subject, the missing tile syndrome is the tendency to focus on whatever it is you think is missing in your life, even though it may be insubstantial compared to what you actually have. In other words, when you look at the tiled ceiling, your eye goes straight to that one missing tile. By nature, people tend to notice what's missing more than what's present.

Applying this to training, your program might be working just fine, until you read about another program that uses a special tool, method, or philosophy – one that your current program doesn't have. Your brain goes right to that missing tile, quickly forgetting all about the fact that your current program is the most effective one you've ever used.

4 Perfect is the enemy of the good.

Seeking perfection isn't only fruitless, it's also unproductive because it leads you to stray from the things that are already working quite well for you. Now this isn't to say that you shouldn't ever seek improvements to your approach – far from it. I just don't want you abandoning what's already working for you.

5 "That program worked so well, I stopped doing it." – Dan John.

As time goes by, we tend to forget the value of what we're doing and simultaneously become more and more aware of the imperfections of our current program or philosophy. Remember that gains in strength, mobility, speed, and especially hypertrophy, require working hard for significant timeframes. For an experienced trainee, for example, putting on 10 pounds of muscle in a year is a huge achievement. The best friend of progress is patience, and the worst enemy of patience is a wandering eye.

While variety is good – even necessary, too much of it derails your continued progress. In order to get better at anything (and indeed, in order to accurately assess the value of something), you've got to put your time in.

You'll never know if benching 5 times a week, or doing most of your squats to a box, or deadlifting from a deficit will really pay off unless you run the program for several months at a minimum.

I always put it like this: imagine that you take Spanish in 9th grade, Italian in 10th grade, French in 11th, and Japanese as a senior – how proficient do you think you'll be in any of those languages, as compared to just studying one of them for 4 straight years?

What we need, in my opinion, is a way to trick ourselves into thinking we're getting something new, when we really aren't. Here are a few ideas on how to do just that:

If you've ever visited any country's Olympic training center for any sport, you'll notice something very telling – the athletes you'll see do pretty much the same things all year round. Sure, you'll see some variation, but it's tightly-confined variety.

You won't see Olympic weightlifters (for example) doing TRX one week and kettlebells the next. What you will see are the same exercises performed over and over again, week after week, month after month, year after year.

From a distance, it looks exciting, but from the inside, it can be a grind. That's the price of success, but then again, the rewards are great. I do hope this article will inspire some contemplation on your part, and as always, I'd love to hear your thoughts and questions below. 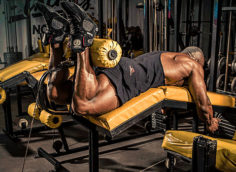 The lying leg curl is great, but it gets boring. Plus, this can work better.
Kettlebell Training, Legs, Tips, Training
Chris Shugart July 27
One of the most common areas of confusion for bodybuilders and other athletes engaged in resistance training is the question of the appropriate or optimal number of reps and sets for any given workout session or cycle.
Training
Charles Staley October 27