For reasons everyone can relate to, I've lately been using a lot of elastic bands in my training, but I'm not just talking about the ones that are beef-tongue thick and used by powerlifters to adjust the force curves of deadlifts, squats, and bench presses.

I'm also using those flat, wide, super-stretchy neon-colored ones that look like they were made from the salvaged waistbands of fancy but oversized panties, along with the slightly heftier red or black bands that could be mistaken for giant repurposed alternator belts.

I've been forced to use them because I haven't been able to get to the gym. Sure, I've got some weightlifting equipment in the backyard, but by no means do I have a complete setup. That's where the bands come in, only I'm not so happy about it.

The elastic stuff just isn't satisfying. There's no feeling of cold metal, so say goodbye to any romantic fantasies about being a modern-day Viking or any of that bullshit. The bands are just rubber, and the only masculine thing ever made out of rubber was Batman's suit.

They certainly don't clank. At best, they make, and only rarely, a kind of faint, broken guitar-string warble. No, not satisfying at all. Most importantly, I'm not even sure these elastic things work that well in building strength or muscle.

I'm lately feeling marginally better about them, though, because I got my hands on a meta-study that compared the strength-building efficacy of bands to that of traditional weights and they actually held up pretty well.

Their search pulled up a number of potential research papers, but they eventually culled it down to just seven studies comprising 224 individuals between the ages of 15 and 88. Some of these individuals were athletes, some were just physically active, and some were suffering from COPD (chronic obstructive pulmonary disease).

The subjects' duration of training ranged from 4 to 12 weeks with 2 to 5 training sessions per week. Here's a synopsis of what the various studies included in the meta-study found:

After analyzing all the data, the authors of the current meta-study concluded the following:

That's right, they found no statistically significant differences between training with weight machines/free weights and elastic bands. How is that possible?

You have to take this study for what it is. Obviously, there were no Mr. Olympia competitors, CrossFit champions, national level powerlifters, or professional athletes in this study. There probably weren't even any serious lifters of any kind in their data pool.

Hell, some of them had COPD and were as old as 88.

These types of studies also face the huge impediment of how to define and control intensity when you're working with bands. Slapping an extra 10 pounds of weight on a machine or bar is about as quantifiable as you can get, but how do you apply that level of exactness to a piece of rubber? You can't.

But forget all that. Anyone who lifts weights seriously knows there's undeniably a difference between training with free weights/machines and elastic bands. Rubber does not a big man make.

However, bands can serve as an adjunct to your training and provide a novel stimulus. Bands can absolutely make an acceptable substitute to free weights and machines when they're all you have.

Furthermore, if you've got a little imagination and a little grit, you can turn a band workout into a surprisingly effective one. I'll give you just one example that you can apply to a multitude of band exercises. Consider the band triceps extensions shown in the following video:

Pretty straightforward, right? They'll do in a pinch. But what if you were to turn this exercise, and others like it, into the most brutal "drop set" imaginable, in a way you can't do with machines or free weights?

It's easy... if you've got the grit to do them right. After repping out on the triceps extensions, reduce the resistance by stepping back an inch towards the band's attachment point(s) and rep out again. Then step back another inch and continue. Then another inch. A half-inch. Half that distance again.

If you're a philosophy major and are a fan of Zeno's paradox, you can keep on going forever because you believe there are an infinite number of halfway points between any two points. But maybe not. Maybe you should just stop when you smell meat frying.

You can do the same things with banded flyes, banded chest presses, banded horizontal curls, etc. The variations are infinite.

Free weights won't allow you to make those kinds of "micro-drops," but bands will. Regardless, if bands are all you currently have, make the best of them and take some solace that there's evidence out there that, for some people at least, they work pretty well in building or, at least, maintaining strength.

To get big, you have load up a muscle for 30-60 seconds per set, right? Well, maybe, but there are other ways. Check out the latest science.
Bodybuilding, Training
Brad Schoenfeld, PhD November 25 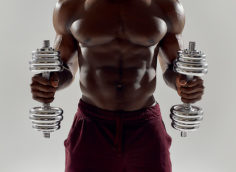 Make these three changes to how you do your hammer curls and you'll see new growth fast. Check it out.
Training
Christian Thibaudeau October 27

Test your front squat, deadlift, and testicular fortitude with this unique workout. Check it out.
Tips, Training
Martin Rooney June 28