Question: I have good levels of strength, but because I'm in chiropractic college, I'm rather limited in the amount of time that I can train. I would like to gain a few pounds over the school year, and I don't want do any of those wussy Stuart McRobert routines where my arms will shrink to what you refer to as the "eleventeen-inch" mark. Any suggestions for a a routine? I can train for 40 minutes on Monday, Tuesday, Thursday, and Saturday.

I suggest that you reevaluate your priorities, quit school, and devote your life to training. Okay, just kidding. I've outlined an effective routine for time-challenged individuals, but given your time restraints, obviously, it doesn't allow for any "beach work" like biceps curls. Here's the routine:

Notes: The designations A1 and A2 mean that you should do these two exercises in tandem. In other words, do a set of bench presses followed by a set of wide-grip pull-ups, then go back to bench presses. Continue bouncing back and forth until you've done five sets of each.

A tempo of 5010 means to take five seconds to lower the weight, no pause, one second to lift the weight, and no pause before lowering the weight again.

This sort of routine works very well. I've seen students gain eight to ten pounds of solid muscle on this type of routine over a six-month period, providing that they're consistent with their eating habits and that they stay away from the standard "Animal House" diet. Every four weeks or so, you may want to substitute the exercises. Changing the tempo would also be good.

For example, replace the bent-knee deadlifts with the snatch deadlift done off of a platform.

Do lean-away chins instead of wide-grip pull-ups.

Don't be afraid of losing arm size, though, as most people gain arm size on this routine. I've seen a Masters student, at 5'6" tall, go from 180 to 192 pounds over eight months using an abbreviated routine like the one above. He was, however, interested in further increasing his arm size during that time period.

In order to accommodate him, I prescribed that he do my One-Day Arm Cure during the study week before exams, Thanksgiving weekend, Christmas holiday break, and so on. In addition to gaining 12 pounds of mass, his arms grew over an inch bigger during the school year, just by doing an abbreviated, short routine and four, one-day arm cures.

Question: One of your industry colleagues talks about tonic and phasic muscles. What's the difference, and how would they affect my training protocols?

That terminology is rather outdated. It hasn't been used in exercise physiology since the mid-70s since it was deemed rather simplistic. Consider that there are wide inter-individual differences among muscle fibers. My colleague is referring to the assumed ratio of fast-twitch to slow-twitch fibers per muscle group.

I say "assumed" because, for example, I recently tested the relative strength of two world-class athletes – a hammer thrower and a speedskater. Both held the world record in their respective disciplines at one point in time. The thrower could only do three reps at 85% of maximum with his neck extensors, while the speedskater did over 200 reps at the same percentage. Of course, the hammer thrower was much stronger than the speedskater. It goes without saying that these physiological profiles explain why they naturally gravitated toward their respective disciplines.

Obviously, even though a particular individual's specific muscle might be deemed phasic or tonic, categorizing it as such might not accurately reflect its fiber make-up.

Tonic muscles, as they used to be called, are muscles known to have a higher slow-twitch make-up. They are, therefore, more suited for endurance tasks. A muscle with a high percentage of slow-twitch fibers may require a higher number of repetitions. The soleus muscle, for example, contains 88% slow-twitch fibers and, therefore, repetitions in the 15-25 range may be needed to give sufficient time under tension for these fibers to receive a stimulus for hypertrophy.

The soleus is also considered part of the antigravity muscle chain. These muscles are firing when you're in a standing position. If they didn't fire, you wouldn't be able to stand erect. Understandably, they're often required to maintain isometric tension for a long time.

Phasic muscles have a higher fast-twitch make-up and are used mainly for explosive bursts of activity. Muscles that fall into this category are the hamstrings and gastrocnemius, illustrating Wolfe's law in physiology:

As a rule of thumb, the higher the fast-twitch make-up a muscle, the lower its relative strength endurance – in other words, the less reps it can do at a given percentage of maximum. Therefore, muscles with a high fast-twitch make-up are normally trained for lower reps, more sets, and intra-set short rest intervals (one to three seconds between reps).

Since there's plenty of empirical evidence and scientific research to point out that the development of maximal strength is best accomplished by using loads representing 70-100% of one's maximum, it appears essential to determine the exact number of repetitions to be performed at this percentage range. For most fast-twitch individuals, the rep bracket optimal for strength gains falls within the 1-6 rep range, while other individuals may make gains in the 1-12 rep range.

Question: There's a 20-year-old kid at our gym in Colorado Springs who told my girlfriend that he can completely change her physique in two weeks. He also says that he's a third-degree black belt in Tae Bo. Is he for real?

Third-degree black belt in Tae Bo? Let me cover my spleen so that it doesn't explode out of my body when I start laughing. What do you suppose is involved in the examination for the third-degree belt in Tae Bo, being able to do all of the moves while the tape plays fast-forward?

This is complete bullshit. First of all, Tae Bo is not a martial art with a grading system. It's an aerobic dance system incorporating martial arts-based movements. Let's assume, however, that it's a legitimate martial art (just for a second). If he's a gifted martial artist, it would take three years to reach his first-degree black belt, then another two years to get his second degree, and another three years to get his third degree. Since Tae Bo has only been around for two years, you are, indeed, dealing with a "very talented" individual or, perhaps, someone who can actually travel through time.

In fact, this man appears to be so talented that you may want to encourage him to go into Ultimate Fighting where he can get a complete overhaul of his facial architecture in ten seconds or less.

As to his ability to transform a physique completely in two weeks, that means he could produce an EAS contest winner in a fourth of the time normally required – again, very impressive.

Question: I heard a rumor that the recent increases in arm size in the Mr. Olympia have more to do with local injections of Synthol or some other oil-based compound than training methods or drugs. Do you know anything about it?

As a matter of fact, I was in Southern California recently and met with a friend of mine who's an IFBB pro. He showed me a series of pictures where his arms grew from 20.5" to 22.25" in just two weeks. He was supplied the compound by a southern hemisphere bodybuilder who, I was told, actually had over 27" arms! I gave the standard reply of "Bullshit!"

To prove me wrong, my friend showed me a tape of him flexing his then 20.5" arm against the dealer's gargantuan arm. Well, my friend's arm looked reminiscent of Woody Allen comparing his biceps to the 1978 Arnie. Even though I didn't see a tape measure, my friend's arm, at a bodyweight of 250 pounds, looked...puny.

However, this practice is not without side effects. Plenty of bodybuilders are seeing drastic side effects, including scar tissue buildup, abcesses, loss of strength and flexibility, neuropathy, and a host of others.

People using these oils are easy to spot as the muscle has little definition, regardless of how low the individual's body fat is. Interestly enough, it doesn't seem that you need it to win. If you look carefully at Ronnie Coleman's physique at the last Olympia, you can see only shredded bodyparts, so my best guess is that he isn't using any of these designer synthetic oils.

Question: I recently attended your Stamford size and strength seminar, and I learned more in those 16 hours than I have completing my Masters degree in exercise physiology and working as an assistant strength and conditioning coach at a college. During the break, some of the strength coaches were talking about wavelike loading and how great it worked for them. I don't recall you mentioning it during the seminar. Can you please elaborate on it?

Sorry I didn't cover it, but I can't possibly discuss everything that I know in just a single seminar. Some attendees have taken the seminar over eight times, yet they still come back. Since the make-up of the audience is always so diverse, I tailor the seminar to their expectations and present needs. So, some of my seminars may concentrate on strength training, while some concentrate on hypertrophy.

Getting back to wavelike loading, this system was shown to me by former Canadian national weightlifting coach Pierre Roy who was, undoubtedly, one of the brightest men I've met in the field of strength development. Wave loading is based on the principal of post-tetanic facilitation. Athletes will find that the hardest wave is the first one, while the succeeding ones are easier to perform.

Editor's note: For an example of another wave-loading program, check out Ian King's Limping Into the New Millennium article from last week's issue of Testosterone.

The following 3-2-1 wave-loading program (exceptional for athletes seeking greater relative strength) sample is for an individual who can do a 300-pound front squat:

If successful, proceed to the third wave.

If successful, proceed to the fourth wave.

Note: Most people will do two waves – maybe a third one on an exceptional day – but it takes athletes truly gifted for strength development four waves to reach their maximal load for the day.

The following 7-5-3 wave-loading program (suited for athletes in combative sports interested in moving up in weight class) sample is for an individual who can do a 350-pound incline press:

Note: Regardless of the strength profile of the athlete, two waves will suffice at this intensity zone.

Give it a try and see how you like it.

Christian, I really want to improve my biceps development. Do you think that supersets are a good training method to use for that purpose?
Bodybuilding, Training
Christian Thibaudeau June 13

Here's everything you need to know about supersets. Check it out.
Tips, Training
Christian Thibaudeau January 22

Women not only need to train harder than men, their physiology makes it so they can. Here's what every female lifter needs to know.
For Women, Training
Charles Staley November 15 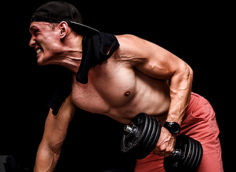 Fix your dumbbell row. You know, so you don't look like that one moron in the gym. You know the one.
Training
Michael Shaughnessy January 5