The clean is essential for power and athletic performance. Already working it into your training program? Good. Now let’s fine-tune it.

Your feet should be about shoulder width apart. When in doubt, prepare to jump as high as you can, and right before you leave the ground, stop. This will be your starting point. The barbell should be over the balls of your feet. And when you grab it, your hands should be just outside foot placement. 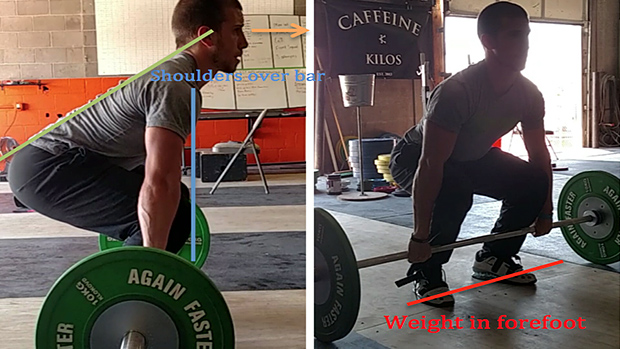 Your knees will start over the bar. Depending on femur length, some knees may travel further over the bar than others. Your hips, referencing your hip crease, will be positioned higher than the knees, yet below your shoulders. Ideally the distance between the shoulders and the knees to the hip crease should be close to equal. Don’t pick up the bar with high hips. Remember, this isn’t a deadlift, they are two different movements with two different set-ups.

The first pull starts with the bar resting on the floor and ends at roughly the knee. It lays the foundation for the rest of the movement. Most problems start in the first 10 inches of the movement. The first pull’s purpose is to maintain proper position so that the second pull can be as explosive as possible. 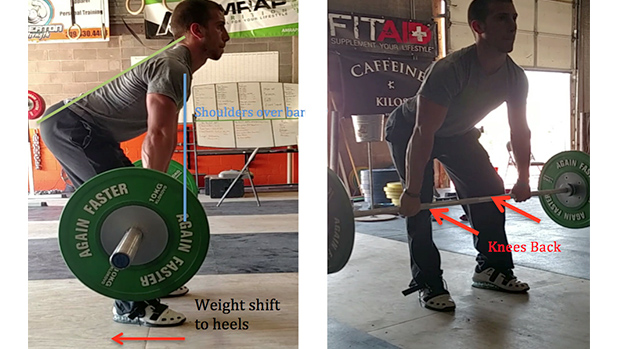 Your weight on the feet is going to shift from the mid-foot to the heel. This transition in weight from front to back allows us to slide our knees back so that the bar will travel in a vertical line. If you don’t move the knees accordingly you’ll be forced to move the bar around them, meaning the bar would travel outward in front. You wouldn’t be able to keep your shoulders over the bar, thus losing leverage.

The knees are extending while being pushed back (straightening). Aside from getting them out of the way, you’re also loading the hamstrings, which will cause a much needed acceleration later. Your hips, back, and shoulders do very little moving at this time, but they must remain under tension, which will result in the best transfer of energy. The joints maintain the same angles determined in the set-up.

Think of it almost as the “first push” because you’re not rowing or pulling the bar with your arms, you’re lifting it from the ground using your lower body. This is more like pushing the legs into the ground, moving as they would in a leg press.

Think pulling inward, not upward. The bar goes from knee to upper thigh and hip. This starts the acceleration and explosive phase. This is also where a lot of power is lost. The first thing to point out is even after the bar has cleared the knees you still remain over the bar. The torso angle will have changed slightly, but the bar remains covered by the shoulder. “Covered” is a common reference to the shoulders remaining over the barbell. All the cool kids use it. 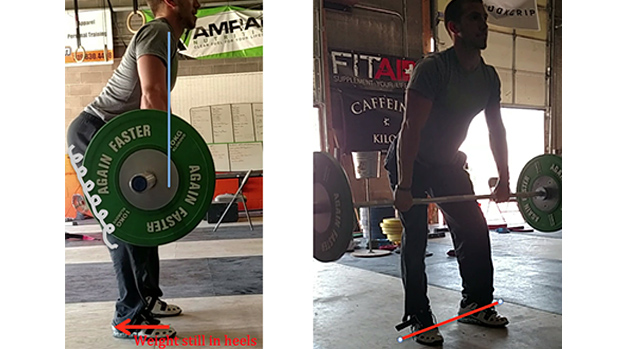 The longer you hang over the bar, the greater the stretch felt by your hamstrings. This in turn generates more stored force, waiting to be released. A spring is used to represent the tension of the hamstring. Think of your hammies as hamSPRINGS, not hamstrings. The stretch reflex and shoulder leverage will both help the next segment of the clean.

The arms have been acting solely as ropes. You want constant tension so when one side is pulled the other end will move the same distance. Pulling a loose string may not make the other end move, which equates to poor translation of energy. Bent arms are frowned upon in the clean, but as long as they remain a constant length it produces the same results. Just don’t use them to pull the bar.

The weight of the bar should settle directly under the shoulder, thanks to gravity. To counter this and maintain leverage it’s crucial that you actively and continually pull the bar inward using your lats. Any excess space between the bar and thighs poses a possible threat later. Keep it close but not to the point where it drags up your leg.

Once the bar is near the mid-thigh it’s time to release the pent up energy from the hamstrings and shoulder leverage. Releasing them together will maximize the height and velocity of the bar, allowing you to lift heavier weights higher.

Once the bar is in place, the knees will rebend slightly and slide underneath the bar. When the torso becomes more vertical and the knees rebend, it creates a shelf near the hips. Once the bar reaches the shelf, continue to stand violently.

As the knees violently extend under the bar it allows the thigh/hip contact to launch the bar upward and inward. This, along with shifting the shoulders behind the bar, creates a complementing lever arm to further the bar’s acceleration. This is the point at which your weight should transfer from the heels and into the toes. 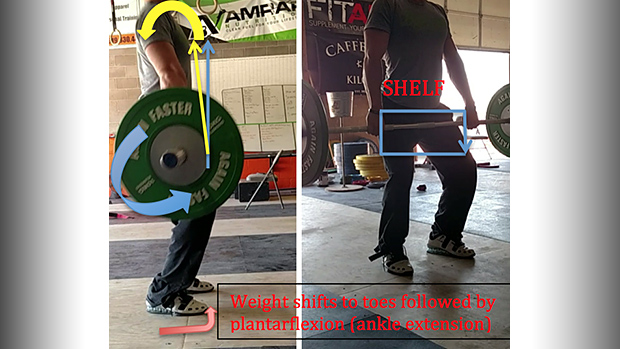 This is the first time you’re actually pulling. Once the knee extension happens with the shoulder rotation, you finally initiate the shrug and pull with the arms. But the purpose of pulling isn’t what most assume. The double knee bend and violent extension should be so powerful it causes the bar to levitate as the extension continues all the way down to the feet. This extension should cause you to float into your toes and just leave the ground.

Leaving the ground isn’t a result of jumping, but a result of extending violently. At this time both the bar and your body should be floating. If you try to pull that bar up, your toes won’t leave the ground because the force of you pulling up will cause your feet to stay planted.

Instead, use this floating period to pull your body under the bar into the receiving position. It doesn’t matter how fast you think you are, that bar will ultimately fall at a faster rate than you can. If you simply use gravity to fall under the bar the tension of your stretched muscles will slow the process. You won’t fall faster than, or even as fast, as the bar.

The reason athletes can get under a bar is because of their ability to successfully time pulling under the bar, which is on its way back down. By using your arms you can get a head start by reversing your upward motion while the bar is still elevating in height. 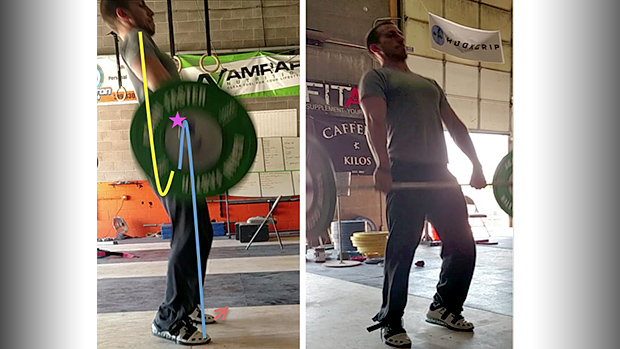 Think about it. Gravity effects each human the same way and its rate of force pushing down on us is constant. How does one lifter accelerate faster than another if this is true? His ability to pull under a levitating bar.

At this point we have completely exhausted every mechanical advantage possible to heave a bar into the air, so much so that we end on our tippy-toes just off the ground. This inch or two your heel is elevated is just enough room to slide your feet outwards to create a more stable, load bearing position. This also allows your hips to drop further between your knees and shortens the distance you need to elevate the bar to get under it.

Let’s take it back just second. Our back and legs have extended violently at the same time, we shifted weight into the toes and are now airborne with another mass that’s levitating in front of us. What to do next? 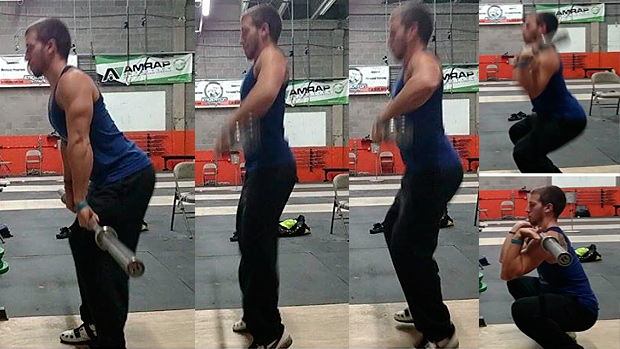 Look at these five positions. Once you arrive at picture two, you’ll realize that the bar doesn’t get any higher. Once you’ve used all your power to accelerate the bar vertically, the final step is pulling yourself UNDER the bar! Yep. That bar should be plenty high enough to get under. With your feet just off the ground you can quickly accelerate downward by using the bar as a tool to pull under faster than gravity can pull the bar downward.

Why You Must Pull Under

Load a bar up with a few hundred pounds. Hold it at waist height. Assume the clean position and pull as high as you can. You’re not getting under it. Now assume the same position but pull yourself UNDER. The weight may not move, but your body will sink under into a receiving position. It’s not about how high you can pull, but how fast you can pull under.

After receiving the bar your feet should be wider than your starting position. The bar is resting on the delts, ideally just off your neck, not pinned against it. Your back is erect and uniformly straight. Having your heels externally rotated allows for your butt to sit in-between your calves instead of behind them. Catching with a stance too narrow and not allowing the hips to drop between the feet will cause the butt to settle behind the heels and may cause an awkward folding lawn chair effect.

During the catch, rotate your shoulders forward and activate your lats. Don’t just point your elbows forward. This makes the delts sit anatomically in front of your neck and allows for a little daylight in-between your clavicles and throat. This not only saves you from clavicle bruising and throat irritation but it decreases the amount of chin over the bar, making it easier to execute the jerk. 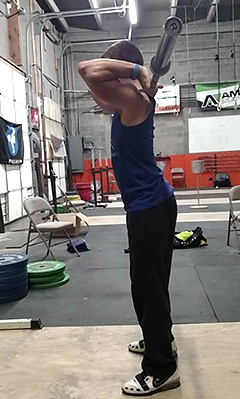 Set the bar on your back as if you were going to do a back squat. Raise your elbows as high as you can until you feel a solid stretch. This is much easier with a bar than a PVC pipe. 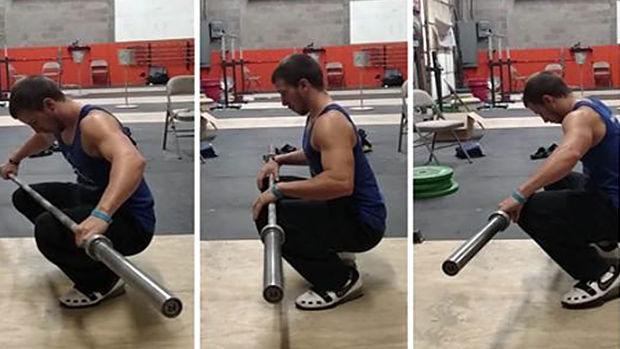 For ankle flexibility, set a bar on the top of your knees at the bottom position of clean/front squat. As you press the bar into the knees you’re increasing dorsiflexion and can rotate side to side to address the glutes and adductors. 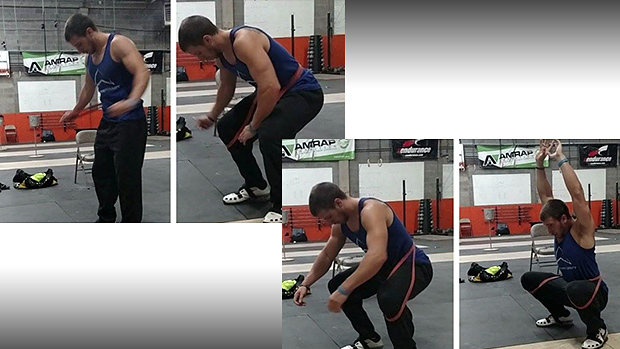 Use a band to wrap around your lower back. Holding it tightly, wrap one loop around your knee and then wrap the second and sit at the bottom position. This does a number of things: