The bench press is one of the "big" lifts. It's reached almost mythic status among lifters, and most would be gravely concerned if a potential training program didn't include it.

Many guys enjoy benching because it's a great way to get their man card from their gym buddies or get a much-needed ego boost every now and then. It's also a must for powerlifters since it's a third of their sport. And if you're training for the combine, you'd better be benching to prepare for the much-ballyhooed 225-pound rep-test.

But what about for field, court, and combat athletes looking to improve their overall performance?

Here at Performance U, we use the bench press, but we don't emphasize it as a pillar lift for athletes. The truth is, it isn't ideally suited for improving the standing pushing actions needed for optimal sports performance.

In this article I'll explain why we feel the bench press is one of the most overemphasized and misunderstood exercises in the sports performance world. I'll also show you three bench pressing alternatives that don't get the love they deserve.

First, please don't get your bench shirts in a bunch. I'm certainly not trying to tell you to quit bench pressing, especially if you're a powerlifter or if you just happen to enjoy doing it.

I'm simply sharing our particular training approach, which uses the bench press in a different manner than what you may be familiar with while providing some insight on how to best fit the bench press into your sports-strength program.

We certainly don't claim to have all the answers – we're just sharing the methods that have worked best for us.

How can we challenge the bench press when it's helped so many high school, college, and pro athletes?

The bench press is one of those exercises that most folks don't bother to challenge because it's just been around so long.

But when you apply some good old-fashioned logic to those arguments suggesting that the bench press plays a crucial role in developing teen athletes, it reveals several important elements that have a much greater impact on athletic success than the little ol' bench press.

High school kids are on a four-year cycle of natural anabolic steroids!

High school boys aged 12-17 will get bigger and stronger no matter what they do because they've got a serious anabolic advantage. When teenaged boys go through puberty (especially the latter stages), they get what's called the "strength spurt," in which their body drastically increases Testosterone production, bone thickness, muscle mass, and motor unit recruitment while decreasing body fat. And it all happens within a few short years.

A good strength program can surely teach teenagers good lifting habits and help them build a solid work ethic. Furthermore, a resistance-training program will accelerate strength gains. But in all likelihood, any strength-training stimulus will have a similar effect when you're on such a powerful cast of supportive androgens.

All you need to do is look at the NFL combine results for proof. Out of the top five bench press records in NFL Combine history, only one player, Brodrick Bunkley (Florida State, 2006) became a remotely successful player.

"Seventeen of the 128 very best combine performers since 2000 went undrafted. Twelve of them never played in an NFL game. Forty-three weren't in the NFL last season. Ninety-five have started fewer than half of their potential regular-season games since they shined at the combine."

All these athletes had "raw" physical ability, but what separated the zeros from the NFL heroes was their ability to use that talent as a platform to express their will and skill to actually play the game.

In other words, physical ability is meaningless if you stink at your sport! And physical training will just make you a bigger, stronger, faster dude who still happens to stink at his sport. It's your skill and your will that makes you a winner.

It's for these reasons that we feel it's completely unrealistic to credit any particular workout program, much less a specific exercise like the bench press, for the success an athlete achieves.

Strength and conditioning gives you the physical fitness to do what you already know how to do. But running faster doesn't help if you're running to the wrong spot on the field, and strength doesn't help if you miss a block or push your opponent in the wrong direction.

If there's any credit to be given to a strength and conditioning program, it's for simply helping an athlete to get more gas in the tank (the conditioning) to express their skill and their will throughout the competition.

Does the bench press carry over into better standing pushing strength?

In 2007, Coach Juan Carlos Santana and Dr. Stuart McGill conducted a kinetic and electromyographic comparison of the standing cable press and bench press.

"This study compared the single arm standing cable press and the traditional bench press to better understand the biomechanical limitations of pushing from a standing position together with the activation amplitudes of trunk and shoulder muscles."

Here's what we consider to be the biggest finding from this study:

First, it's unnecessary for a field, court, or combat athlete (who's not training for a combine) to worry about maximal bench press strength. The principles of mathematics and physics make it impossible for anyone to even come close to matching that kind of pushing force from a standing position, regardless of the stance you're in.

Second, the limiting factor when pushing from a standing position is the stiffness of the torso muscles to maintain your body position and to coordinate the hips and shoulders while stabilizing the forces the extremities (arms and legs) create.

In other words, the standing pushing action is more of a whole body exercise, whereas the bench press is more just an upper-body exercise.

Note: I realize that powerlifters use their hips and lower back to aid in their bench press performance. But they're also lying down and have their shoulders anchored on the bench. So it's still comparing apples to oranges.

The JCS and McGill study abstract concludes with this statement:

"The single arm standing cable press performance also relies on the strength of shoulder and chest musculature; however, it's whole-body stability and equilibrium together with joint stability that present the major limitation in force generation. This has implications for the utility of these exercise approaches to achieve different training goals."

Here at Performance U, we classify exercises as either "general" or "functional." I'll explain the difference between the two and how we use both in the next section.

For now, check out our three favorite "functional" pushing exercises, which all perfectly fit the criteria described above, namely, each of these moves creates a core-limited, whole-body training stimulus. It's also why the following exercises are higher up on our training food chain than the bench press.

Generally, if you're a big dude that can crank out 4-6+ full range one-arm push-ups, you're a stud in our books. For smaller guys, you've got to do at least 7-10+ for us to give you your man card.

Although the one arm push up isn't performed from a standing position, it still heavily involves the core, hips, and lower body. When performing one-armed push-ups, you're promoting unilateral strength, which builds better left/right side muscle balance and brings in more core activation.

But you're also training the "serape effect," which is the force production relationship between your shoulder and opposite hip (through the torso) that's responsible for actions like running, throwing, punching, etc.

Here's how we teach our athletes to perform one-arm push-ups:

Once you've become proficient at doing one-arm push-ups from the floor, you can progress to using a weighted vest and/or the foot-elevated version that I'm showing off here:

Note: Check out my Everything Push Ups article for the exercise progressions we use to build up to doing one-arm push-ups.

If you can't do one-arm push-ups, or you're currently working up to doing them, the standing one-arm cable press is a great training option.

Most of the time we see folks using this exercise the weight is too light to create an effective strength challenge. That's a mistake.

Check out the video because there's several key strategies we've developed to help our athletes perform this exercise safely and effectively using a challenging load!

In sports you're not always pushing straight ahead but slightly upward, such as when trying to control an opponent's shoulders in MMA or getting underneath a players shoulder pads in football. This is a great exercise to help you perform those actions.

As I said above, we classify exercises as either "functional" or "general." And we use both general and functional exercises in every sports performance workout we do to ensure our programs are fully comprehensive and maximally effective.

I'll admit it's not a perfect classification system because both types of exercises can improve functional performance. But it's the best system we've come up with to date, and it hasn't failed us yet. So, don't get too caught up in the terms and focus on the concepts.

We use "functional exercises" like the ones shown above to replicate the specific force production patterns involved in standing pushing movements to improve the neuromuscular coordination involved with performing those patterns.

Some people might rather call these "special strength" or "specific strength" exercises if they're into the three-tier eastern block stuff. For us, we like to stick with the two categories as stated above.

Anytime the words "functional training" come up, the typical strength training enthusiast's reply is something like, "Don't worry about making the exercise look like the sports movement – just get strong and you'll be more functional."

But let's discuss what some coaches would have me do if they wanted to improve my bench press.

These exercises are all commonly called "assistance exercises" because they assist in improving the bench press by training various components of the lift. They also replicate the specific force production patterns of the bench press.

So to improve my bench press, I should do lots of stuff that's similar to the bench press action – surely you don't believe that using assistance exercises to improve performance only applies to the squat, deadlift and bench press?

In this article I've given you theoretical, logical, scientific and practical reasons for why we do what we do to help our field, court, and combat athletes to improve their standing functional pushing strength.

To help you better understand the concepts discussed in this article, here's a quick review of the key points: 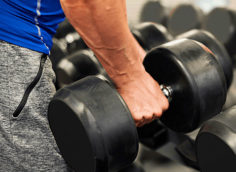 Strength is the foundation of all athletic qualities. Here's what you need to do to build it and improve across the board.
Powerlifting & Strength, Training
Eric Cressey March 8

Deadlift stuck? Then you're probably missing one important thing. Here it is.
Deadlift, Powerlifting & Strength, Tips, Training
Tony Gentilcore May 12