The APFT is conducted during the soldier’s initial entry/basic training and then at their unit every six months. The soldiers do this test collectively, usually at the platoon level (that’s a team of about 30-50 soldiers). Diagnostic testing may also occur during deployments to combat zones and other countries, but these don’t involve testing “for record.”

This new test is a huge step in the right direction. The old APFT may have been logistically simpler to implement, but it lacked the testing of critical physical skills that the new ACFT measures: power, absolute strength, and anaerobic conditioning. Also, unlike the old APFT, the ACFT is gender neutral – there won’t be different minimum standards for females or males.

Understanding specifically what the ACFT is testing will help soldiers understand how to train for it. And if you’re not planning on enlisting, it would still be a “fun” way to test your readiness. 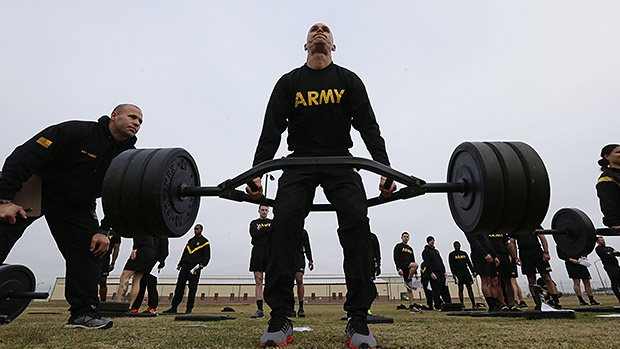 This test is a display of your absolute strength. Bodyweight circuit training isn’t going to cut it for this one! Being absolutely strong is a practical thing – picking up heavy artillery shells, throwing an M2 .50 caliber machine gun over your shoulder, or climbing over a wall while wearing 100 pounds of kit and body armor isn’t going to happen without some raw strength. You’re going to need to spend time in the gym lifting weights… heavy weights. 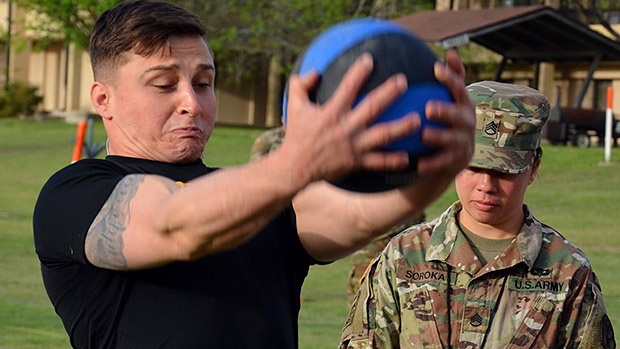 2 – Standing Power Throw: 10-pound medicine ball thrown over and behind the head

Throwing a grenade, jumping over a ditch, tossing an ammo can to the gunner, kicking down a door – all of this requires the ability to generate force with high velocities. You need to be explosive and violent. Sharpening your reflexes and focusing on plyometrics and a few weighted movements are going to be your best bet – things like different varieties of jumps, throws, slams, swings, and Olympic lifts. 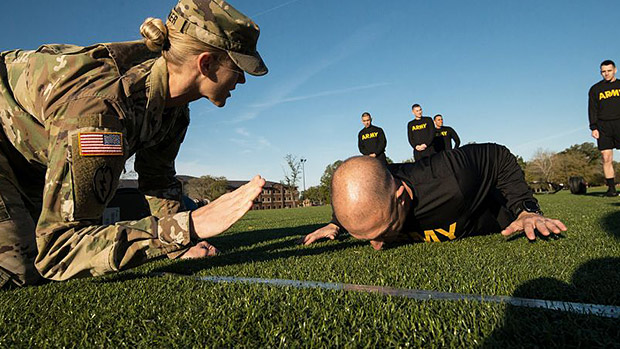 3 – Hand-Release Push-Ups: as many as possible in two minutes

If the soldier already has a level of general, absolute strength, then this event will be a test of muscular endurance. However, when a soldier is extremely weak, this becomes a test of their strength, and soldiers need to train accordingly. 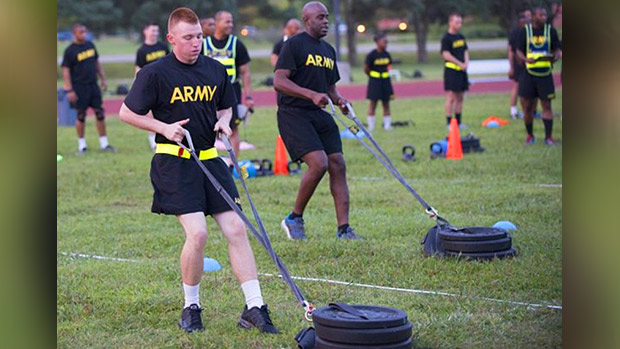 This is a new form of conditioning for the Army, yet it’s the most representative of what soldiers might see on a battlefield: sprinting to cover, dragging your buddy to safety, carrying ammunition 50 meters to the front.

This test requires anaerobic conditioning, so being a good distance runner isn’t going to cut it. You need lots of muscle and lots of stored glycogen. Development of this type of conditioning requires a combination of “resisted” training like farmers walks, yoke carries, sled drags/pushes, and buddy/log carries, along with “unresisted” training like various sprints and bear crawls. 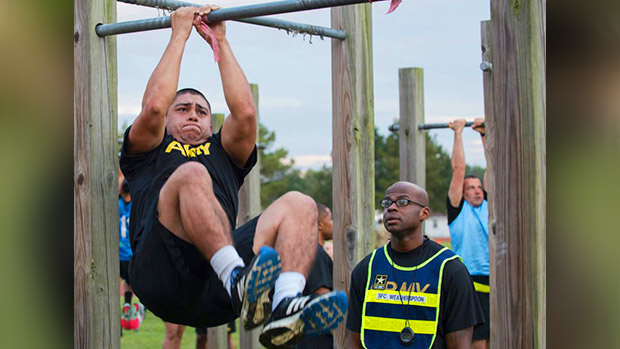 Like the hand-release push-up, the leg tuck is going to be an endurance test for some and a strength test for others. Generally speaking, the smaller guys are going to see this as endurance training whereas the big boys will have to look at this as part of their strength training. 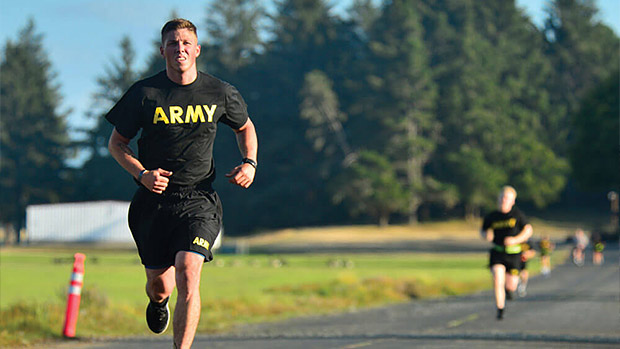 Everyone who hates to run pulls the old “I’ll never need to run for two miles in combat” card, but they’re missing the point. This test evaluates aerobic capacity: overheat and seize up, or run cool and efficient under high stress and nasty hot weather.

I’ve seen plenty of big boys drop out as heat casualties while their weaker, yet longer-distance running counterparts kept chugging along in temperatures of 145 degrees.

There needs to be a healthy balance.

How to Prepare for the ACFT

The best approach to training is to create training slots that are themed for each aspect of performance. That allows you to stay organized while forcing the body to adapt.

A common mistake is to “cross contaminate” the different performances in an attempt to make it harder. Unfortunately, when it comes to adaptation, all this is doing is robbing Peter to pay Paul. Keep the cross-training to a minimum and focus on development.

Here are the training themes you’ll need to hit:

With the organization established, it’s time to define who you are. Does a light infantryman need to be trained like a heavy mechanized artilleryman? No. So I’ve provided two basic breakdowns, the first for the soldier that needs a conditioning bias and the second for the soldier who needs a strength bias.

Both will get you to pass the ACFT with flying colors, but more importantly, choosing the one appropriate for your role will get you in the shape you truly need to be in to fulfill your warrior duties.

Save 10 minutes at the end of your training session for an aggressive body weight smoke-session. As an example, do a few rounds of the following circuit for 10 minutes:

This is the last training day of the week, so leave it all out there.

The Army is trying to make a new soldier. Don’t get left behind. Get organized, get focused, train hard, and become the modern super soldier.