I started weight training back in high school as a way to get over an ankle injury and to build some muscle, and hopefully catch the eye of any female in the general proximity with two legs and an audible heart beat.

One day I was doing what I thought was a bench press – and what most would call having an epileptic moment – when I noticed one of my most coveted crushes happened to be working out. This girl had no idea I even existed, so I decided to throw an extra 90 pounds on the bar and really get her attention.

It worked. A weight room attendant having to drop everything to rush over and pull a barbell off some dorky kid's neck never fails to draw an audience.

Sadly, this type of behavior was standard procedure for me, so it's not surprising that I wound up developing rotator cuff issues, scapular stability issues, neck problems, and other fun results of stupidity and recklessness.

The good news is that experiencing all these mishaps and having to bounce back eventually taught me how to bench press without experiencing days of shoulder-throbbing agony and a general sense of hating life.

That's not to say I'm any good at the bench press now. My bench is so bad Waldorf and Statler from the Muppets routinely heckle me from the balcony that was recently installed in the gym. But at least I can rock it out without searing pain in my shoulder anymore.

The following are some things I've used with myself and clients who've had a history of shoulder pain and problems. However, if you have pain, you should seek council from a qualified health professional before beginning any of the exercises or taking any of the recommendations. General advice is not meant for specific issues, so if you need some treatment, get it first, and then see if this is going to work for you.

Another thing to consider is even though the goal of this program is to allow you to train your chest without being wracked with pain, we must consider the entire shoulder as a unit instead of simply individual muscle groups.

I've never been a fan of the typical training splits that work chest/arms one day and back/shoulders the next, or alternating pressing and pulling days. Most painful issues are the result of imbalances between the pressing muscles and the pulling muscles, and typically the shoulders are imbalanced towards forward flexion and thoracic kyphosis.

In other words, most common bodybuilding programs are inherently imbalanced, and are likely causing the issues they're trying to fix.

A tall building must have a strong and powerful foundation, as the stronger the foundation the taller the building can become without toppling over.

What this means for building a massive chest and powerful press is that if your shoulders aren't able to provide an adequate base of support, there will inevitably be slipping of the humerus in the glenoid fossa, altered positions of the scapula, and irritation of one structure or another.

Powerlifters will tell you to flex your lats and rhomboids to help gain some stability through the lift, which is somewhat counterintuitive. Why use pulling muscles to do a pressing movement?

If the pecs pull the humerus forward, there has to be a reciprocal force acting on the back of the humerus to create rotation in the joint, otherwise there will be movement in the capsule, resulting in that familiar pinching and burning sensation many of us get from aggressive chest training.

In order to have a strong foundation for pressing movements to occur, you have to do some back building exercises as a primer. Some of the best shoulder guys in the business recommend a ratio of 2 pulling movements for every pressing movement, and I'd even go as far as saying that when there's even a hint of shoulder pain, that ratio should be closer to 3:1 pulling to pressing.

Organizing a workout this way offers a better chance of up-regulating the stabilizing muscles of the shoulder to provide a powerful foundation without causing any additional irritation to the shoulder itself during the pressing movements.

As mentioned, powerlifters tend to pull the shoulders down and underneath their ribs to give the best stable foundation possible to press large amounts of weight. This has the added bonus of tipping the shoulder blade back to provide some level of clearance for the humerus to rotate without abraising any tissues that get in the way.

One of the first things I check when training a new client is during push-ups or chest presses: can they hold their shoulders down and back with a long neck, or do they let their shoulders creep up and their backs round? 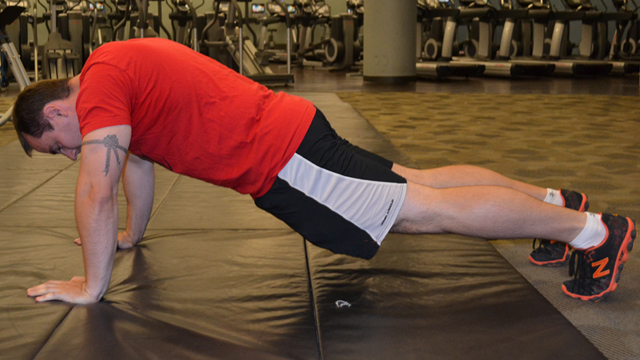 This position is common for those who work in corporate cubicle farms, and breeds a growing subculture of no-neck sporting, wide-elbowed pressing commercial gym Quasimotos.

The combined lack of scapular stabilization and upwardly tilted and rotated scapula means the movement involves less of the pecs and more of the upper traps and anterior deltoid, resulting in jacked-up traps and a chest narrow enough to carve a Christmas ham.

The easy fix for this is to have the person pull their hands closer together, squeeze their armpits like they're holding oranges and they're trying to make orange juice, and keep their chest up with a long neck. 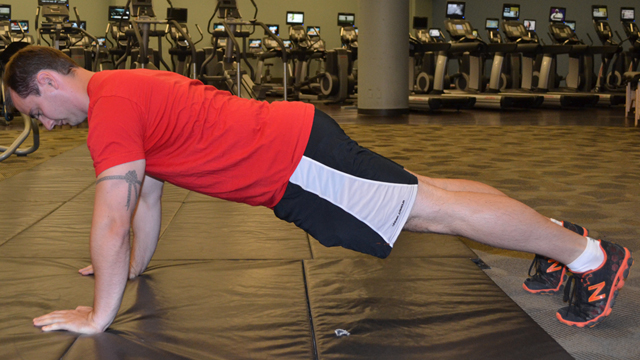 This position offers the best chance of providing both a solid, stable foundation and scapular position to press without irritation. It also forces the pecs to do the work in moving the arms instead of the upper traps and deltoids, providing your neck a level of relief and some kind of chest meat for members of the opposite sex to hang on to during various precarious situations.

When most people press either with dumbbells, barbells, or even a simple push-up, the line of action is typically with the elbow flared out to the side, fixing the arm into an internal rotation position and increasing the contact pressure on the already irritated tissues of the shoulder.

Add to this the fact that the scapula has to rotate out and up to accommodate the wide elbow position, which means the scapular stabilizers have to work overtime and will generally fatigue quickly, and you have a recipe for disaster.

The supraspinatus tendon comes in between the humerus and acromion process, and bringing the arm out to the side with an internally rotated position causes the two bones to get really close, and winds up rubbing the tendon tighter than in an externally rotated position, especially as the arm moves from the bottom of the movement to the top and the humerus comes closer to the center of the body.

The downside to using a fixed hand position barbell is you can't bend the bar to alter your hand position, so using fixed bar positions aren't in your favor, especially if you use a full, deep range of motion. If you must, use a towel or board between your chest and the bar to reduce the range of motion. If you have access to one, a football bar works perfectly, too.

Try setting up with a different line of action, such as doing a dumbbell press with a neutral grip instead of a pronated grip. This also helps reposition the shoulder so that the rotator cuff muscles (specifically infraspinatus, teres minor, and supraspinatus) are held shorter, allowing for a greater level of force development during the movement and leaving it less vulnerable to further damage.

Another variation is to supinate throughout the press, making it a spiral movement instead of a linear one. This movement works like doing a chest press and lat pulldown at the same time due to the lat activation you get with the external rotation.

One last point on the line of action is that most people tend to go for the end range of motion stretch, which causes a lot of shifting of the scapula to occur just to get the arm back there. Limiting the range by using floor presses, board presses, and other reductive tools helps to save the shoulders while still working the pecs adequately.

This workout will have you training your chest and back on the same day, twice a week. The main variance between the two days will be intensity.

Day one will focus on heavy chest and moderate back, stability, and postural positioning.

Day two will have a moderate chest and heavy back, focusing on building strength to counter the pull of the pecs during the compound heavy movements. Much like every sports car needs a brake, every chest training program needs a strong back.

Day One: Heavy Chest/Moderate Back

For each series, the first exercise will be performed for 10 reps; the second for 15 reps; the third for 5-8 reps; and the fourth for 20 reps. Complete 5 sets per series using minimal rest periods between sets.

The main focus will be on simply activating the back muscles for the first two exercises in the series, not fatiguing it. This is important because if the back and shoulders are too fatigued, they won't be able to stabilize properly for the ensuing chest exercise (exercise C) in the series.

* Used to increase thoracic extension, not lat activation
* * The board/towel press is done with bands or chains (if available) to reduce the pressure at the bottom of the movement (when the shoulder is most vulnerable) and increase it at the top (when it's most stable).

The following video shows how to set up a bench with accommodating resistance in an average facility. Using towels/boards reduces the range of motion available, leading to less chance of compromising the shoulder during the movement.

For day two, the focus shifts away from heavier chest and lighter shoulder/back work to heavier back/shoulder work and moderate chest work.

For this day, exercises A and B will be completed with a challenging weight for 5-8 reps, exercise C will be for 12 reps to a non-fatigued state, and exercise D will be for 15 reps. Complete 5 sets per series using minimal rest periods between sets.

The point of this article is less about featuring a bunch of esoteric exercises and more about showing you how to bring unbalanced shoulders back in line while building a set of picture-perfect pecs.

Build a solid foundation, ensure quality movement in the right areas, and victory will be yours. No weight room showboating required!

The Zercher squat is getting more popular. But have you tried the Zercher deadlift? Here's how to do it.
Exercise Coaching, Tips
Christian Thibaudeau February 2

Are you really mastering a lift or mobility drill? Probably not. Here's why.
Deadlift, Mobility, Tips, Training
Tom Morrison July 29 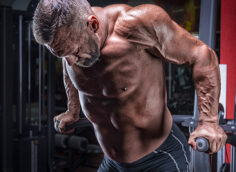