Watch any TV show about weight loss and you'll see a lot of crying, hugging, and syrupy sweet one-liners about having a positive attitude and "freeing the rainbow-love in your heart..." whatever that means. But here in the real world, successful people often get angry to fuel positive changes.

Success story Chris Bartl describes his experience like this: "I didn't like the way I looked, the way I felt, or the way I was leading my life. I was fat and it pissed me off."

Chris didn't feel sorry for himself, he didn't stand in front of the mirror repeating positive affirmations, and he certainly didn't join a support group where other unhealthy people could pat him on the back and tell him that fat is beautiful. He got angry... and then he got shit done.

"People who get angry and fed up with being out of shape always have the most amazing, lasting transformations," says Olesya Novik. "They feel like they've got nothing left to lose, so they push themselves and keep coming back for more."

Why does anger work? Well, the human animal is a predator. He doesn't track and kill his prey by kinda-sorta wanting it. Achieving a goal isn't a marathon; it's a sprint. You have a short, intense window of opportunity to break bad habits and smash through obstacles.

"Successful people share a willingness to get uncomfortable," Alwyn Cosgrove says. That applies to their training, diet, and lifestyle. Now, how does a self-pitying whiner deal with discomfort? He quits or blames others. How does a guy or gal who's willing to channel some "good anger" deal with it? They fight through it. And win.

Anger isn't the only politically incorrect emotion that comes into play. "Significant change comes with getting a little selfish," says John Berardi, Ph.D. "That doesn't have to be a bad thing, although some of your friends and family may think so."

Even if it feels weird to set aside time for yourself and your own self-improvement, it's the only way to pull it off. You have to get a little selfish and take some of your time back. That allows you to avoid distraction while focusing intensely on a single goal.

Another dickish trait common to success stories is a certain sense of superiority. You don't have to hold the weak-willed people around you in contempt, but it helps to remind yourself that you're stronger and more determined than people who skip workouts and succumb to the siren call of Dunkin Donuts. If you feel guilty about your newfound arrogance, remind yourself that it's temporary. Use it, get what you want out if it, and then drop it like a bad relationship.

Take-home lesson: Positive changes often occur with the use of a negative attitude. Being an angry, self-centered jerk with a superiority complex helps body transformers reach their goals. Just be sure to cut that out when you're done. 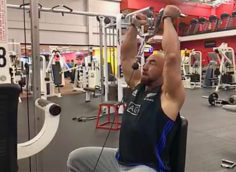 This cable exercise does a great job of smashing both the anterior and medial heads.
Bodybuilding, Exercise Coaching, Shoulders, Tips
Paul Carter November 12

Some say straps lead to a weak grip so they never use them. Others use them for damn near everything. Here's the smart lifter's approach.
Bodybuilding, Powerlifting & Strength, Tips, Training
Dr John Rusin September 11

When you do triceps extensions, use a decline bench instead of a flat bench.
Tips, Training
Christian Thibaudeau October 13