By doing it this way, you’re not having to overthink the whole low-medium-high carb day thing. You just adjust your carb intake on workout days in accordance to your training load/volume. After all, you probably don’t need a ton of carbs for glycogen replenishment after a 30-minute arm workout, but you might need a sizeable amount if you’re a very large individual and just did a two-hour leg workout.

You also don’t need to cram all of your post-workout carbs into some tiny 30-45 minute window after training. You have a larger post-training window where you can take advantage of elevated glycogen resynthesis.

Training-day carb cycling is based on the amount of volume you did (the number of exercises, sets, reps etc.) and what you worked in that training session. As noted, you probably don’t need the same amount of carbs after doing a quick arm workout as you do for squat and deadlift day, and this is where there’s a bit of flexibility meshed into the plan.

The two largest body parts are legs and back. However, depending on how you split your program up, a chest and shoulders workout could very easily be considered a “big” workout day. If you’re doing 15 sets for chest and then another 10-12 sets for shoulders, that’s 25-27 sets done in a session. That would most definitely fall into the category of a big workout.

For the third meal (if there is one, depending on the time of day you train), you’d go to a protein and fat only meal. That means no carbs.

All you’re going to do here is cut the amount of carbs in half from what you’d take in after a big workout. Using the sample above of the 200-pound lifter, he’d take in 25 grams of carbs in each of his two post-workout meals. All the other rules applied for big workouts stay in place here: high-GI carbs for the first post-workout meal, and low-GI carbs for the second one. 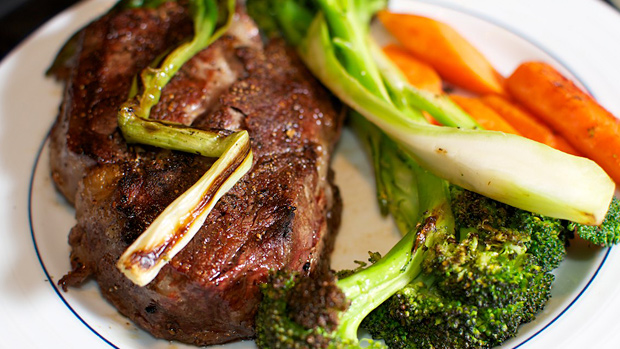 As for the rest of your meals on a training day, if you’re working to get leaner, then pound down the protein to the tune of 1.25 to even 2 grams per pound of bodyweight (depending on your level of experience and degree of muscle mass). The rest of your caloric intake should come from fats and only trace carb sources like vegetables. As a baseline recommendation, your calories should be somewhere between your bodyweight x 10-15.

Bodyweight x 15 tends to be about the range most people will need to maintain their current bodyweight, and 10 is the “floor” in regards to caloric intake. If you need to get into a larger energy deficit to get even leaner, then do more work rather than reduce calories further.

Get almost all your calories from proteins and fats. As far as fat sources, go with almonds, macadamia nuts, almond butter, coconut oil, and olive oil. And there’s really no need to count vegetables as carbs. Not a single person ever failed fat camp because they ate too much steamed broccoli.

The only real complicating factor in all this is that people train at different times of the day. Some people are morning lifters, some are mid-day, and others train in the evening. Here’s how each type should implement carb cycling into their plan:

The listed foods can be exchanged for something similar and the amounts will vary based on a myriad of factors, but this is a solid template to build from to get you moving in the right direction. If you’re already lean, you can use this plan to gain mass by simply playing around with the amount of post-workout carbs until the scale starts to move.

If you’re a low volume-high intensity guy, then your workouts probably don’t exceed 45 minutes. If that’s the case, then just drinking water with added Mag-10®, or even just some added BCAAs or EAAs are a great option.

If you’re training with a lot of volume for a couple of hours, then using Plazma™ is ideal. Even if you’re in fat loss mode, the simple carbs it contains aren’t going to be stored as body fat.