Every lifter, every "fitness person," anyone at all interested in eating right, just has to get an Instant Pot. That's all there is to it.

For most of us, eating healthy is a pain. It takes a bunch of pots and pans. It takes initiative. Above all, it takes time. But with the Instant Pot, you can hard boil a dozen eggs in 5 minutes just by throwing a cup of water in the damn thing and turning it on. You can cook a whole chicken in 24 minutes, and it'll be the juiciest damn thing you've ever eaten.

You know the steel-cut oats you never make because they take 30 minutes and you have to stir them constantly? Just 10 unattended minutes in the Instant Pot. You can even cook an entire steer in 90 seconds! 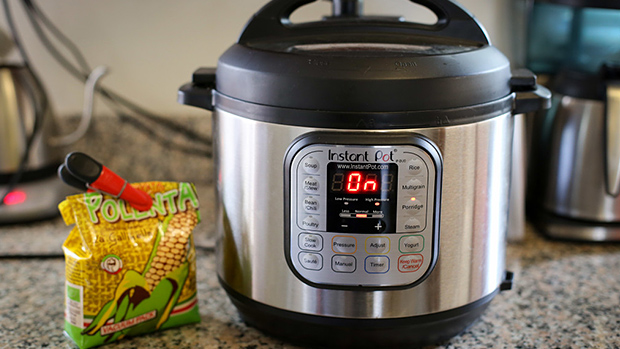 The Instant Pot is the creation of Robert Wang, an engineer from Ottowa who was bothered by the fact that he didn't have time to make healthy meals for his wife and kids.

To fix the problem, he recruited two other engineers and invested $350,000 of his own money to build a device that would combine pressure-cooking, slow-cooking, sauteing, and just about anything else you can do on a stove into one device.

Enter the Instant Pot, a device that looks like what they used to store baseball player Ted William's cryogenically frozen head. Inside the Instant Pot is a stainless steel cooking sleeve with no chemical coatings.

It cooks food up to 16 times faster than normal and it even makes old white people food like chicken and dumplings taste as good as something you can get in a 3-star Michelin restaurant. The price ain't that bad either. You can pick up an 8-quart (recommended) Instant Pot for around $100.

And, for those so inclined, you can also use the Instant Pot to make yogurt, cinnamon rolls, pancakes, cheesecakes, and just about any imaginable staple or delicacy.

When you boil water on the stove, the hottest you can get it is 100 degrees Celsius, but when you pressurize it, like with a pressure cooker, the temperature inside jumps to 120 degrees Celsius.

That's because the cooker traps the water molecules that would ordinarily escape as steam. Trapped water molecules keep bouncing against each other faster and faster, pushing the temp well past 100 degrees.

And not only does cooking happen faster, it happens better. The pressure shoots moisture through whatever is in the pot. The result is more succulent cuts of meats, more delectable grains, and more luxurious desserts.

One clarification, though. While it cooks incredibly fast, the Instant Pot requires a few minutes to build up pressure, along with a few extra minutes at the end of cooking to slowly release pressure. Regardless, you save a huge amount of time.

In every official promotional shot of the Instant Pot, the cooker's time is set to 5:20, which, when spoken aloud, allegedly sounds like "I love you" in Robert Wang's native Mandarin.

Of all the effective supplements available these days, one of the best is still good 'ole protein powder. That's because without enough quality protein, then all the other issues involved in bodybuilding – training, recovery, hormone manipulation etc. – are pretty much meaningless.
Nutrition & Supplements, Performance Proteins, Protein
T Nation February 15