Science has taught us a lot when it comes to training: warming up correctly, muscle activation, flexibility, speed before strength, periodization, max effort days, dynamic effort days, GPP, Tabata protocols, etc. This has advanced our knowledge of the theory and methodology of training a million-fold.

The Holidays: A Bodybuilder's Nightmare

It's the holidays. You've eaten a ton of candy, passed out in a turkey-induced coma, your girlfriend suddenly expects bling, you spent hours searching Toys R' Us to find whatever Elmo doll is hot this year for your niece, and your fitness level tanks faster than some of TV's fall line-up. But it doesn't have to be that way.

You can remedy these problems with a little willpower and some Grow! bars, a timely breakup, and looking for Elmo online. That last problem is an easy fix, too. All it takes to stay in top shape is a little preemptive strike in the form of a well-designed program.

The holidays generate a lot of unavoidable, often random time drains, such as office parties, family get-togethers, and after-work shopping. And of course, you don't want to miss the American IdolChristmas special. These social events take a chunk out of your life and make it difficult for you to maintain your normal training regimen.

Now, I know that some of the hardcore T-Nation readers out there would never dream of going to visit Grandma when it's leg day, but the more psychologically balanced among you will appreciate the problem. You see, most guys make the mistake of trying to fit their regular workouts into their busier, more unpredictable holiday schedule. This never works and inevitably leaves them missing workouts and feeling frustrated.

Instead, they need an exercise plan that's compatible with their schedule - no matter how packed it is.

Most coaches will tell you that in-season is the toughest time for their athletes. Practices come frequently and games are regular and competitive, so conditioning is the one thing that must be put on maintenance. It's not uncommon to see some of my top athletes only get in two conditioning workouts per week.

The holidays for the regular guy present a similar challenge. Do we take Halloween through New Years as the off-season and just allow ourselves to lose muscle and gain fat? Do we make a feeble attempt at maintaining our four-day-a-week program that will inevitably lead to failure? Or do we accept the scheduling issues that arise and develop an entirely new workout schedule to help us not only maintain through the holidays, but maybe even make progress?

This is where my "in-season" split for athletes can be used to maintain or even build upon your fitness levels throughout the holiday season - with as little as two workouts per week. You see, my athletes are busy with games, practice, and traveling during the season. Something has to give. And if we've developed enough over the off season and pre-season, we can afford to cut back.

The key to maintaining your conditioning is to develop a program that allows for the lack of volume but doesn't ignore science. We need to use a method of training that avoids the adaptation drawbacks that are present with most training programs.

The big problem is how to integrate all the various strength qualities to maintain what took you so long to develop. You see, you adapt to a program in as little as six exposures, and it's hard to juggle all your training modalities at once (speed training, endurance work, strength, etc.), particularly when you're crunched for time.

A recent method has surfaced that has the stamp of science approval on it and is actually useful enough to allow us to try it in the real world. Is it the perfect program? Doubtful. Is it perhaps the most effective training method for the more advanced trainee, particularly when time pressed? Quite possibly.

Recently published research from Arizona State University has shown that a method of structuring the set and rep protocols in a vastly different manner - called undulating periodization - has proven to be especially effective in inducing maximum strength gains when compared to traditional linear or alternating periodization models.

Undulating periodization takes the adjusting of rep protocols one step further. This system actually adjusts the rep bracket with each workout.

With traditional periodization, this means that a workout will "work" for at most three to four weeks. This is when we change the routine to prevent staleness, introduce a new stimulus, and keep the body adapting positively. Typically what happens is we change the exercises and the reps.

With undulating periodization and the variable rep system, we take this a step further. You won't repeat the same workout for over four weeks. This means the body won't have adapted, i.e. you won't need to begin a new routine for close to twelve weeks, despite the fact that you're hitting each body part once a week and performing the same exercises every week.

This will take you right through the holidays without getting stale. In fact, you could easily stay on this program for a longer period of time. As we aren't repeating the same rep range for four weeks, you could do the entire program for eight to twelve weeks and then just switch the exercises. A constant challenge equals constant improvements.

The Geeky Science Behind Undulating Periodization

The May 2002 issue of The Journal of Strength and Conditioning Research reported that experienced strength trainers who followed this type of training program doubled their strength increases as compared to a traditional training control group. It concludes that ongoing strength gains for those who've hit plateaus may be developed from this type of training.

My immediate "outside the box" thinking led me to the conclusion that if this workout system was superior to regular periodization, then the benefits during a period of low-frequency training would be even better.

In the interests of clarification as to how I use the method, I've included a workout split (based on a movement pattern split) with some very basic exercises that I use with my athletes. You don't need to follow this split, nor do you need to select these exercises. What you do need to stick to though is the sets and rep parameters. In practice, just alternate between the two exercise routines and move to the next rep range as prescribed below.

However, due to the unique loading parameters, you'll actually train each program, in terms of exercise, three times before ever repeating a rep scheme. The fun part is the variety of doing so many different routines. The exciting part is that as you only repeat each workout every three weeks or so, you can stay with this program for longer and make better and faster gains than you typically would. It'll be approximately week four before you repeat a workout.

The temptation of this type of workout is to change the exercises every single time as well. I urge you not to do this. As much as you need variation, you still need repeated exposure to the same exercises to really get the benefit. Stick with the first exercises you choose for at least the first four to six weeks before changing.

I came up with the workouts based not on science but on reality. My athletes needed to train every part of their body for power, speed, strength, and endurance. So I selected exercises, sequences, and rep ranges that would allow us to "vertically integrate" (a term created by Charlie Francis) the different qualities in a more applicable fashion.

Note here that I haven't given the details of the energy system work or agility drills that we also use, but typically we use a Tabata based energy system protocol (20 seconds on, 10 seconds off for 8 sets) and some type of metabolic work using complexes or bodyweight circuits for 5-10 minutes at the end of each workout.

Select one exercise in each category and perform it until you've done each rep range three times:

Select any four exercises and perform back to back, non-stop in a circuit for the required sets and reps.

This is where this program gets really different. You're going to alternate between the workouts as written above, however, each time you perform each workout you're going to use a different set, rep, and rest period protocol.

Select weights that'll be challenging for the given rep range. Let the rep range dictate the weight.

Here's a basic outline of how this would work in reality. For example (training twice a week):

If you can make it into the gym for a third day, just select the next day's exercises and the next workout in the schedule. For example (training three times per week):

The key is that you never do the same exercises or reps two workouts in a row.

When science and reality bump heads, reality wins. A lot of strength coaches are too close-minded to accept that the weight room program has to be adjusted in-season, particularly in terms of total training days. The in-season is a time to maintain all the strength qualities that you've built up over time.

The key to avoiding problems in your annual workout schedule is in advanced planning. When we hit the holiday season, the regular guy needs a plan also. You can either treat the holidays as the "off-season" and get fat, or you can plan in advance and switch to an in-season workout. Using an undulating periodization plan will help you to not only maintain your physique through the holidays, but even see some gains because of the new stimulus.

Enjoy your training and enjoy your holidays with your families and friends!

These stretches are common, but they often lead to even more painful problems. Here's what to do instead.
It Hurts Fix It, Mobility, Training
Dr John Rusin November 14 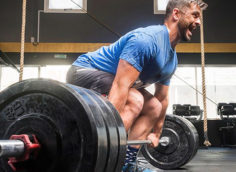 It doesn’t matter if you want to lose fat or build muscle. There’s something else you need to do first.
Bodybuilding, Tips, Training
Eric Bach July 15

Strong muscles are awesome, but weight training can teach you lessons that go far beyond the gym. Here they are.
Bodybuilding, Opinion, Powerlifting & Strength, Training
T Nation February 17