Building strength is a war against the iron, and sadly it's a war that most end up losing! The stronger you get, the harder it is to push the envelope, and there comes a point when busting your ass on the basics isn't enough anymore.

When that time comes, resorting to some high-tech tactics is in order.

Here are a few used by great coaches to get people inhumanly strong. Obviously, don't be an idiot and use all of them at the same time!

This is a method brought to life by the great Canadian coach, Pierre Roy. It's also been used in several strength protocols from the Eastern bloc. It consists of performing the lift you want to peak your strength on twice during your workout: once at the very beginning and once again at the end.

"Why not simply do more sets at the beginning of the workout?"

That'd work to some extent, but the motor learning and technical efficiency aspects wouldn't improve much. If you perform all of the sets of one exercise in the same period, you eventually fall "in the zone," meaning that your nervous system is on automatic and there are fewer opportunities to "learn."

When you do half of your sets at the beginning and half at the end, you have to get yourself in the groove twice, making the nervous system work harder to maximize intra- and intermuscular coordination.

Not to mention that this method is a great way to boost the training volume on a lift without getting bored to death!

While cluster training was popularized by Charles Poliquin, it's pretty much how all Olympic lifters train (you'll see why in a few seconds).

Olympic lifters train this way because when they do reps on the competitive lifts they drop the bar and reset after each repetition.

The working premise of clusters is that they allow you to perform more reps with a given percentage. A ten-second pause is enough to allow for partial ATP regeneration, the clearance of metabolites, and neural recovery.

So, when you do clusters, you should shoot for two or three more reps with a target weight. If you can bench 315 for three reps, shoot for cluster sets totaling five to six reps.

It's important to note that you should replace the bar on the hooks between each rep.

Clusters are very demanding on the nervous system, so there are a couple of rules to follow: no more than one cluster per structure (or muscle) should be used in a workout and only for three to five sets.

This technique was used by a lot of powerlifters in the '80s. Dr. Fred Hatfield and his 1014-pound squat recommend supports with 110% of your maximum at the end of heavy workouts.

Supports simply refer to holding the weight at the beginning of a movement. For example, you'd put 110% of your maximum on the bar in the bench press, unrack the bar, and hold it in the locked position for five to ten seconds.

Contrary to supramaximal negatives, this method allows you to get used to handling heavier weights than you can lift without risking injury. Maximal lifting is as much psychological as it is physical. Getting used to big weights will make your regular lifting "feel" easier and your chances of success will go up significantly.

The idea of small loading was brought to my attention by Dr. Mel Siff, and it's another fine psychological mind game. It consists of loading the bar with small plates, and the more confusing the loading is the better.

Normally, if you wanted to load the bar to 225 pounds, most people would put two 45-pounders on each side. With this method, you might put two 25-pound plates, two 10-pound plates, and three 5-pound plates per side, and not necessarily in that order (or even in the same order on both sides).

And it works even better if you have a training partner loading the bar for you since it's harder to mentally calculate the weight.

This method removes the psychological intimidation factor that some people have. With "wheel increments," there's a psychological block that comes from the multiple 45's per side. For some reason, loading the bar with smaller plates is less intimidating and will put you in a more confident mindset.

Isometrics – the act of pushing or pulling against an immovable resistance – were first introduced to the strength community by Dr. John Ziegler with his work on Louie Riecke and Bill March. It was then widely publicized by Bob Hoffman.

One of the most important benefits of isometric training is that it's the contraction regimen which yields the greatest motor unit activation.

A recent study comparing the level of muscle activation during isometric, concentric, and eccentric muscle actions found that one can recruit over 5% more motor units during a maximal isometric action (95.2%) than during either a maximal eccentric (88.3%) or maximal concentric action (89.7%). (Babault et al. 2001)

What this tells us is that isometric training can improve our capacity to recruit motor units during a maximal contraction. So, including this type of training in our regimen can improve our capacity to activate motor units, even in dynamic actions. In the long run, this improved neural drive can greatly increase one's strength production potential.

However, it's important to understand that the strength gains from an isometric regimen occur chiefly at the joint angles being worked (Roman 1986, Kurz 2001), although there's a positive transfer of 20 to 50% of the strength gained in a 20-degree range (working angle plus or minus 20 degrees).

Some people might see this limitation as a negative aspect of IAT. However, you can view this as a benefit, as it allows you to exert a greater level of strength at a certain point in the motion, allowing you to stimulate more strength gains at a point where you need it the most (think: sticking points).

Running down these three benefits of isometric training:

Looks easy, but because of the leverage point and the fact that your toes are pointed, it's a tough and effective hamstring builder.
Bodybuilding, Exercise Coaching, Legs, Tips
Mark Dugdale May 26

The dead zone is when injuries and frustrations mount. It can last a decade, but getting through it may be what gives you the biggest gains of your life. Here’s what to do.
Bench Press, Powerlifting & Strength, Training
Dave Tate December 3 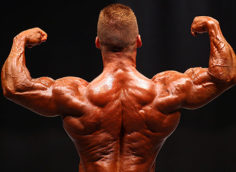 The back does way more than you think, and you're probably not challenging it optimally for growth. Add these exercises.
Training
Kevin Mullins July 31

Call it whatever you want: circuit training, interval training, whatever. Two things are certain: 1. It ain't for wimps. 2. It'll rip the fat off you.
Fat Loss Training, Metcon, Training
Chad Coy March 30