I'm known for being able to suffer major injuries and bounce back from them completely healed – and in record time.

As I write this, I'm nine weeks post surgery from a distal triceps tendon repair. While I still have a way to go to return to previous strength levels, my recovery is going well.

I underwent surgery on January 25th and 49 days later bench-pressed 225 lbs. for 20 reps. Although hardly an impressive feat of strength, it's not too shabby when you consider I wasn't even supposed to be out of a splint for eight weeks post surgery.

Anyhow, you can see how I've earned this notoriety.

None of us ever want to experience a serious lifting injury, but many will. The longer you stay in the sport and the stronger you become, the greater the odds that at some point you'll be faced with a serious injury. Due to my strength level and approach to training, I've suffered more muscle and tendon tears than just about any active competitor I know.

I've torn my left calf, right quad, left pec, left lat, my groin on both sides, my lower back numerous times, both biceps, right triceps once, and my left triceps three times including the most recent tear which required surgical repair of the tendon.

Three of the injuries resulted in me being wheeled into an operating room for surgical repair and many others required an extensive rehab. I've also separated my right acromio-clavicular joint, dislocated my right shoulder, and even pushed myself to the point where I caused intracranial bleeding – on two separate occasions.

Many would say I'm lucky to be alive and fully functional, let alone still competing. However, even with all of these injuries I continue to progress, and every year I'm bigger and stronger.

This article is about how I managed to overcome these setbacks and how you can do the same, should the lifting demons strike you down.

First, a disclaimer. I'm going to share with you what I've done and what's worked well for me. I'm NOT advising you to go against your doctor's advice.

For any soft tissue injury, the sooner you get up and moving (within reason) the better. If you're fresh out of surgery and your injured extremity is in a cast or splint, obviously you need to wait until your doctor removes it.

(You might have heard about how I once removed a cast 10 days after surgery. I do not recommend this. Keep in mind, it's no secret that I'm not quite right in the head, and have also been through this process numerous times and know my body extremely well.)

However, the majority of surgeons aren't used to dealing with athletes. The typical patient is often an elderly or sedentary couch potato and usually in very poor health. While the histology of the cells don't differ between an athlete and a sedentary person, the rehab process for a highly conditioned and highly motivated athlete is going to be markedly different.

The key is to listen to your body. If your body tells you no, then listen. Failure to do so will simply result in re-injury and having to repeat the whole process.

Step One – Get Moving

The sooner you can begin moving the injured area the better. This will increase blood flow and begin to strengthen areas that have atrophied due to lack of use. The increased blood flow will also bring new nutrients into the injured area to assist with repair and carry waste products away.

Initially your movement is going to be slow, controlled, and often through a limited range of motion. It's important to progress slowly but steadily and once a full range of motion has been reestablished, resistance can be added incrementally.

When I tore my right quad I initially had a great deal of difficulty even walking; I couldn't bend my leg more than a few degrees or support any weight. My first goal was to be able to bend my leg through a full range of motion. I didn't enter any type of organized rehab program so I was tasked with figuring things out on my own.

What I came up with was positioning myself in the corner of two counter tops. I'd face into the corner and support my body weight with my arms and then slowly lower myself as far as I could tolerate. Initially I only moved a few inches, but every day I increased the range of motion until I reached the point where I could lower myself into a full squatting position.

Now I was ready to start adding resistance. At first this was only my partial bodyweight; I'd assist myself with my arms by pushing or pulling on the counter tops. I did this daily until I could do them without assistance.

Next I focused on increasing the number of reps I could do per set, progressing into multiple sets and reps until I felt it was time to get back under the bar. This initial process took me only a few weeks, but your results will vary based on the severity of the injury, individual pain tolerance, rehab experience, and motivation.

When adding resistance, the key is to do so in a slow, controlled, but progressive fashion while always listening to your body. To minimize the risk of re-injury, it's crucial to recognize the signals your body is sending and knowing how to interpret them.

After training sessions you need to be able to differentiate between the pain of normal muscular soreness from that of doing too much too soon and risking re-injury. A strong mind/body connection is a necessity.

Resistance should be increased in small weekly increments until the point of being able to return to normal training is reached. For example, about a month after my quad tear in January of 2008, I was able to start squatting again with just an empty bar. This was followed by 135 lbs. for a few reps the next week, then 225 lbs. the week after, then and 315 lbs. etc.

After a few months I was able to return to and then surpass my former training weights. The entire time I was listening very carefully to my body, and had it told me that I needed to back off or slow my progress, I would've done so. Six months later in July of 2008, I squatted a PR of 1014 lbs. on route to winning the heavyweight division and overall at the UPA Pro Am.

Having been a 1000-pound squatter before my injury, I considered increasing my weights by 90 lbs. per week post-surgery to be moderate progression, and would be the equivalent to a 300-pound squatter increasing their training loads by 25 lbs. per week. So while it may look like I was making enormous jumps from week to week, the progress was quite moderate considering my strength level.

For some this isn't a challenge, but for many this is where the real war is waged if they're to return to and exceed their pre-injury strength and size. There have been many champions who've had their careers ended over night due to injury. Here's how to overcome the fear of injury and start breaking new ground as quickly as possible.

First, you must believe in your ability to recover fully. From the second you suffer the injury, you must see this as simply a bump in the road and a minor irritation, nothing more. Don't give the injury any more significance than it's due. This is simply another challenge to overcome on your way to achieving your goals.

If you have trouble seeing injuries this way, there are several strategies to help you achieve this mindset.

The first is rationalization. Invoke your inner Mr. Spock and look at injuries from a rational, logical point of view. Recognize that many athletes have overcome similar and often much more severe injuries than you and have returned to competition to exceed their pre-injury bests.

I know a powerlifter that crushed his thoracic vertebrae while squatting and another that needed metal rods inserted in his lumbar spine, and both came back to squat more than ever. Another powerlifter and strongman tore both of his patella tendons off and after being told by doctors that he'd be lucky to ever walk again, came back to squat over 1100 lbs.

I even know a wrestler that had to have one of his legs amputated due to cancer and he returned to compete at a higher level than he did before the surgery. Considering that, can you really look at whatever injury you may be facing and tell yourself that it's not possible to come back better than ever?

Returning to whatever it was that caused the injury can be daunting. I know more than one elite level powerlifter that got injured under a big squat and was never able to mentally conquer the fear of that happening again. Every time they tried, all they could think about was the injury and how it felt when it happened.

This is where visualization can be of great use. When returning to what caused the injury, being able to change what you see in your mind is key. You need to practice visualization until the images in your mind are as real as what you see with your eyes. Then you can move onto recreating your injury scenario, this time envisioning yourself conquering the event without injury.

Although this sounds easier than it really is, with enough practice and repetition it's very achievable. This is my go-to technique when trying to break plateaus and it can be effectively used to change your view of past events and conquer your fears.

Never let fear be your biggest enemy. Fear holds so many back from ever reaching their true potential and it can be a huge obstacle when dealing with injuries. You must train yourself to control your mind and realize that fear is self-created, and as such you have the power to destroy it.

Recognize that fear comes from within. That's why many can experience the same scenario and each have a different reaction to it. Anything that we generate we can also control.

For example, when I competed in my younger years I'd get very nervous and allow that nervousness to turn to fear. By the time it was time to compete, I was so scared I'd already lost.

Over time I learned how to control this nervous energy and turn it into focused aggression. In time this nervous energy went from being my biggest enemy to my strongest ally. Remember, anything internally generated is at our command. You only need to learn how to give the orders.

Despite suffering more than my share of injuries, I still don't take them lightly, nor do I suggest you do either. But I refuse to give them any power over me psychologically or get between my goals and me.

Here's what to do when suffering an injury:

Regarding the psychological aspect of injury rehabilitation:

Soft tissue injuries are a pain (pardon the pun), but they don't have to end your lifting career. Remember, injuries are just small bumps in the road on your way to achieving your goals.

Editor's note: To repeat Matt's disclaimer, he's just telling you what he's done and what worked well for him. He's NOT advising you to go against your doctor's advice. 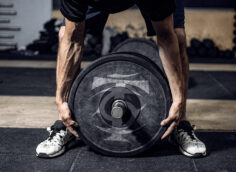 Get strong and bulletproof your body against injuries with these five neglected exercises. Check 'em out and add a few to your training plan.
Exercise Coaching, Powerlifting & Strength
Brandon Rynka February 6

The kneeling rest-pause chin-up builds explosiveness and helps you perfect your form on regular chin-ups. Here's how to do it.
Exercise Coaching, Tips
Mike Sheridan March 27