Starting this week, Christian Thibaudeau will share a new
exercise, a new twist on an exercise, or a new exercise routine
every Monday. So if you want to start the workout week with a fresh
idea, you know where to come.

There are literally dozens of quality exercises, strategies, and
programs to help build your biceps up. However, this new movement
is something that few, if any, people are actually using in their
training programs. And it's sad, really, because it's a very
effective weapon in your quest for big guns.

So, who's the new guy at the gym? It's the constant tension
alternate curl (and its variations).

This movement, which is a simple alternate curl with a twist, is
based on three physiological facts:

1. The three main ways to stimulate growth are:

3. Isometric action (contracting a muscle without any movement)
allows you to recruit up to 10% more muscle fibers than other types
of muscle actions. These fibers will also stay activated during a
subsequent dynamic phase.

The trouble is, few biceps exercises make use of all three
factors.

For example, the regular alternate dumbbell curl – in which you
start each rep with the arms fully extended (illustrated
below) – takes advantage of unilateral action but not of constant
tension because the muscle can relax when it's in the extended
position, waiting for its turn.

Furthermore, you don't get the benefit of preceding the dynamic
phase by an isometric action, either. 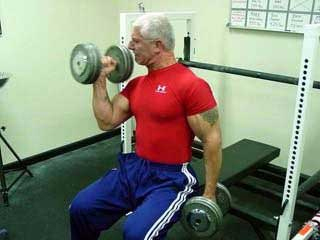 On the other hand, it's easier to maintain constant tension in
the biceps by curling with both arms at the same time (either using
dumbbells or a bar) and avoiding a pause at the bottom of each
repetition. However, it doesn't allow you to reap the benefits of
unilateral work.

(By the way, if you're using dumbbells, but are curling both
arms at the same time, it's not a unilateral movement.
Unilateral means that you're doing the dynamic portion of the
movement one limb at a time.)

So, the solution that allows you to take advantage of constant
tension, isometric potentiation, and unilateral-enhanced neural
drive is to perform the alternate curl starting from the top.

Basically, in the beginning position of all of the reps, both
arms are in the fully flexed position. You then lower (eccentric
phase) the working arm while keeping the non-working arm flexed.
Curl up the working arm until both arms are once again flexed. Then
switch arms and do the same thing.

You keep on alternating this way until the set is completed.

The benefits of this new biceps bombardment are:

1. The biceps are under constant tension; while the non-lifting
arm is "waiting its turn," it's still contracted
(isometrically).

2. You're performing a unilateral dynamic movement.

3. You're preceding the dynamic action by an isometric one.

The downside is that you can't use as much weight, thus you
won't create as much muscle damage. This is why it's important to
use this exercise as a secondary biceps movement, after a "regular"
and heavier exercise.

For some additional fiber-stimulating pain, you can use this
technique with any biceps exercise performed with dumbbells.

And anything else you can think of...

A chiseled midsection. A strong, functional core. Who says you can't train for both? Here’s how to do it.
Abs, Training
Mike Robertson February 3 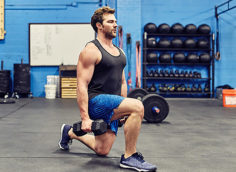 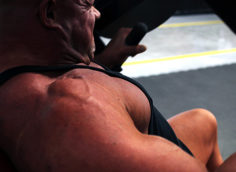 Sounds like blasphemy, but chasing numbers on the bar can sometimes wreck your gains. Here's why, plus four ways to fix the problem.
Bodybuilding, Training
Thoren Bradley September 20

Do these movements before your next workout! Not only will they loosen you up quickly and make you feel awesome, they'll enhance performance.
It Hurts Fix It, Mobility, Soft-Tissue Techniques, Training
Mike Sheridan May 16