Bands are UN-accommodating Resistance for Rows

When doing rows, the weight gets heavier as you row the weight towards you because you're losing a mechanical advantage over the weight. Well, resistance bands get "heavier" as you stretch them. This is why I don't recommend attaching bands to barbells, dumbbells, or to plate-loaded machines when doing rows.

Many trainers falsely believe that adding resistance bands to free weight and plate-loaded exercises creates "accommodating resistance." The resistance is only accommodating when the band getting heavier corresponds with you gaining a mechanical advantage over the load as you do the lift, such as what occurs when doing a free weight or machine chest press, deadlift, Romanian deadlift, squat, leg press, etc.

However, the opposite occurs when adding bands to rows, which creates UN-accommodating resistance. And, when the resistance curve is increasing as your strength curve is decreasing, it forces you to cheat. This is why we see lifters pull the weight halfway with good form and then jolt it the rest of the way when doing bent-over rows and one-arm dumbbell rows.

It's also why you see so many people turning their torso towards their rowing arm as they pull the dumbbell in on dumbbell rows, along with seeing people staying too upright on bent-over barbell rows and one-arm rows, or leaning back too far when doing seated rows or machine rows. The addition of bands simply magnifies these cheats.

That said, there are two instances where I might recommend using bands on rows: 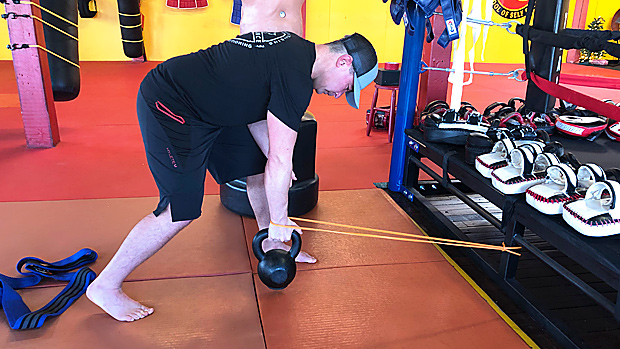 This is done to create more mechanical tension at the bottom of the dumbbell row where you'd normally allow your arms to just hang. The idea is to make you work through a greater range of motion. It's a great concept, but anchoring the band low and placing it around your wrist or the dumbbell creates two issues at the top of the row that are probably not what most lifters are after.

First, the top position of doing banded rows in this manner mimics that of the starting position of a low-cable triceps kickback, and all the band is going to do is either pull your elbow farther into flexion or increase the triceps demand to keep your elbow at 90-degrees.

The second issue is that the low anchor point of the band creates UN-accommodating resistance (as described above) to an exercise that already involves you losing a mechanical advantage as you pull the weight into you.

So I recommend performing banded dumbbell rows with 1) the band anchored directly above the shoulder of your rowing arm when you're in the bent-over position to begin the row, and 2) around the top of your forearm, just below your elbow. 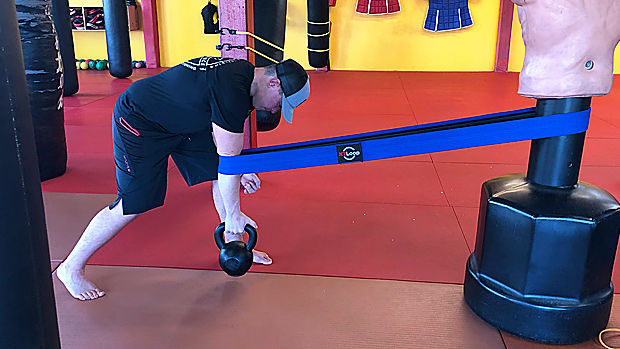 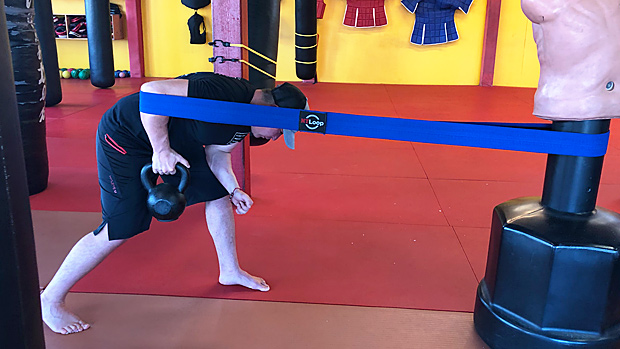 This setup still makes you do the extra work at the bottom position when your arm is hanging below your shoulders, but it doesn't create the two issues I mentioned because this setup gives you a mechanical advantage on the band as you get closer to the top position.

Note that I'm using an NT Loop, www.ntloop.com, instead of a traditional latex band because I designed them to be a far more comfortable and stable band to place around your limbs, waist, or hips.

No, not three dumbbells, dummy, but an overhead press performed with three different techniques without rest. Check it out.
Bodybuilding, Shoulders, Tips, Training
Tom Morrison March 20

Here's a challenging new way to do dips that'll help you move like a gymnast.
Tips, Training
Mike Sheridan January 23