Full vs. Effective Range of Motion

Take the lateral dumbbell raise. Full range of motion would involve bringing the weights all the way up so that the back of your hands almost touch above your head. No one does that because they instinctively know that the lateral or "middle" head of the delts wouldn't be optimally stimulated, and that's what you're trying to target with dumbbell lateral raises.

Problem is, many lifters are still going up too high. Instead, try bringing the weights up so that the hands are slightly beneath the height of the shoulder. This is the effective range of motion.

The deltoids are still stimulated, but the scapula isn't being subjected to an additional range of motion that leads to more activation of the upper trapezius. As a bonus, it also limits the chance of rubbing down the supraspinatus tendon between the humerus and acromion process. This helps limit impingement. 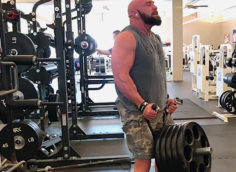