At some point you, or someone very close to you, is going to get hurt. I'm not talking about a paper cut or a skinned knee – I'm talking about a serious injury that requires a doctor's care and a (hopefully temporary) lifestyle modification.

Hardcore muscleheads have been known to push their bodies to ridiculous limits in the gym, and while serious injuries have occurred in the weight room, they're remarkably rare. Fact is, far more injuries occur on the field of play than under the bar, and often more serious, even career or life-threatening.

Yet despite such an impressive safety record, weight room injuries do occur, so you need to be prepared.

First, there are two major types of injuries the body experiences, macrotraumas and microtraumas.

Macrotraumas are sudden, acute injuries; you'll know the instant they occur. On the court it's when a point guard comes down with a rebound and snaps his ankle. In our world, it's when you're hammering up 315 like it's styrofoam and something in your pecs pops so loud you can hear it over the Lady Gaga playing on the sound system.

A microtrauma is a chronic overuse injury. Although less dramatic from an athlete's point of view, microtraumas can be just as annoying as they're often difficult to properly assess and manage.

Examples of microtraumas include stress fractures and tendonitis (some prefer the term tendinosis), with tennis elbow and golfer's elbow being common afflictions.

It's very common for these injuries to linger, sometimes for months, and rest doesn't automatically heal them, adding to the frustration. Nothing's worse than taking a month off from lifting to let an injury heal and upon returning realizing that, a) you're now weak as shit and, b) you still have the injury to deal with. It's enough to make some give up on training altogether! 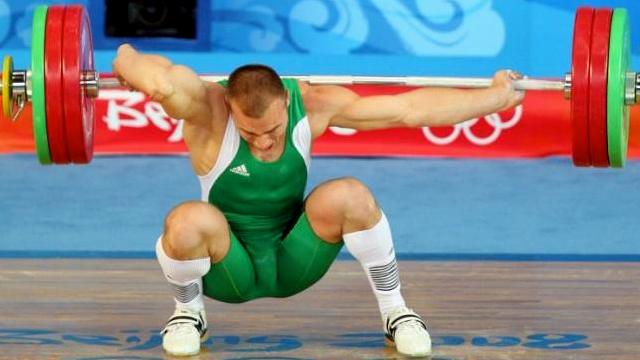 How The Body Responds to Injury

The body goes through a three-phase response to any serious injury, be it a macrotrauma or a bad microtrauma. You can't skip steps – you must complete one phase before moving on to the next, no matter how badly you want to rush it.

The first phase is the inflammation phase. This happens immediately (within minutes) of a serious injury and can last from several days to a couple of weeks for more serious injuries. During this phase the injured area swells up; it will likely be red, hot, may throb, and it will hurt even if the area isn't moved.

You can train unaffected areas if it doesn't bother the injured area, but the training goal for the injured area is simple: don't make the injury worse. That means leave it the hell alone! Don't train it lightly, don't stretch it (unless instructed by a doctor), and don't go for a light jog instead of a hard run. Just leave it alone.

You can also RICE the injured area. RICE stands for Rest (leave it alone), Ice (ice for 15-20 minutes an hour, as often as possible), Compression (wrap it up loosely), and Elevation (put it above the heart if possible when at rest).

To summarize, perform no training for the injured area. This sucks, but this phase only lasts about two weeks.

Once the inflammation has subsided (the swelling reduced and the pain at rest diminished), the body enters the second phase of injury, the repair phase.

Think of an injured animal – it can only lie hurt in a cave for so long. If the animal survives the first phase it will need to move to find water, food, and defend itself from any lurking honey badgers. Although we don't live in caves anymore and medical attention is readily available in most nonpartisan countries, we're still operating on the same biological software as our ancestors. Your body wants to get you up and moving, but just at basic levels.

This is extremely important for the lifter to remember. The body is attempting to return to basic functioning during this phase, nothing more. But problems occur when the lifter starts to feel better and, eager to return to their previous activities, tries to push it or "test it." All too often the result is the area gets re-injured and the entire process must start all over again.

During this phase, the training goal is to prevent atrophy (muscle loss) of the injured area. The good news is that this is much easier to accomplish than creating hypertrophy (building muscle), as basic stimulation will prevent atrophy.

Training guidelines for this phase including focusing on a pain-free range of motion, even if it's limited in the beginning. Isometrics are a useful tool; one can start in a pain-free ROM and then gradually increase it over time.

Slow speed, light-weight resistance training can be used as well, with 10-20 reps being the norm; be sure to err on the side of light weight and high reps in this phase. Open chained and isolation movements are preferred for introducing load to the injured area.

Lifters should also focus on stretching to get back any flexibility that was lost from the injury, with the goal of a return to a normal level of flexibility if possible. The lifter might also start to work on stability in a controlled setting near the end of this phase. Heavy weights should definitely be avoided (stay with <50% 1RM), along with any high speed, high power, or explosive movements.

Typically the repair phase lasts about two months from the end of the inflammation phase for most reasonably serious injuries. The lifter can and should work on other areas of the body or components of fitness not limited by the injury. 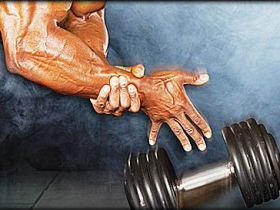 The final phase in injury is the remodeling phase, which usually lasts 2-4 months from the end of the repair phase. Since death has been successfully averted, the body wants to get back to the way shit was, yo. But the body is also smarter than you and a hell of a lot more patient. It takes its sweet time in the healing process because it's trying to do things right.

Collagen fibers are laid down now in an organized fashion and strength and stability should return over time to the injured area. By the beginning, or certainly the middle of this phase, most ROM should've returned to the injured area, which is important to monitor as continued limitations in ROM might become permanent if not addressed during this phase.

The training goal for this phase is a "return to previous level and beyond." As the body begins to get stronger, heavier weights (>50% 1RM) can be used, although do NOT rush into them.

Furthermore, a lifter must realize after being hurt, followed by several months of low intensity activity, that their 1RM is not what it once was. The safest bet is to return to the weights at the end of the repair phase but follow a linear progression of slowly increasing the weights by 5 or 10 lbs. a week for as long as possible.

The lifter can and should continue to work on other areas of the body and other components of fitness. I wrote an article that works well in the beginning or middle phases of the remodeling phase.

Getting injured sucks the big one, but all is not lost. Once the injury has been properly diagnosed and treated, sit down with your doctor and set a realistic time line for when you think you will be better.

Then, be conservative. Work slowly toward that timeline and be patient, as most big injuries take at least six months to return to near normal. Do some research and find out what other people are going through. You're not alone and others have likely suffered far worse than what you're going through.

You could even use this time as a gift, although it won't feel like a gift when you're mired in the middle of it. See it as a chance to return to the basics, like mastering your form on the big exercises you can safely perform. Read more, work on your weak points, and build all the components of fitness.

Maybe you won't be able to improve your bench for three months while your shoulder heals from surgery, but you can work on your core or your legs or your cardio or your balance, or whatever else you care about and/or maybe suck at.

I dislocated my shoulder my senior year of high school playing football and while it sucked to sit out my senior year, I used that time to learn more about fitness and how the body works. That was one of the first steps that led me to a career in fitness, which I'm happy to have today.

Many have gone on to achieve extremely high levels of performance after an injury – seek those people out and believe you can do it, too. YouTube, books, magazine articles, and the Internet are full of inspiring stories about the adversity that people have overcome. While it doesn't always happen, your body may just surprise you.

Bottom line is, life will be good again. Use the mental toughness and determination that lifting has developed in you and apply that to your injury. Remain positive; remember those that helped you out, and you may just come out on the other side stronger and healthier than ever before.

Do this on the your next off day to move better and feel better. Take a look.
It Hurts Fix It, Tips, Training
Dr John Rusin September 30

Sure, free weights are generally better, but not for everything. Even CrossFitters can benefit from them. Here's how.
CrossFit, Tips, Training
Jason Brown October 29

Here's how to take the standard dumbbell row and make it work even better.
Exercise Coaching, Tips
Christian Thibaudeau February 9 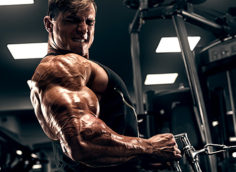 Guess what? The best form for cable and barbell rows isn't super strict, no matter what the Form Police say. Here's why.
Training
Lee Boyce November 21