You Probably Suck at Push-Ups

If someone says he can do 40 or fewer push-ups in a row, he typically can't complete one PERFECT push-up. And if an athlete says he can do 80 push-ups, his true number is closer to 20.

Don't believe it? Use the proper form outlined below and see how many reps you get. Also, try pausing 1 second at the top and 1 second at the bottom to eliminate momentum and risk of cheating. Even if you decide not to pause, you'll be surprised by your actual number once you use the correct mechanics.

Push-Ups Are Not for Beginners

Contrary to popular opinion, the push-up isn't a newbie exercise. It's much more advanced and challenging than most people think. Why? Because few people understand what a proper push-up is.

Most folks, including beginners, can perform a ton of faulty push-ups. But when performed the right way, even the fittest individuals can struggle. The exercise requires significant strength, function, stability, core stabilization, postural control, proprioception, and kinesthetic awareness.

A correct push-up requires you to press 65-70% of your total weight while simultaneously coordinating intense motor unit recruitment from head to toe. Few coaches would take beginners and have them use free weights loaded with these same numbers. It would be nearly impossible to teach proper form.

Using push-ups as a beginner-level exercise for "building a foundation" represents faulty programming. It only highlights the level of incompetence of the trainer – he or she likely has no idea how to perform a correct push-up. So let's debunk the most common training misnomers as well as analyze which cues are essential for performing push-ups correctly.

It's important to understand that the push-up isn't a linear movement, but instead rotational. There's an axis of rotation or single pivot point that your body rotates around – your feet. As a result, the body should move as one unit in a small semi-circular fashion rather than a perfectly linear straight up-and-down motion.

How to Do a Real Push-Up

Should the Body be in a Straight Line?

It's commonly accepted that the body needs to form a relatively straight line during the push-up. While this is correct, most trainers mistakenly use the top of the glutes as a point of alignment to connect with the ankles, knees, and shoulders.

This is a faulty way to assess form. The top of the glutes don't represent a joint origin, but instead the location of a muscle. There should be five key points of joint alignment: ankles, knees, hips (not the top of the butt), shoulders, and head. If the hips remain in alignment with the ankles, knees, shoulders and head, the glutes themselves will actually appear slightly above the rest of the body.

Natural Curvature of the Spine

There should be a natural curvature of the spine, particularly in the lumbar region. Many people use an overly-flat back position that places the hips below the other joint segments.

Similar to proper standing posture, the human spine should exhibit a natural curvature in the lumbar spine indicative of optimal spinal alignment. If you were to take a snapshot of a proper push-up, postural alignment should so closely resemble ideal standing posture that you should be able to flip the image over 90 degrees with little visible distinction from standing postural mechanics. 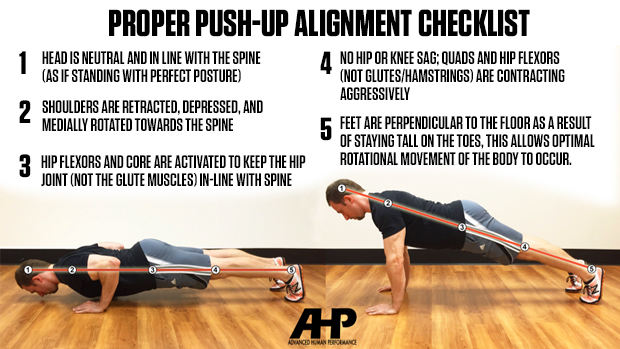 To eliminate the possibilities of excessive anterior pelvic tilt and extreme lordotic curvature, pull the stomach in while keeping the hips tall rather than allowing the stomach to hang below the body. Think elongated spinal alignment rather than compressed spinal positioning.

The Worse Cue: Squeeze Your Glutes

Many coaches use the "squeeze your glutes" cue to eliminate what they consider to be cheating. Although contracting the glutes is fine during certain exercises, people have become obsessed with this trendy catchphrase. The thing is, it's wrong!

A Better Cue: Contract Your Quads

A better form of activation is to squeeze the quads and fire the hip flexors while hollowing the core. This activation pattern directly resists extension forces of the spine and hips while optimizing core activation. The hip flexors and the core work together to stabilize the spine, particularly when in a plank position.

Contracting the quads also helps to resist knee flexion as gravity is acting on the knee joints and trying to flex them during a push-up. Also, the quads and hip flexors work in unison during a plank position, particularly the rectus femoris. The harder the quads contract, the greater the innervation to the hip flexors, ultimately providing the most efficient means to handle anti-extension forces. This is really useful during intense variations of weighted push-ups and planks.

Hips: Too High vs. Too Low

When it comes to hip positioning, it's better to be too high than too low. Too high simply indicates over-activation of the muscles that resist extension forces. In reality, this places you into a more difficult push-up position, not an easier one. It may not be an ideal position, but at least it's not dangerous.

In contrast, low or sagging hips (the most common problem) indicates lack of innervation to the right musculature, placing greater strain on the spine. This precipitates a lazy push-up position with an overly shortened range of motion that's very easy to cheat through, allowing people to crank out dozens of ugly reps. So if in doubt, keeps the hips higher.

Don't Pack Your Head and Chin

"Make a double chin" is a common cue. But this can create a shortened and compressed cervical spine, which further leads to degradations in postural alignment, shoulder function, and neural signaling. Instead, the head and neck should be neutral, tall, and elongated on the spine.

The flared elbow position (arms at 70 to 90 degrees from the torso) can produce both acute and chronic injury to the joints and tissues. Fortunately, many coaches now recommend the 45-degree arm angle, but this is still incorrect! 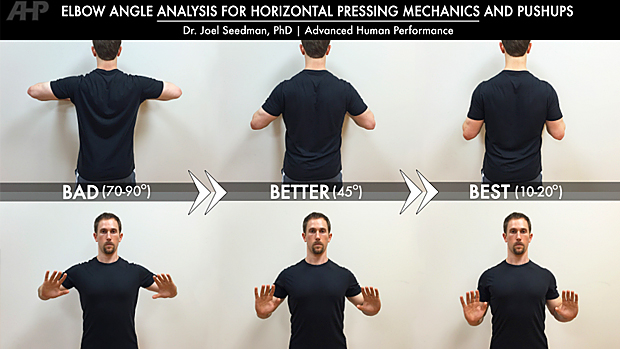 Although 45 degrees represents an improvement compared to extreme-elbow flare, it's not ideal. The shoulders and scapula still have additional room to move into a more centrated and packed position. When the scapulae fully retract, depress, and medially rotate towards the spine as they should, the arm and elbow position will be much closer to the torso – a 10 to 20 degree angle.

Proper elbow and shoulder position are directly related: one affects the other. Retracting and depressing the shoulders while having the scapulae medially rotate towards the spine will produce a "big chest" or "chest out" position.

Keeping the chest out helps to ensure proper scapulohumeral rhythm, shoulder joint centration, and ideal osteokinematics of the glenohumeral joint. Lack of "big chest" positioning tends to promote the opposite by pulling the shoulders out of their ideal alignment.

Foot positioning during a push-up is often overlooked, but it's one of the most important facets that determines whether or not your technique will be spot on.

First, you need to be as tall as possible on your toes. The balls of the feet really won't be in contact with the floor. The majority of the weight will be on the tips and base of the toes. This helps to produce the "hollowed core position" that you want.

Once you begin the push-up motion, the feet should appear almost perfectly perpendicular to the floor, and the ankle and toes should be stacked on top of one another. Experiment with foot positioning. These micro-adjustments can be used before and after reps, as well as during any rep as a means of ensuring your body retains its ideal orientation in relation to each joint segment.

The fingers should be pointed straight ahead. This promotes better centration of the glenohumeral joint by packing the scapulae down and back rather than up and forward. This also reinforces the desired elbow tuck and necessary lat recruitment. The hands play a similar role during push-ups as the feet do during squats. Rather than having the hands plastered flat to the floor, "cup" the floor with your hands and fingers.

Depth and Range of Motion

A good push-up involves a motion where the body finishes millimeters above the floor. This is obviously more challenging, but it produces significant gains in functional hypertrophy because you're actually stimulating strength gains rather than simply cheating your way through the exercise.

Because of the rotational movement, you'll be leading with the upper chest and head, not the lower chest, ab area, or hips. So, if there's any portion of the body that will touch the floor, it'll be the upper most extremities and nowhere else. However, with proper technique, you actually won't quite touch the floor. The locked-in osteokinematics produce a highly stable joint structure, making it almost impossible to go excessively deep and reach the ground. 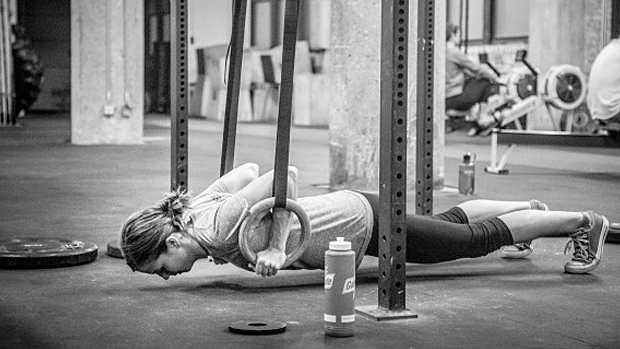 Test Yourself With Rings

Test how many push-ups you can do on rings and compare it to normal push-ups. Your ring push-ups should match at least 80% of what you get with standard push-ups. Inability to do so signifies issues in form and function, suggesting that faulty mechanics are being used on standard push-ups. That's the beauty of rings – they punish lousy form and reward proper form.

Yes, just one set. One excruciating set that'll make your eyeballs pop out. Here's how to do it.
Tips, Training
Christian Thibaudeau June 29 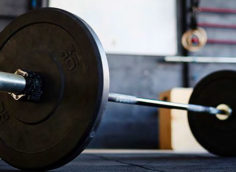 If you can nail one good rep of this full-body exercise, you're pretty awesome. Here's how to do it.
Abs, Tips, Training
Calvin Huynh February 18