Early on in anyone's personal training career, the term, "Functional Bodybuilding," might have sounded like an oxymoron.

But, as we've become more educated and much more experienced, we've come to find that the term functional bodybuilding makes more sense (to us) than many of the training trends we see in the fitness field.

In this article I'm going to tell you why athletes don't need to fear bodybuilding concepts; how adding to one's structural hypertrophy (through bodybuilding) can be very functional for athletes.

I'll also provide a sample hybrid-training program showing you how we integrate bodybuilding along with other proven training methods to improve your muscle and your hustle!

We can't talk about how bodybuilding can be functional for athletes without first defining what "functional training" is.

Put simply, if the exercise transfers positively into the target sport, activity or physique goal you're training for, it's functional!

Now some exercises have an obvious and direct functional transfer while other exercises offer a less obvious, indirect transfer. As I mentioned in my Truth About the Bench Press article, at Performance U we classify our exercises as either Specific or General based on how they (functionally) transfer.

According to Dr. Everett Harman in the reference book for the NSCA, "Essentials of Strength & Conditioning": "The concept of specificity, widely recognized in the field of resistance training, holds that training is most effective when resistance exercises are similar to the sport activity in which improvement is sought (the target activity).

"The simplest and most straightforward way to implement the principle of specificity is to select exercise similar to the target activity with regard to the joints about which movement occur and the direction of the movements. In addition, joints ranges of motion in the training should be at least as great as those in the target activity."

Essentially, the adaptations to training will be specific to the demands the training puts on the body. Now, don't get it twisted as this does NOT mean we work on skills with our specific (functional) exercise applications. What it means is that we work on improving specific force generation patterns, which transfer into target movements!

Since these applications don't necessarily reflect any specific force generation patterns, their ability to positively transfer into improved performance potential is less obvious and often ignored or misunderstood, which is what we'll clarify in this article, beginning with the list below.

Since it's already well established that getting stronger can help performance, here's a list of three ways we've found that also getting bigger using bodybuilding concepts has improved the performance of the athletes we've trained at Performance U.

Note: We don't attempt to make our weight-class athletes, like MMA fighters, bigger because it may interfere with them making weight unless they're bumping up a weight-class or in the super-heavy weight division.

1. Muscle (Weight) Gain Makes You Stronger From Your Feet

Unless you're a racecar driver, being strong from the standing position is crucial in sports. And, research on a kinetic and electromyographic comparison of the standing cable press and bench press showed that when standing, horizontal pushing forces are limited to around 40.8% of your bodyweight (1), rather than your bench press.

In other words, the heavier you are, the more horizontal and diagonal pushing force you can produce from the standing position (regardless of your weight room numbers) because you have more mass (into the ground) to push from.

This isn't to say that getting a stronger bench press doesn't help standing pushing performance. What these results tell us is that also getting bigger (gaining weight) can help us to better use our strength by giving us a greater platform to push on our opposition as well as give us a better chance to avoid getting knocked over or off-balance.

So, putting on 20 pounds of muscle mass – we rarely want to gain weight from extra body fat – through hypertrophy training (i.e., bodybuilding) can give athletes like football, basketball and rugby players more pushing force production ability (strength) from their feet.

Piggy-backing off of what we just covered, according to my man Eric Cressey, "Increased body weight is associated with increased pitching velocity." And, since throwing & striking are similar total-body actions, both of which summate forces from the ground up, thiscorrelates with what we've seen over the years training fighters.

Bigger dudes simply tend to punch harder (technical ability being equal) because they've simply got "more ass" (a bigger body) behind their punches and they've got a greater platform (more weight into the ground) from which to generate force.

If you're an athlete who's worried about gaining too much muscle, Cressey has something for you to think about:

"While a gain of ten pounds seems like a huge deal to most athletes, the truth is that it's actually a trivial amount of muscle mass over an entire body. Have a look at this picture of 5 pounds of muscle vs. 5 pounds of fat.

"Now, imagine spreading two of the red masses on the right over the course of an entire body; you would barely notice they're there, especially if you're tall."

Wise (not so old) Eric does warn us that if we're able to hit and throw harder, we'll also be more predisposed to injuries. But, that's no different than if we run faster, we'll be more likely to pull a hamstring; orif we drive our car faster, we're more likely to crash.

Physics tells us that a larger surface area (i.e., bigger muscles) dissipates impact force and vibration (caused by falling, getting punched, a football hit, etc.) better than a smaller surface area of the same stiffness.

In other words, to better dissipate force is to spread it out over a greater area, so that no one spot has to bear the brunt of the concentrated force. An arch bridge is a good example of something designed for effective force dissipation.

With this in mind, when using bodybuilding concepts with our athletes, we tell them that our hypertrophy training is about building their body's real physiological under-armor!

Plus, a larger muscle not only helps to dissipate external impact forces, it also sets the stage for increased force production (by upgrading your hardware), provided your CNS (your software) can provide the neural charge to maximize it!

Many trainers and coaches often claim they don't use bodybuilding concepts because they don't want their athletes to become like bodybuilders. We feel this view lacks common sense because anyone in their right mind knows damn well that doing some biceps curls and leg extensions won't turn you into Ronnie Coleman anymore than running hill sprints and wearing 80's sweat bands will turn you into Walter Payton!

Common sense aside, we feel it's unjustified to think that incorporating some bodybuilding will cause you to lose movement and athletic ability for the following reasons:

The sports strength coach might call squats "knee dominant training," while the bodybuilding enthusiast may call it "leg or quad training," and the powerlifter might label squats as a "primary lift," but it's all really the same damn thing – a squat!

It just goes to show that although we may label exercises differently, there are way more similarities than differences in the foundational exercises (i.e., movements) used in all forms of weight training.

True "functional movement" training doesn't come from exercises, it comes from playing and practicing sports. That said, we've never understood why so many trainers and coaches freak out when they hear about athletes incorporating bodybuilding concepts into their training.

They can't possibly think the CNS is so fragile that a few sets of isolation exercises or a few sets on weight machines per each week will somehow offset the functional abilities and movement skills acquired from hours and hours of sports practice and competition that athletes rack up each week.

Not only are our athletes involved in regular sports practice and competition, we also incorporate strength, power, agility and conditioning, along with bodybuilding, to help our athletes get stronger, faster and into great shape along with getting bigger. That's what we call "Hybrid Training," baby!

One of the first publicized examples of how bodybuilding was successfully integrated into a hybrid sports performance-training program was in 90's when Evander Holyfield was preparing to fight Buster Douglas and then Mike Tyson.

Holyfield did boxing practice in the morning, plyos and conditioning in the afternoon with Dr. Fred Hatfield, and did bodybuilding and strength training with multiple Mr. Olympia bodybuilding champion Lee Haney in the evening.

After the 12-week cycle, Evander recovered quickly from intense activity, his agility and limit strength levels increased, and he gained 10 pounds of muscle, going from 208 to 218 pounds.

Here's a sample 3-day workout plan we've used with some of our elite & recreational athletes, which helped them to gain speed, strength & size!

Note: If working with a competitive athlete, a program like this would be used in their off-season. Their pre-season program would emphasize more conditioning and power-endurance, which is beyond the scope of this article.

Rest as little as needed between exercise/sets to successfully achieve the reps indicated.

Note: We usually adjust the days according to the athlete's sports practice or athletic activity schedule. If the athlete takes weekends off, we'll do lower-body day on Friday to allow the legs to rest during the week.

As you can see our philosophy is to "train movements AND muscles" because muscles provide control and protection. Additionally, the CNS coordinates the muscles to create smooth efficient movements.

We only help athletes to gain hypertrophy when they wish to get bigger. If an athlete is already as big as they want to be or as big as they're comfortable with, we'll avoid bodybuilding-style training so as to not add more hypertrophy to someone who doesn't want it.

Finally, the main goal of the program above is to be able to perform the movement drills better (faster, smoother, with less fatigue, etc.) each time around, and to keep lifting heavier on each of the three strength exercises.

Rarely have we found gains in hypertrophy to make athletes slower or less explosive. If in the rare case we do find that size gains hinder speed or strength, we'll simply back off the hypertrophy training until things normalize and adjust future training programs accordingly.

Here are 7 ways to build heroic pecs without making your shoulders beg for mercy.
Shoulders, Training
Ben Bruno May 3

How to lose the flab while maintaining all your hard-earned muscle and strength.
Fat Loss Training, Training
Nick Tumminello November 23 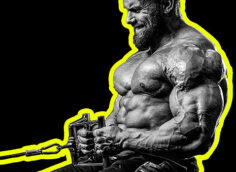 Stuck in a rut? Dig yourself out with a specialization plan. Here's how to do it with any goal.
Christian Thibaudeau July 26
Ian King is back with another of his legendary 12-week programs, this one an arm-specialization routine designed help you build a hefty pair of .44 magnums that even Dirty Harry would envy.
Training
Ian King June 2