What if there was one shared trait connecting a bunch of top tier, well-built, well-known bodybuilders? It's something that a number of Mr. America and Mr. Universe winners, and not one or two but six Mr. Olympias all have in common. Now, what if that same thing is something most lifters today avoid because it's "too hard to learn" or they think it's just not important or relevant anymore?

It's the classic Olympic lifts – the snatch, the clean and jerk, and the clean and press – and like it or not, they were an essential part of bodybuilding's early days and had a solid 40+ year run as a staple in most serious training plans. It's time for today's lifters to connect with their roots and really understand how to use the O-lifts to add size and strength.

The earliest forms of today's pro-bodybuilding contests actually trace back to the late-1930s when, then considered "amateur" events, competitions like Mr. America began. At the time, bodybuilding contests were often attached to Olympic weightlifting competitions, usually with the lifting first and the bodybuilders taking the stage shortly after. With some behind the scenes drama and sports politics, event organizers like Bob Hoffman (owner of York Barbell and founder of Strength and Health and Muscular Development magazines) played a large role in molding early contests, going as far as to require judges to factor "athletic points" into the final bodybuilding score.

Those athletic points were generally earned by performing the Olympic lifts (then the snatch, clean and jerk, and clean and press) and they could account for up to 25% of the final score, often in addition to muscularity, symmetry, and general appearance. Because of the broad scoring system, it was commonplace for "bodybuilders" to regularly train the O-lifts, knowing those points could easily decide a show's winner.

As the Weiders and the IFBB gained momentum, beginning in the late-1940s and dominating by the early-'70s, they began organizing standalone bodybuilding shows without any connection to weightlifting and judged solely on the competitor's physique. This encouraged more and more "pure" bodybuilders who trained primarily for size and symmetry without needing to give extra attention to improving strength or technique on specific lifts.

However, in those several decades between, plenty of physiques were built that are still being talked about and considered admirable. Generally, these "best of both worlds" lifters either built their competitive and muscular foundation with Olympic lifting and later transitioned to strict bodybuilding, or they competed in the Olympic lifts and bodybuilding concurrently and often did well in both sports.

The list of Olympic lifting-bodybuilders is a catalog of guys whose pictures are probably on your gym wall. They're the kind of solid, powerful, well-developed builds that continue to inspire, even though today's lifters may, sadly, only recognize a handful of names.

Member of the 1936 US Olympic weightlifting team. Two-time Mr. America (1940, '41), 1948 Mr. Universe. One of the most photographed and inspiring bodybuilders of his day.

Competed in weightlifting on an international level, including 2nd place at the 1938 World Championships. First lifter to break the 1,000-pound total (all three lifts combined), in 1941. 1944 Mr. America. Won the first Mr. Universe contest in 1947.

Competed and placed in several national weightlifting contests in the '40s and '50s, including an unofficial world record 405-pound clean and jerk while weighing around 180 pounds. 1951 Mr. America.

Began weightlifting in the late-1950s, competed on an international level until the early-'60s before getting into bodybuilding. Twice won the "Most Muscular" award at Mr. America without winning the overall title (1965, '66). 1967 Mr. Universe. Three-time Mr. Olympia (1967-69).

Pick your jaws up off the floor. Arnold's intro to training began with Olympic weightlifting as a teen. Competed in and won national Olympic lifting meets in the early and mid-'60s, while also competing in local bodybuilding contests. Also competed in powerlifting in the late-'60s before becoming "just" a bodybuilder. Best lifts include a 264-pound press, 243-pound snatch, and 298-pound clean and jerk. Four-time Mr. Universe (1967-'70), seven-time Mr. Olympia (1970-'75, 1980).

T-Nation's own Sapir got into Olympic weightlifting after competing in national-level track and field. Two-time national weightlifting champ in Israel, competed internationally and qualified for the 2004 Olympics before turning to powerlifting and bodybuilding. Best lifts include a 310-pound snatch and a 400-pound clean and split jerk while weighing around 150 pounds. Transitioned to bodybuilding in the mid-2000s, including steadily-advancing placement while frequently breaking into the top 5.

Sapir explains his training background, "Until I was 22, I never did any exercise besides the Olympic lifts and variations of squats and deadlifts. I didn't even bench press until after I was done Olympic lifting because it would interfere with my flexibility and I never even trained my arms until I was 30!" 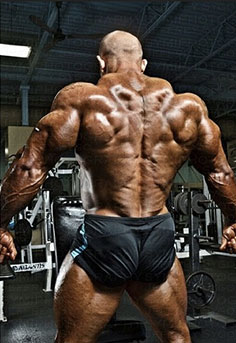 Tell the average guy in the gym to try a clean or snatch, and the most common response is, "I could never learn that without a coach, it's just too complicated. I'd probably snap in half." Sorry, buster, but that's wrong on a few different levels. Yes, Olympic lifting is a sport unto itself and competitive lifters spend hundreds of hours under supervised eyes to fine-tune their technique. But powerlifters do the same thing with squats, deadlifts, and benching. You don't see Average Joe avoiding those exercises because they're "too hard to learn". Okay, maybe you do see some guys avoiding the big, productive exercises because they mistakenly think they're too hard/complicated/dangerous, but that eagerness for easy just makes them a target to be mocked and clued in to a better way.

All exercises come with a learning curve, whether we're talking front squats, preacher curls, or power cleans. A lifter only needs to invest a bit of time, relative to their experience and condition, into gradually progressing on the given lift. With online reference materials such as videos and articles from competent coaches, there's zero reason why a clean or snatch needs to be significantly more daunting than any other big exercise. Just like you wouldn't try learning to squat with 225 on the bar, you wouldn't learn to clean starting with 135, but you do still learn by starting somewhere.

With any new lift, take the time to learn and practice the technique, and increase the load and volume over time. Lift too heavy too soon, or with too poor form, and you're bound for trouble. That's true whether you're doing a snatch, a leg press, or an overhead extension.

Sapir says, "Bodybuilders can learn a lot from the Olympic lifts. Squat and deadlift technique, explosive power, how to recruit their CNS and fast twitch fibers, coordination, and flexibility. The best way to build overall thickness is deadlifts, squats, and variations of snatches, jerks, and split jerks. You can build about 70% of a great physique with just the basic movements."

If you're using a body part split, clean and snatch variations lend themselves best to being the first exercise performed on back, shoulder, or leg days. The details will vary depending on your particular goal, but it's hard to go wrong learning with low volume. Introducing the lifts with 3-5 sets of 1-3 reps allows a small handful of quality reps each session, so technique rather than weight can be the priority.

Wil Fleming, Charles Staley, Christian Thibaudeau, Jon-Erik Kawamoto, Allen Hedrick, Lee Boyce, and other great coaches have written tons of articles breaking down the clean and/or snatch into learnable nuggets so you can incorporate the exercises into your training. Find any of the articles where those coaches have explained the Olympic lifts, read, learn, practice, and find a way to get them into your program.

A new way to plan your workouts that will break you out of a rut and keep you focused. Check it out.
Tips, Training
Travis Pollen June 4

Q & A with one of the world's premier strength coaches.
Bodybuilding, Powerlifting & Strength, Question of Strength, Training
Charles Poliquin April 21