For years, boxers, wrestlers, and football players have understood the importance of having a strong neck to tolerate the high-impact nature of their sports. You don't want to be coldcocked by Floyd Mayweather Jr. or run into the ground by Shawne Merriman only to find your head and body on two different stretchers.

However, aside from the above sports, I haven't heard of many people practicing regular neck strengthening routines. They just don't get it.

There are three very important reasons to make neck training a priority in any training program.

I'm going to make this one real simple.

Your brain controls your entire body. In order for your brain to communicate with your body, it must go through your neck. If something isn't right at the neck, it can affect everything your brain is trying to tell your body to do (or not do).

In other words, your neck is an essential crossroad to your body!

Also, keep in mind that strength is greatly dependant on the central nervous system (CNS) and neural recruitment. It only makes sense that having a strong, functional neck can improve your strength and power output.

The incidence of neck pain has been steadily increasing over the past two decades and is now second to back pain, the most common musculoskeletal disorder. Women are more likely than men to suffer from persistent neck pain, in particular those who spend a lot of time in front of a computer.

This is a key reason to emphasize neck strength in all athletes. In doing so, there are accelerated improvements in posture and torso stability, reductions in neck pain, and most importantly, zero neck injuries.

On the science side of things, research studies have shown conflicting results as to whether or not exercise can effectively treat neck pain. However, I've yet to find enough high-quality research to support that it doesn't.

I did locate a new study on women with neck pain that was published in the January issue of Arthritis Care & Research that found:

Here's another study that had similar findings:

"The National Research Centre for the Working Environment in Copenhagen, Denmark, researchers conducted a randomized controlled trial for which they recruited 94 women from seven workplaces in Copenhagen between September 2005 and March 2006. The work tasks performed by the women consisted of assembly line work and office work, with 79 percent of the participants using a keyboard for more than three-quarters of their working time.

"Participants first answered a questionnaire about their pain and then underwent a clinical exam to confirm a diagnosis of trapezius myalgia (muscle pain in the trapezius muscle, which extends along the back of the neck). Participants were assigned to three intervention groups: those who did supervised specific strength training (SST) exercises for the neck and shoulder muscles, those who did high-intensity general fitness training (GFT) on a bicycle ergometer, and a control group that received health counseling but no physical training. Both exercise groups worked out for 20 minutes three times a week for 10 weeks.

The authors then concluded with an important statement:

"Thus specific strength training locally of the neck and shoulder muscles is the most beneficial treatment in women with chronic neck muscle pain."

This is interesting because it basically reinforced something that I discovered years ago through trial and error. I found that in order to make significant improvements in neck strength and performance, we must utilize some specific neck strengthening protocols (like the ones shown here).

You'll never see anyone with perfect alignment at their pelvis, lumbar, and thoracic spine who has bad alignment at the neck. Like the tooth fairy, it just doesn't exist.

Sometimes coaches get so caught up with the position of the pelvis and lumbar spine that they virtually ignore the neck position in movements like the plank, birddog, and deadlift.

As Paul Chek says, "Your coreis what would be left if you had no extremities (arms and legs)." This further reinforces the fact that it's just as important to train your neck as it is your abdominals, back, and hips.

You could even classify the following exercises as "core training," if you're so inclined.

Now that you understand the importance of training your neck, here's a list of the "best of the best" neck exercises.

You'll hit the neck from all angles using both static (isometric) and dynamic (concentric/eccentric) strengthening protocols. On the static exercises, start with 10-second holds and work up to 30-second holds. The dynamic movements are usually performed for 15 to 30+ reps to build endurance.

All of these protocols shown require an understanding and awareness of a neutral spine and head position. I've developed a three-step progression that'll create this type of awareness and give you the strength and stability to support it. This progression can be found in my article entitled Everything Push-Ups.

Here's a great circuit that I learned from coach Martin Rooney.

Don't smirk just yet. These are harder than they look. To increase the challenge, simply move your feet further away from the wall.

This is a great version of the old school wrestler's bridge traditionally performed on the floor.

This exercise should be limited to specific athletes with no history of neck issues.

The lateral harness work is beneficial if a left to right imbalance exists in the neck and upper traps.

Here's another superb exercise I learned from Martin Rooney. It's a favorite of mine!

This one is a great prep exercise for movements like deadlifts, Romanian deadlifts, and good mornings. You can work up to thicker bands to increase the difficulty.

It's okay to allow wrestlers to "round out" their back during this movement because it has more carryover to their sport.

This can be done while performing a bench or dumbbell pressing movement. Simply move higher up on the bench so that your head is no longer being supported by the bench. Keep your head straight with your chin tucked downward while pressing the tongue against the roof of your mouth. This'll increase neck muscle activity and stability.

This can also be done while performing horizontal pressing movements on a Swiss ball.

Many coaches are down on integrating the Swiss ball into strength training, but using it here creates a lot of "bang for your buck." You get glute and neck activation while simultaneously strengthening your pushing muscles. You can offset any instability created by the ball by placing your feet in a wider stance.

The Taliban plank series utilizes the Title Boxing "Neck Strengthener" to add overload to the neck during the various plank positions.

This is a convenient way to strengthen your neck because you can use it like a weight vest to increase the load on any and all movements. To insure proper neck alignment, drive your chin toward the back of your neck to create a double chin as directed above.

Even though elbow planks and side planks are pretty self-explanatory, many people still perform planks using faulty alignment. So yeah, don't do that.

Before finishing, I want to give you a few additional bullet points that'll help you get the most out of your new neck training knowledge.

With all of that said, one final word of caution: From here on out, good luck with that top button on your dress shirts. 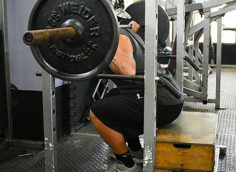 You don't have to ditch all your leg training when your knees are acting up. Try this squat variation instead.
Bodybuilding, It Hurts Fix It, Legs, Squat, Tips, Training
Andrew Coates May 8

It's one of those things that only the REALLY dedicated lifters do. The Zercher squat is as effective as it is painful. Try it.
Exercise Coaching, Squat, Tips
Jason Brown June 19