While training percentages can vary depending on how you’re feeling on a given day, they can still be extremely useful. After all, if you know the specific training effect of various levels of loading, you can select the weight that’s appropriate to your goals. So here’s something I’ve rarely seen presented: a list of percentages that explains what each type of training load can provide and what kind of body they will give you.

Using only your body weight is great for building explosive strength and speed. The best tools for this purpose are jumps and sprints. Not surprisingly, both are very tightly correlated. In almost all cases those with the highest vertical jump also sprint the fastest (note that I mean running, not necessarily the 40-yard dash which is actually a very technical test). I live in a cold climate in which we have snow five months out of the year and it makes running problematical. I’ve found, though, that improving maximum jumping capacity during the winter months allows an athlete to become faster without doing much actual sprinting.

Very few people are actually explosive, and using jumps and sprints is the best way to solve that issue. Trying to lift weights explosively if you can’t even move fast is counterproductive. As such, if you find yourself lacking the capacity to explode with a barbell, you should focus on first being able to move explosively via jumps and sprints. Be aware that even though you’re not lifting any weights, jumps and sprints – if done all-out – are a very high intensity type of work that demands a lot out of the nervous system. As such, dosage (volume) should remain on the low side and all-out work should be limited to twice a week.

This percentage is a bit low for lower-body speed-strength/ballistic work but adequate for upper body ballistic work. The best example of using a 10% load for upper body ballistic work is various types of medicine ball throws; for example, doing throws with 10% of your military press for overhead throws and 10% of your bench press for throws from the chest. To me, medicine ball throws are on the same level as jumps – they’re great to teach the body to explode and will be a very important tool for a strong athlete who wants to learn to develop the capacity to be able to lift big weights with speed.

Being powerful requires that you are both strong and explosive. If you’re already strong, then the key is to work on contraction speed via throws and jumps.

This is the low-end of the optimal loading zone for lower body ballistic movements. For example, jump squats (either with a barbell on your shoulders, dumbbells in your hands, holding a kettlebell between your legs, or a goblet squat hold) are best done in a training zone starting at 20% of your maximum on squats. So, for example, if your squat 1RM is 405 pounds, then a weight of 85 pounds (20 percent) is the minimal load that will get you maximal results from the exercise. This can be done by using an 85-pound barbell on your shoulders, a 40-42 pound dumbbell in each hand, or an 85-pound kettlebell between your legs.

This low-end of the optimal spectrum is the best option for people with little experience in explosive lifting and who are a lot stronger than they are fast. Good exercises to use include jump squats, jump lunges, and jump RDLs.

This is the high-end of the optimal loading zone for lower body ballistic work. The power production is about the same as with 20%, but the speed is a bit lower while force production is a tad higher. This is more appropriate for individuals who already have a significant experience with explosive lifting. Remember, when doing explosive work, you can’t take the same approach as when you do regular lifting exercises. You shouldn’t shoot for using the heaviest weight you can jump with, but rather try to increase explosiveness with a certain load. 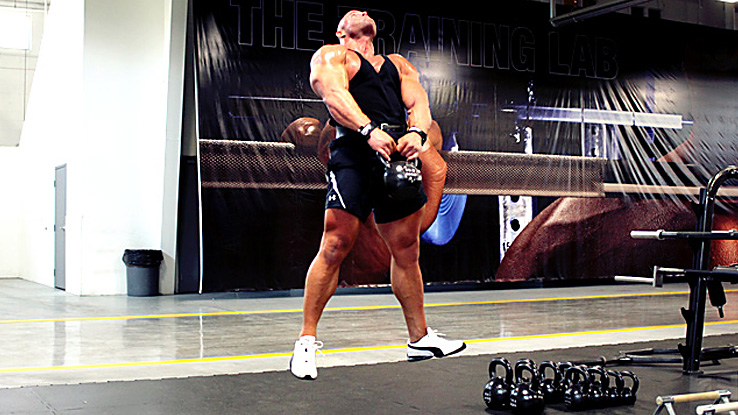 This is the weight limit that all but the biggest freaks should use for explosive work on ballistic exercises. Remember, when doing ballistic work, the goal is not to see how much weight you can jump with, but to be violently explosive. Forty percent is the most a highly trained athlete should use for ballistic exercises. As evidence, it’s worth noting that sport scientists from the Soviet era found a strong correlation between jumping performance with 40% of your max squat and the maximal snatch.

Forty percent is also the low-end of the optimal range for “speed lifting” on regular lifts (squat and bench, for example). I found through experimentation (measuring power output with various loads on the squat and bench press) that when max acceleration is used, peak power occurs between 40 and 60% of 1RM. So, if you want to build explosiveness, you’ll see a significant training effect starting at 40% of your max, as long as you try to be violently explosive.

From experience though, athletes who are super explosive already should use a weight that is higher than 40% when doing speed work on basic lifts. These people are so explosive that the 40% will not provide enough resistance; the body will instinctively decelerate early in the movement to avoid ballistic shock at the joint. However, average people should start speed work at around 40%, as anything heavier is likely to move too slowly and won’t develop their capacity to be violently explosive.

Effect on Performance: Weight limit for building speed, low end of range for building explosiveness and power
Effect on Muscle: Too low to stimulate hypertrophy

This is what I consider to be the best load to use for speed work on regular strength lifts. This is where the peak power lies in 90% of the population. Working on peak power will improve fast-twitch muscle fiber recruitment and will drastically increase muscle hardness and density. Remember that when deciding to do speed work, you shouldn’t go anywhere near fatigue/failure. You must move explosively on all reps. We’re talking 3 to 5 reps per set, trying to explode as much as possible on each.

This is the minimal load that will have a significant muscle-building effect. To get that effect, you should either:

If you use this technique, you do not need to go to failure to make gains.

Sixty percent isn’t a high enough mechanical load to have an impact on growth without incurring a significant amount of metabolic fatigue and metabolite accumulation in the muscle. As such, doing a set where you stop 2-3 reps short of failure won’t do much for growth (while it will work with heavier loads).

For performance training, 60% is the heaviest load you should use for speed lifting on regular strength movements, but only people who are naturally very explosive should use this load.

Effect on Performance: Heaviest load one should use to build explosiveness and power
Effect on Muscle: Builds muscle conditionally

This is the low-end of the optimal range when it comes to stimulating hypertrophy. This can be done either by doing regular sets close to failure (doing around 10 reps per set) focusing on the quality of the muscle contraction, or by doing density work – trying to reach a total of 30 reps in as little total time as possible (doing 4-6 reps at a time with very short rest periods).

Seventy percent is also the optimal load to build explosiveness when using variations of the Olympic lifts (power snatch, power clean, power jerk, push press, etc.), in which case you shouldn’t do so many reps that you fatigue and lose speed. Three to five reps is adequate for most.

This is the high-end of the optimal range when it comes to stimulating hypertrophy. Similar to the 70% range, hypertrophy can occur through doing straight sets close to failure (getting in around 6 reps per set) or by doing density work – trying to reach 30 total reps in as little total time as possible (doing sets of 2-3 reps with very short rest periods).

Eighty percent, however, is the best zone to build strength when you don’t want to make any inroads into recovery, in which case multiple sets of 3-5 reps (normally 3-5 sets) is the proper loading scheme. When doing variations of the Olympic lifts, 80% is the load that will build power and strength equally (70% will build more speed/power and 90% more strength).

This is what I consider to be the high-end of the optimal zone to train for strength. I used to recommend that lifters train in the 90-100% range often, but over time I found that while the range is very effective for quickly peaking strength (which is essentially learning how to demonstrate the strength you have), it’s not the best zone to actually build strength. Furthermore, you can’t train for too long in the 90-100% range or do enough volume to solidify the strength gains without risking neural fatigue. When training at this percentage, 2-5 sets of 1-3 reps are ideal.

Training above 90% is best done for short training cycles to learn to demonstrate the strength you built via training in the 80-90% range. Training between 92 and 100% can lead to rapid gains in strength in the well-trained individual, but mostly through improvements in neural factors. Recent experimentations led me to the conclusion that work in the 92-100% range should be limited to short periods of time (2-3 weeks) to peak strength and not as a way to build strength. While the occasional single with 92-97% of your max is fine once in a while, real training in the 92-100% range should be limited to 2-3 weeks out of 12 and used only for 3-4 singles per session.

I’ll be the first one to point out that percentages can’t always be followed to the “T”. Eighty percent might feel like 90% on some days because you’re tired or sick, but knowing the effects of each training zone will allow you to make the best choices when it comes to designing your own training plans.