It's 2011 and I'm walking down the street in Amsterdam. I've walked a mere four blocks from where I'd just purchased a hundred dollars in Belgium chocolates.

I reach down to get another piece... and they're gone. I turn to my friends and frantically say, "What happened to my chocolates?! Did you take them? Did someone steal them?"

Than I realize my friends are nowhere around. I look down at that huge box of chocolates cradled in my arms. What happened to the chocolates? I ate them. All of them!

Then it dawns on me. I say out loud, almost shouting, "Bro, you are f*!cking high!"

I had never been high before. I always hated the stuff because I couldn't stand to have anything in my lungs. But in Amsterdam a friendly dude at a coffee shop gave me a brownie. So I did what any hardcore lifter does post-workout. I ate it. And then I ate another one.

So now I'm stoned out of my gourd and I only know two things:

First, I felt so relaxed it was like I was floating on a cloud.

Second, I was the hungriest I had ever been in my life! After scarfing those chocolates, I continued inhaling the equivalent of three big dinners over the next three hours... which to me felt like only 30 minutes.

You may be wondering what this has to do with you and your desire to build muscle and burn fat.

A friend of mine in college had a philosophy he would repeat whenever I'd give him a hard time about his pot habit. He'd say, "I lift, I get high and then I eat. I lift to get jacked. I smoke so I'll eat. I eat to get jacked."

He was going to smoke regardless, so he rationalized how it helped him. It's just like alcohol – people who are serious lifters also use recreational drugs and they want to know if that habit is hindering or helping their cause.

That's what this article is about. To help you understand the ins and outs of marijuana usage and how it impacts training goals.

My story above illustrates my first real world experience with the endocannabinoid system, one of the most far-reaching metabolic systems in the body.

Scientists discovered that compounds in marijuana, the two main ones being tetrahydrocannabinol (THC) and cannabidiol (CBD), bind to two main receptors in our brains and bodies. These receptors were then named after the marijuana constituents and became known as cannabinoid receptors 1 and 2 (CB1 and CB2).

THC and CBD act on the CB1 and CB2 receptors in much the same way AEA and 2-AG do. (If you want to sound smart the next time you're out with friends, just throw that sentence out randomly.)

You can think of the endocannabinoid system as one of the body's major command and control centers for tweaking your metabolism's ability to adapt and react to the world around it.

So when you smoke weed, or in my case eat it, you're basically like a computer hacker busting into your metabolism's mainframe.

Let's get a few things out of the way. First, there's not a ton of research on humans, exercise and marijuana. Most of what we know comes from rat studies (you should see how tiny their bongs are.)

The problem is, the rat endocannabinoid system is slightly different than ours. So, we can't extrapolate directly from rats to humans.

Another confounding variable when studying marijuana is that very little research exists in the realm of randomized double-blind clinical trials with weight lifters. So, much of what you're going to get from me here is extrapolation of research based on mechanism, animal studies and populations studies.

Basically that means this info comes with a very strong caveat: More studies need to be done.

All that being said, I've done my best to give you some real-world takeaways based on something other than just gym lore and hearsay.

The direct effect of cannabis on performance is clear: It hinders performance in every way and is not something that can aid your exercise endeavors.

This can be confusing when you realize it's on the banned substance list for most regulating bodies in sports. However, this isn't based on any performance-enhancing benefit, but rather the fact that it's an illegal substance in most places and isn't seen as being in "the spirit of the game." So its inclusion is more a political one than a scientific one.

Using marijuana to enhance performance is like taking Ex-Lax to control diarrhea.

These effects have been shown to last up to 36 hours after usage.

As far as muscle building, chronic pot use may interrupt mTOR signaling through down-regulation of the CB1 receptor (mTOR is one of the major signals for muscle growth). I use the word "may" here as studies show a relationship between mTOR signaling in the nervous system of rats. Acutely, studies seem to suggest lowered testosterone and higher cortisol post exposure.

Together this information means that using weed in the hours before or after exercise isn't a great idea if you want to perform at your best and recover adequately from training.

If we dig a little deeper and understand the endocannabinoid system, we realize there might be some utility in terms of dealing with overtraining and recovery.

Remember, to gain muscle you must achieve a caloric surplus. For many hardgainers this is difficult. Short-term marijuana use increases appetite and can help in this regard.

At the same time, cannabis use can be relaxing to the nervous system and might be able to play a role in overtraining syndrome.

Cannabis has anxiolytic effects, it increases HRV (an indication of decreased nervous system stress) and it aids sleep. All of this could be useful for an overtrained athlete who has a long weekend to focus on recovery. 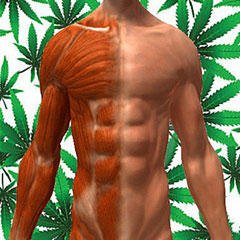 The effects of weed on appetite are interesting. Cannabinoid receptor 1 (CB1) controls this effect. When you use marijuana, the many different cannabinoids, mostly THC and cannabidiol (CBD), interact with CB1 and elevate appetite. This happens acutely.

Interestingly, chronic use may actually decrease appetite. Research on rats and population studies on marijuana users support this dual appetite effect. Short-term cannabis use elevates appetite. Long-term or chronic use may cause a down-regulation of appetite.

This is believed to be due to two mechanisms. THC binds the CB1 receptor over our own naturally produced cannabinoid 2-arachidonoylglycerol (2-AG). THC has a weaker impact on appetite compared to our own 2-AG. At the same time, continual marijuana use downregulates CB1 receptors over time and decreases appetite.

This is supported by the fact that chronic users – those using three times per week or more for longer than a year – suffer less obesity and may actually eat less than non-users.

The two major strains of cannabis are indica and sativa. Indica has a lower level of THC compared to cannabidiol (CBD). Sativa is the reverse.

This is why sativa is often preferred by those who enjoy getting high – sativa has more brain effects than indica. Then of course there are varying blends that combine indica and sativa to get varying percentages of THC and CBD.

In one study looking at high THC/low CBD, medium THC/medium CBD, and low THC/high CBD, it was found that appetite stimulating effects were lowest in the low THC/high CBD strains. In fact, there's some indication that cannabidiol may actually be an appetite suppressant.

This is interesting info for those who use marijuana and want to know which strains are most likely to send them on a 3,000 calorie midnight Taco Bell run. The hardgainer may love this effect, while the hard-loser may not.

Also, if you're using marijuana to aid in overtraining and recovery, you may be interested to know that the high CBD strains have equal fatigue recovery merits as the high THC strains, but with much less appetite effects.

So for a hardgainer looking to aid recovery and pack in the cals, high THC levels in the brain are best (i.e. sativa). For the person overtrained and wanting to minimize fat gain and lose weight, low THC and high CBD may be best (i.e. indica).

As noted, the short-term and long-term effects of marijuana use may be different. Short-term use definitely increases appetite, relaxes, and has a demotivating effect. All of this would suggest that use leads to weight gain.

However, long-term effects seem to suggest a down-regulation or adaptation by the cannabinoid receptors, inducing reverse effects. This leads to a reduced appetite. Again, this is supported in population studies where smokers are leaner than non-smokers.

At the same time, cannabidiol (CBD) and another cannabinoid from marijuana I haven't yet mentioned, tetrahydracannabivarin (THCV), have shown in rats to decrease fat storage and increase fat burning.

Given these considerations, we may be able to say that high THC marijuana (sativa) is more likely to cause fat gain than higher cannabidiol and lower THC strains (indica).

I'm making these conclusions based on my extrapolation of human population studies, known effects on appetite, and some of the mechanisms we've seen in rats. Not perfect, but the best I can do given limited data.

There are some pretty striking difference in marijuana use and its effects between men and women:

The body stores cannabionoids in fat tissue. When you fast or exercise, research shows there's a marked increase in blood levels of cannabinoids.

Don't worry, the research shows these levels likely don't go high enough to make you test positive on a drug test, but this may be a consideration for weight loss.

The cannabionoids present in marijuana not only have effects on our cannabionoid receptors, but also interact as direct enzyme inhibitors for many of the sex steroid generating compounds.

If you're a user and you notice lowered testosterone and progesterone or estrogen dominant effects, check your marijuana use. Realize that even if you haven't used in a while, you may be impacting your hormonal metabolism during your weight loss efforts due to these effects.

I realize this article has a lot of info with not as many useable tidbits as we'd all like. Some of the information may also seem confusing and contradictory. This is the problem with such a complex issue and incomplete or limited research opportunities.

However, here are the highlights and usable points (with more research needed to confirm or deny):

Given the totality of the research and my extrapolations of the information, use of marijuana likely has little to no benefit for inclusion in a weight lifting and lean body lifestyle, especially given the many other activities that can cause relaxation and aid recovery.

That being said, nothing I have found suggests that occasional recreational use of marijuana in the context of an otherwise healthy lifting and fat-loss lifestyle is that big of a deal.

How do you finish off a tough leg day full of squats and deadlifts? Like this.
Exercise Coaching, Tips
Mark Dugdale March 22 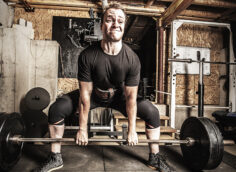 Gym shut down again? Or are you just looking for new ways to ramp up your home workouts? Try these uncommon but effective training methods.
Bodybuilding, Powerlifting & Strength
Christian Thibaudeau January 10

Forget those three-month diet plans. If you have six weeks and an ounce of discipline, you can get in awesome shape. Here’s how.
Fat Loss Training, Training
Erick Minor September 23