I’ll say it right off the bat to avoid any confusion: to build as much muscle mass as possible, nothing beats the basic compound movements:

However, these money exercises also have their downside: they tend to under-work certain muscle groups and overwork others.

When you’re doing a squat, your body doesn’t know that you’re trying to build big quads. It only knows that a big ass weight is trying to crush you into the ground and that if you’re not successful in lifting the weight, it might do just that! So as a point of survival, the body will rely on the muscles better suited to do the job.

In the squat, the major muscles involved are the quadriceps, glutes, hamstrings, and lower back. In the perfect world, most of the workload would be taken up by the quads. In reality, this isn’t always the case because people have different levers and body types.

Simply put, the squat is the movement that will build the most lower body mass; however, that mass might not end up being distributed the way you want. The same holds true for all other basic exercises.

For that very reason, most of us gym rats will need to add assistance exercises to stimulate the muscles that might’ve been under-worked by the basic lifts. Furthermore, some of us might have glaring muscle imbalances (some muscles being drastically weaker than others) or aesthetic imbalances (some muscles being underdeveloped compared to others) that need some special attention and thus some special exercises.

Finally, it’s possible that an injury might force us to find some innovative movement that will allow us to continue training a muscle group while avoiding making the injury worse.

For all these reasons, it’s important to have as many tools as possible in our toolbox. Some of the exercises I recommend might be left unused for years, but they might eventually become “just what you’ve been looking for!” So read up and fill up that toolbox!

This has become my favorite “bodybuilding” back exercise. It’s simply unparalleled when it comes to the focused development of the latissimus dorsi, with a special emphasis on the lower portion of the lats. This exercise is derived from Vince Gironda’s motorcycle rowing.

I basically use the same movement pattern, but with only one arm. The unilateral aspect of the movement allows for a greater activation of the HTMUs (high threshold motor units) in the lats while also facilitating a fuller range of motion. 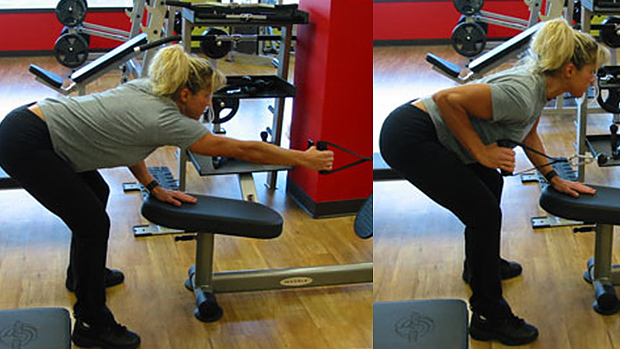 The trunk angle basically inhibits the participation of the rhomboids and thus focuses the effort mostly on the lats. The key points are to really get a deep stretch of the lats in the starting position and to aim for your hips with the elbow of the pulling arm.

This is a cool exercise that’s basically the opposite of a squat. It’s fairly easy, so it’s best kept as the second exercise of a hamstrings superset or used with some special training techniques such as double contraction or super-slow reps.

Take a lat pulldown bar attached to a high pulley station and shoulder it like you would with a squat bar. Take a squatting stance and slowly pull yourself down. This is the same movement pattern as with a squat but the resistance is pulling upward instead of downward. 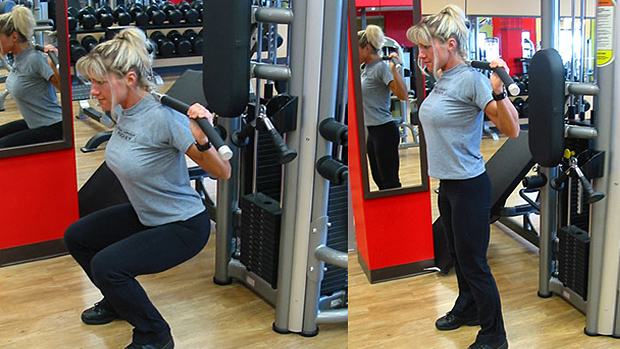 This exercise focuses primarily on the hamstrings; it’s basically the closed-chain equivalent of a seated leg curl. It also works the lats, rear delts, forearms, and biceps, which must all contract isometrically to hold the bar in place.

The key point is to avoid using your own body weight to lower the weight. Some people will let themselves fall down, which decreases the need to rely on the muscles to do the job.

If the weight is too heavy and your feet tend to come off of the floor, put a pair of dumbbells over your feet or have partner hold you down. You can also vary the foot stance and even use a lunge/split squat stance if you want.

The best methods to use with this exercise are:

I like this exercise for athletes and for individuals with mild shoulder problems (to be used instead of a dumbbell or shoulder press). It’s more specific to athletes than regular overhead presses because of the pushing angle. It also places much less strain on the rotator cuff than regular overhead pressing, making it a relatively pain-free movement to those with tender shoulders. 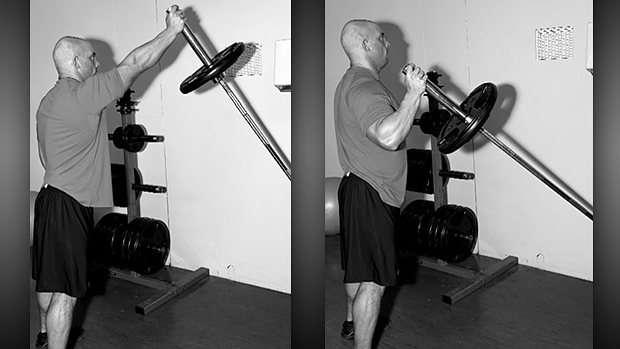 Simply put one end of the bar in a corner and load the weight on the opposite end which is also used to press. Start with the bar a few inches from your shoulders and press it upward and forward at a 45 degrees angle.

You can also perform this exercise as a push press, bending the knees at around a 135 degree angle to push it with the legs and arm at the same time. 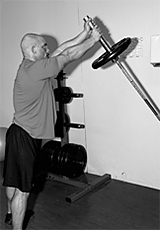 You can even perform this exercise with two arms at the same time (either as a push press or a normal press).

For individuals with very strong and dominating front deltoids who have problems building up their chests, this exercise can be a lifesaver. It’s fairly similar to a cable-crossover when it comes to movement pattern; however, because you’re lying on a bench you can’t cheat or use your shoulders, so all the stress is focused on the pectorals.

This movement is thus the best way to isolate the chest. It can be used as part of a pre or post-fatigue superset (combined with a pressing movement) or as a standalone movement at the end of a chest workout. 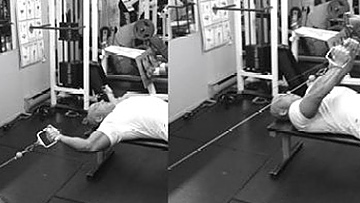 This movement is similar to a regular cable flye in that you’re using the low pulley stations while lying on a bench. The difference is in the placement of the bench and in the movement pattern.

This is a movement I like more every day! First, it’s a great teaching tool for the proper athletic back squat. Simply put, you absolutely can’t perform this movement if you don’t squat down correctly. You must keep the chest puffed out and the lower back arched (beach position), otherwise you won’t be able to go down at all.

It also avoids putting the lower back under compressive stress and it’s very specific to many athletic movements. For all these reasons I feel that it’s an exercise worthy of being included in your rotation of squatting movements. 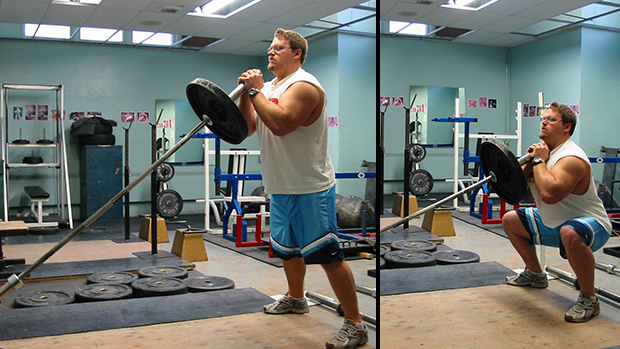 Note that Carl is using a special apparatus to hold the barbell, but you can simply put the end of the bar in a corner like with the corner barbell press.

The fact that most lifters/athletes have a serious imbalance in their rhomboids (they’re too weak) should be pretty well known to most T-Nation readers. Weak rhomboids can wreak havoc on your posture, shoulder health, and overall athletic performance.

There are several good exercises already being used across the strength training world, but I’m going to throw in my personal favorite. I feel that it’s a superior movement because it combines a dynamic and an isometric action, which drastically increase rhomboid activation. 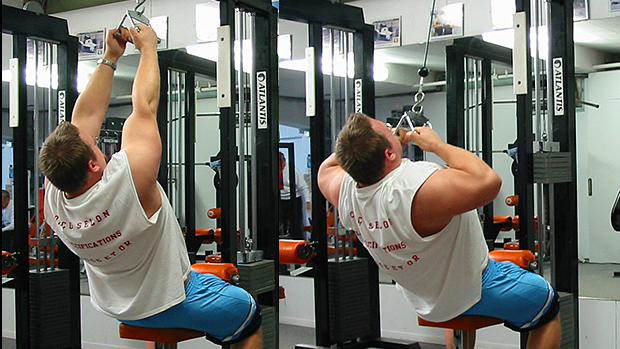 At first glance this movement seems to be pretty much like a regular parallel grip pulldown. However, there are two important distinctions:

Both of these techniques allow you to maximize rhomboids activation. Another important point is to keep the torso bent at a 45 degree angle. Don’t swing with your lower back; start with the trunk bend and maintain the same angle during the execution of the exercise.

I learned this exercise from top performance coach Mike Boyle, and I’ve been calling him “the ass man” ever since! You’ll need a mini Jumpstretch band or similar. Position the band as illustrated in picture one. 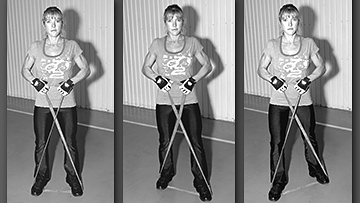 To perform the movement, you’ll walk by attempting to push the hips out against the band while keeping the torso perfectly stable. Only the legs should move, not the upper body. The movement can be performed walking forward, backward, or both. Keep the shoulders down and back.

Hopefully some of these exercises will end up being useful additions to your own toolbox. While they can’t replace the basics, they can be a nice addition to a program when used to fill a specific need.

For some of you, one (or more) of these exercises will be a godsend, helping you solve a problem that’s been plaguing your training for quite some time. For others, they might not be of any use right now. But even then, keep them in your toolbox; you never know when they might come in handy!