The straight barbell is king. If you have a quality barbell, a platform, and some squat stands, 99% of your training needs will be covered. You don't "need" dumbbells, kettlebells, bands, or chains. Still, that doesn't mean you can't add some variety into your training – especially if you've got a few years under your belt and a thick callous on your back.

Specialty bars have grown in popularity, especially since Westside Barbell began introducing them into their training. These bars have been a much-needed shot in the arm to a lot of lifters, or at least provided them a little variety.

Here's a breakdown of the most popular specialty bars – their positives and negatives, and how you can use them in your training.

The cambered bar is one of the best bars I've ever used. It has a very slight camber or curve to it, much like a cheap barbell would if loaded up with an enormous amount of weight and left sitting in a power rack (gym owners love that).

The main advantage of the cambered bar is that it takes stress off the shoulders when performing squats. Your hands rest lower on the cambered bar than they normally would on a straight bar, thus making it ideal for people with injured shoulders or poor flexibility.

This makes it great to train with for entire meet cycles, relieving shoulder stress and allowing lifters to train their bench press effectively. For this reason the cambered bar is a tremendous resource for older lifters and anyone with well-worn shoulders.

The only down side to the cambered bar is that it sits very funny in a power rack; when placed in a normal power rack, the bar droops down. You have to manually push the bar up before each set and hold it in place before getting under it.

Also, to get the benefits of the camber you have to grab wide, which in a power rack can lead to some intense pinching of the hands when the bar is racked. Subsequently, the bar is most effective in a Monolift or squat stands that are brought in narrower.

Overall, the cambered bar is great for anyone, and might even prevent shoulder problems and biceps tendonitis in lifters. It can also be used for lunges, good mornings, or any other lift that requires a bar across the back. While price may be a little steep for some people, it's hard to put a price on healthy shoulders and more years of productive training. 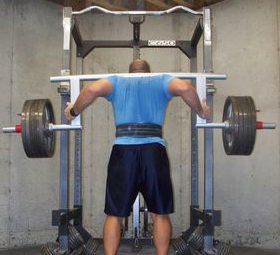 This is probably the oddest looking bar and like the cambered bar, great for relieving stress off of the shoulders. But the bar is much more than shoulder relief – it really turns squatting into a different movement.

What most people first notice when using the Cambered Squat Bar is how unstable the bar is. The weight rocks back and forth and forces the lifter to stay very tight and controlled. While this might sound like a good thing, this makes it the last bar I'd let a beginner use. When someone is trying to learn a new movement, the last thing you want to do is throw more curveballs at them.

The concentric phase of a squat with a Cambered Squat Bar is always interesting. Due to the instability of the bar you can't push as fast at the bottom, but you have to push tight; tighter than you normally would (or should) with a straight bar.

This is a great way to remind you to stay tight and push with a controlled and steady force out of the bottom of the hole. For someone that spent their life training with a fast concentric phase, this was a real learning process for me. But slowing down with this bar allowed me to learn how to squat faster because the concentric phase had to very focused.

The Cambered Squat Bar is also great for good mornings.

The big downside to this bar is that it always seemed uncomfortable on my back. This is in large part due to the hand placement – because your hands are around waist level, you don't get to form a nice shelf with your upper back to rest the bar. Thus, placing the bar in a low bar position is very dangerous.

Also, because the bar is so drastically different in shape, it can alter many people's squat form. Not greatly, but enough that it becomes a different movement than a straight bar squat.

A great variation to throw in, but in a traditional lifting program, it may be best used with assistance lifts. 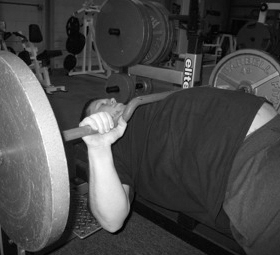 Because most raw lifters are weakest in the low to mid-range of the bench press, this bar is great for developing that area. Unfortunately, it can be very risky, as the increased range of motion can strain the pecs and shoulders.

Lifters have used smaller boards on their chest to restrict some of the strain (a 1/2" board can do wonders) and still be able to get the benefits. I've also seen many lifters use the bar the opposite way, turning the camber the other way and using it as a makeshift board press.

Due to the strain on the shoulders, the bar can be very awkward to use with heavier weights. The camber can start to tilt when you're pressing and is more hassle than it's worth. Also, the Cambered Bench Bars that I've used didn't have the tough knurling and seemed thinner than a standard barbell.

I've used this bar as an assistance movement, much like someone would use dumbbells. I certainly wouldn't change out the standard barbell bench press for this bar, but I can see its benefits as an assistance exercise.

Good for assistance work, but only for a select few that can handle the increased range of motion.

After the cambered bar, this is probably my favorite specialty bar to use. Like the other bars it's easy on the shoulders, but this bar shines in several different ways:

Building your deadlift and your squat. This bar is great for strengthening your entire lower body and back. The cambered part of the bar dumps you forward, forcing you to fight to stay somewhat upright. One thing I've learned from some very strong lifters is to purposely round a bit when using this bar during a squat.

This replicates the back position during a deadlift and really forces you to strain in this position. And while this can certainly help your pull, having extra leg and back strength is never a bad thing when trying to improve your squat.

Conan approved! I don't recommend this bar for beginners learning to squat – it's a vastly different movement than a normal squat and can be very awkward. But for an experienced squatter this bar is 100% Conan Approved because you can just grunt lift.

Once I un-rack this bar, I make sure I open the knees, sit back a bit, and stay tight. But once I'm at the bottom, all bets are off. I just muscle the weight up with little regard to form. With my hands on the yoke, I drive everything up at the same time, trying to keep my elbows high.

I'm not saying I squat with bad form, it's simply easier to just squat and not worry about the angle of your pinky toe. It's a nice refreshing departure from what can become an overcomplicated lift.

The form used with the safety squat bar is far different from a straight bar. This is fine if you're an experienced squatter, but may confuse the hell out of a beginner. It's probably not something I'd put a beginner under unless he's suffering from a shoulder or wrist injury.

I'm a huge fan of doing good mornings with the safety squat bar. And I'm embarrassed to say this, but I've done a triceps extensions/JM Press combo-thing with the SS Bar and it was not a good idea. I won't comment on this further due to the high amount of ridiculousness.

There are different opinions about the trap bar, with the majority giving it a thumbs down because it doesn't carry over well to the regular deadlift. For people that don't compete in powerlifting, the trap bar is a great option. You can't argue the benefits of picking up something heavy off the ground whether it it be a trap bar or straight bar, so who am I to say it's not good?

The biggest advantage to the trap bar is the handles – they keep the bar close to your center of gravity. So in theory, it will make the lift safer. The trap bar also uses more quad than a normal deadlift. I've heard stories of people doing high pulls with a trap bar but I've never figured out how that worked. It's also great for doing shrugs and drag rows, but I wouldn't buy this bar just for those two exercises.

The one drawback to most trap bars (or Hex Bars as they're often called) is the short sleeves. Even with the thinnest of plates these sleeves make it very hard to get appreciable weight on the bar. I was lucky enough to purchase a larger Hex Bar about 10 years ago but can't recall where I bought it. If you're stronger than the average person this may prevent you from using this bar in any meaningful capacity.

Great for athletes, if you can find a bar big enough to handle your strength level.

Also known as the Swiss Bar, the Football Bar lets lifters use a neutral hand position on presses, curls, and extensions, rather than pronated or supinated. Of course, the sport specific crowd jumped on this one and heralded it as the poster child of pressing, but let's keep this article free of the riff-raff and fallacies of sport specificity.

The Football Bar is a great variation to the standard bar and very easy on the shoulders. It kills the triceps when using it during a pressing exercise and can also be used for hammer curls. Also, one of my favorite exercises with this bar is the full range front raise – raising the bar until it's over head. This absolutely kills the shoulders and traps and you don't need much weight.

The big drawback is taking the bar off the bench press – it's terribly awkward with very heavy weights and using a lift off is also difficult. This is something that takes quite a bit of time to get used to and thus may relegate the bar to higher rep assistance work when using it for bench pressing.

I used the Football Bar for my pressing exercises while returning from shoulder surgery. This bar has allowed me to train the movements without any strain on my shoulders, so I can't give this bar a higher recommendation...if you're in the same boat or maybe headed in that direction.

Great for the shoulders.

The Bar Is Set

The overwhelming trend today is to pursue complexity, turning strength training into something requiring multiple degrees and side employment as an astro-physicist.

Don't believe it. The bare bones basics will get you anywhere you need to go in the quest for true strength. But once you get some scars and PR's, try out some of these toys.

Yes, your workout needs structure. But it also needs to be flexible, which often leads to more gains. Here's why and how to do it.
Bodybuilding, Powerlifting & Strength, Tips, Training
Charles Staley March 22