How You Get Injured

Aside from being flat-out weak or spastic, injuries happen because of muscular imbalances caused by the chronic demands of competitive sport, improper training, and habitual behavior. Who gets them?

Sports tend to consistently call on the same muscle groups to complete a task. As you practice and compete more frequently, these muscles over-develop in relation to their anatomical opposites.

Training itself can cause imbalances when people favor specific movements and muscle groups. And some exercises are more popular than others.

Desk jockeys and other long-term sitters

The body naturally molds itself to a more comfortable position, which means long periods of sitting and slouching. This causes a significant amount of compensation. Constant sitting can disengage the muscles of the upper back and core, tightening the hip flexors and hamstrings. You can go from temporary iPhone bird-neck to a permanent one... even when the iPhone isn't around.

Fortunately, imbalances can be quickly corrected if you're willing to perform the right exercises.

The vastus medialis (VMO) is the tear-drop shaped muscle on the inside of the knee. Unless prioritized and specifically targeted in training, it commonly falls behind in strength compared to the well-developed lateral (outside) muscles. The heel-elevated step-up will keep the VMO from lagging behind. It's something all athletes should be doing at some point during their training session. Not doing so leaves you vulnerable to knee problems (jumper's knee) and future injury (ACL tears).

Once you build up a baseline of strength, incorporate the heel-elevated step-up into your dynamic warm-up so it remains strong year-around. You should also find a way to incorporate backwards sled drags, hack squats, split squats, and side step-ups, all of which also target the VMO.

The external rotator muscles (infraspinatus and teres minor) rotate your shoulder back like you're winding up for a throw. They're commonly weak because traditional weight-training and athletics rarely challenge them, while the muscles all around them (that they're expected to support) tend to get worked quite a bit.

To avoid having your external rotators hold you back in training or create a shoulder discrepancy that sets you up for injury, make sure you're doing some variation of the 90-degree external rotation exercise.

If you're new to the exercise, start with your elbow at your side (adducted) and work to an abducted position (elbow away from your body). You'll also want to master the movement using assistance from a bench or body-part before moving to an unsupported variation.

The hip flexor muscles are critical to athletic performance because they're responsible for that explosive first step. Unfortunately, they're often wound up too tight because of consistently being in a shortened (flexed) position both in everyday life (sitting) and in sport (crouching). Additionally, they tend to bear the load of core and posterior chain weaknesses, leaving you with tight hips that no stretch can ever fix.

The split squat, or what many refer to as the straight-leg lunge, is the ideal exercise for preventing and loosening hip flexors, not only because the muscles are actively stretched throughout the movement, but because the glutes, core, and VMO are strengthened simultaneously. The movement addresses both tightness and weakness.

Coach yourself. Remember the following:

If you can't check all the boxes, something is weak, tight, or unstable. If that's the case, do them with the front foot elevated to a height where you can do quality reps, with or without weight.

When your lower traps are weak, retraction and depression of the scapulae is weak, your posture and performance is sub-par, and you've set yourself up for a future shoulder injury. Why are lower traps commonly weak? Likely because we're sitting and slouching more than we're standing and walking, and we're pushing and protracting more than we're pulling and retracting.

The first way to fix this weakness is to make sure you're doing just as many (if not more) rows and pull-ups as chest and shoulder presses. But more specifically, make sure you're retracting and depressing the scapulae when you execute these exercises.

Then, because this area is already behind developmentally and will continue to lag behind, you need to actively strengthen it with isolated shoulder exercises that target the lower trap and rhomboids. The trap 3 raise, and the different variations that come with it, are the perfect solution.

Also effective in this regard are the Powell raise and the traditional bent-over or prone lateral raise.

In all cases, the goal is to activate those mid-back muscles and gain complete control of your scapula. You can eventually progress to more challenging bilateral (two-arm) variations that will have you out-pressing, out-posturing, and out-performing the competition, with minimal chance of injury.

There's not necessarily a universal lack of glute development in athletes. Hockey and soccer players have some of the biggest butts on the block. However, a lack of glute activation and strength, especially with the hips fully extended, is common.

Similarly, there's a noticeable lack of hamstring development in many athletes, predominantly because of overdeveloped quads, but also because of under-utilized and under-trained hamstrings. Fortunately, most athletes put themselves through a good amount of hip extension exercises like the deadlift, but very few take the time to isolate the glutes and hamstrings.

The single-leg Romanian (or semi-stiff legged) deadlift and single-leg glute bridge address this problem quickly. Both exercises should be perfected without weight before adding resistance. In the case of the RDL, that means eventually using a barbell.

For the glute bridge, that means eventually doing them between two benches with a dumbbell on your waist, or flat on your back with your heel on a Swiss ball.

Pair your exercises the right way and you'll get bigger, faster. Here are 28 ways to do it!
Bodybuilding, Powerlifting & Strength, Training
Tom Furman April 28 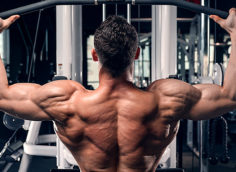 How to Build a Huge, Complete Back
Back, Training
Christian Thibaudeau February 14