An intelligent lifter knows when it’s time to zero in on a lagging muscle group and bring it up. These bodybuilder-proven supersets will do just that. 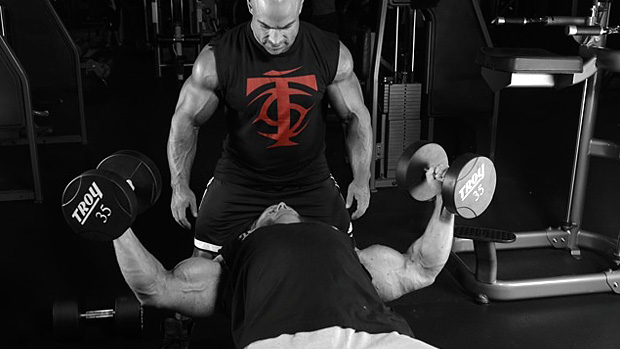 Need to add some fullness to your pecs? Superset flyes with the barbell bench press, in that order. Although you’ll be humbled by how little you can bench after first doing flyes, you’ll ultimately be shocked by the results.

This superset is an implementation of what’s called pre-exhaustion. Essentially what we’re doing here is isolating and fatiguing the pecs via the single-joint flye movement. Then, as you move on to the multi-joint bench press, you’re ensuring that it’s the pecs that will fatigue first, as opposed to the triceps or anterior deltoids.

Regardless of the rep range, taking a muscle to the point of failure/fatigue is the single best way to cause an adaptive response: muscle growth. This superset works via a prolonged time under tension (TUT) and subsequent increase in metabolic stress on the pecs, both of which lead to a hypertrophic response.

After warming up properly, grab a set of dumbbells that’ll allow you to get about 8-10 flyes, but no more. Feel free to occasionally vary the stimulus and go as heavy as your 6RM or as light as your 12RM. The same recommendation applies when you make the transition to the barbell bench press. Typically go with your 6-10RM.

The tricky thing is this, though: We’re talking about your 6-10RM after taking a set of flyes to failure. By “failure” I mean doing as many full ROM reps with good form as possible. This is also known as momentary muscular failure or concentric failure.

Now, most people tend to overestimate how much they’ll be able to do on the bench press. So if your sense of self-worth and how much people see you benching are tied together, this superset may not be for you. Remember, your pecs will be pre-exhausted.

Tip: Do these two movements on the same bench so that you can rapidly go from the flye to the press. After all, a superset isn’t so super if you rest between exercises. 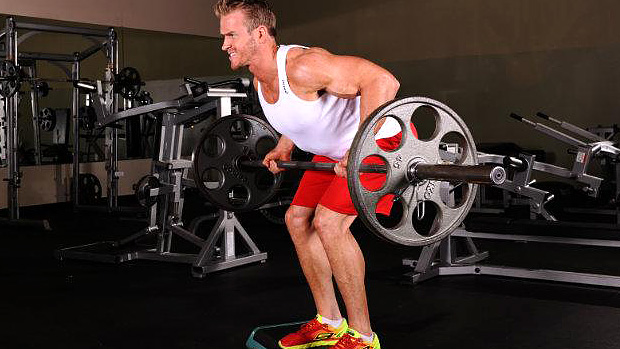 Are you the owner of some lagging lats? If so, this superset will get you headed in the right direction.

This pullover/row combo also utilizes the pre-exhaust technique. Specifically, we’re pre-exhausting the latissimus dorsi with the decline dumbbell pullover and then going straight into the underhand barbell row.

When you do the underhand barbell row, there’s a chance that the upper back (mid-traps and rhomboids) may reach failure first, especially if you tend to be upper back dominant. If it’s not the upper back failing first, it could be fatigue in the posterior deltoids, biceps, or even the erector spinae that’s the limiting factor in the movement.

Rest assured that if you do decline pullovers first and hit them hard, taking them to (or very near) failure, your lats will get topped off nicely via the underhand row. This will likely result in a lat pump you haven’t had in quite some time!

I say “very near” failure here, because the dumbbell pullover is one exercise where you want to exercise a little common-sense. The weight of the dumbbell and its leverage in the stretched position is a lot for the shoulder joint to handle in extreme shoulder flexion. Don’t use this as an excuse to apply half-assed effort, but use common sense. 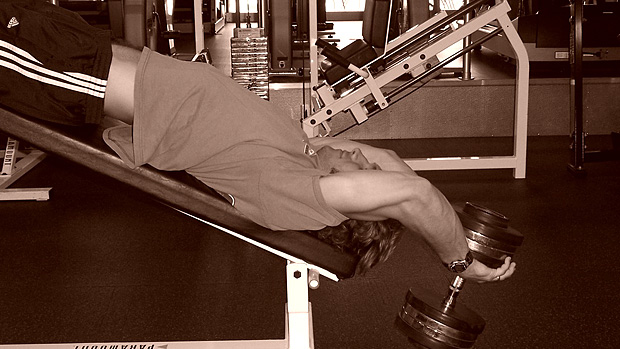 Select a weight on the pullover that’s in the 8-10RM range. You could occasionally bump the reps up to your 12RM, but I wouldn’t recommend going heavier than your 8RM on dumbbell pullovers. Doing so can be a bit sketchy on the shoulder joint.

If pullovers acutely aggravate your shoulder in the stretched position, it’s quite likely that you have impingement issues. Sure, you can shorten the ROM and probably avoid irritation, but focus on getting that impingement fixed instead of just working around it.

Form tip: Although you definitely don’t want to keep your elbows fully extended, avoid bending your elbows too much as the dumbbell goes down/overhead, otherwise you’ll turn it into too much of a triceps exercise.

Speaking of the triceps, if you haven’t done pullovers in a while, you’re probably going to notice some triceps soreness a day or two later, specifically in the long head of the triceps (which is situated on the medial aspect of your upper arm).

That’s normal and doesn’t necessarily mean you did the exercise wrong. It’s simply because the long head of the triceps not only crosses the elbow joint, but also the shoulder joint. As such, it gets stretched quite a bit and subsequently suffers from some microtrauma that may lead to DOMS.

Variation note: You can do this superset with the traditional dumbbell pullover on a flat bench, but if you have access to a decline bench go with the decline version. It increases the range-of-motion. 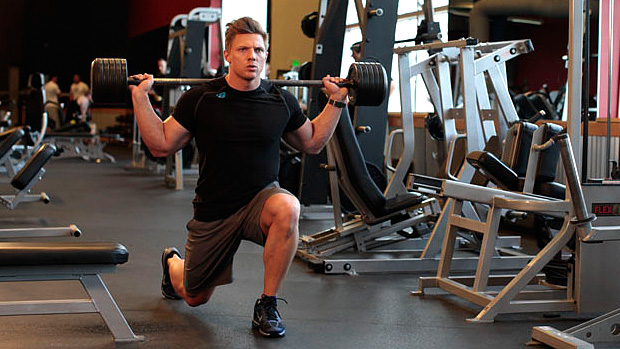 This combo is extremely effective for blasting the quads and glutes. Even if you’re not into building muscle and train more for fat loss benefits, you’ll find that a lighter version of this superset is incredibly beneficial due to the metabolic demands of stimulating such a large amount of muscle mass at once. In other words, you’re gonna really get out of breath, but it’ll be worth it!

This squat/lunge superset works by combining two incredibly effective compound exercises for the lower body. By combining the two exercises, it’s likely your quads will be maximally stimulated to the point of momentary muscular failure, thus leading to adaptive benefits. Although these exercises are quad dominant, they still hit the glutes quite well.

With the barbell squat, generally opt for a weight in your 8-12RM range, but don’t hesitate to venture outside this range as squats are effective in pretty much any rep range.

I do realize, though, that it may be far more user friendly to do the dumbbell version in some gyms. If that’s the case, don’t sweat it, either is fine. And depending on your strength/conditioning status, this may be a moot point. You may not need any added resistance at all on the lunges after doing squats.

As for rep range on the walking lunges, typically go with a weight that puts you in the 8-12RM range – as in 8 to 12 steps with each leg. If you’re going for more of a conditioning/endurance effect, go up to your 20RM or so.

Form tip: To make sure you hit your glutes well, use a full ROM on each of these two exercises. On the squat, full ROM means you squat to the point where your hip joint is level with your knee joint, or even a tad deeper.

On the walking lunge a full ROM means 1) taking a long enough step so that your knee doesn’t go out much beyond your toes in the bottom position and 2) going down to the point just prior to your kneecap on the trailing leg touching the ground, which should put your thigh on the forward leg right about parallel to the ground.

Note: The walking lunge is a great movement-based way to stretch out your likely tight hip flexors. To receive this benefit, make sure to take long enough steps and go down deep enough. Also, avoid leaning forward with your torso as you approach the bottom position, which you’re likely to have a tendency to do if your hips are tight.