The lateral raise is everyone's go-to for building the medial delts. This makes sense because the muscle's function is to raise the arm to the side. There are, however, a few glaring faults with the dumbbell lateral raise. Matching the resistance profile to the strength curve is the key, and that's precisely the problem with standard lateral raises.

Every muscle group has a strength curve through its movement pattern. The strength curve provides a model of how much force you can produce throughout a range of motion.

On extension patterns like squats and presses, the muscle is weakest at the bottom and strongest at the top. This is known as an ascending strength curve.

Pulling movements have the opposite pattern – strongest at the bottom and weakest at the top. This is a descending strength curve. Think of a dumbbell row. Getting the weight moving is easy, but as you approach peak contraction it becomes harder.

For example, a dumbbell flye is hardest at the bottom when the lever is longest and gets easier as your arm comes in towards the body. For an exercise to be maximally efficient it should match the strength curve of the muscle being trained.

Okay, So What About Delts?

When trained in isolation, muscles tend to have a strength curve in which the muscle is stronger through the mid-range and weaker at both extremes. This can be illustrated in a bell-shaped curve. The lateral raise is an example of this.

Unfortunately, when performing a lateral raise the resistance profile doesn't match the strength curve. When your arms are down by your side there's basically no tension on your delts. Then as you begin to lift, the lever arm continues to get longer and longer until you reach the top. This position is actually where the muscle is in its fully shortened (and weakest) position.

So, the load is "heaviest" when you're weakest – not a good combo! Thus, the weight you can use with good form is limited by what you can do in the weakest position. The exercise is, therefore, a sub-optimal stimulus for the delts for the vast majority of the range.

Don't Do What Most Lifters Do

They try to get around this issue by loading up heavy and swinging the weights on their lateral raises. From a charitable viewpoint, we could assume they know what they're doing and are just using a little momentum to effectively challenge the mid-range.

More realistically, they're just letting their ego take over and giving themselves a lower back and trap workout while their delts are left untouched. And as a result, they don't grow.

Add this to your next shoulder day. It's the incline side-lying lateral raise:

The solution to the limitations of the lateral raise is actually quite simple. Manipulate your body position to allow for the lever (your arm) to be longest in the middle and shorter on either end.

By grabbing a bench and setting it up at about a 60-degree incline and doing your lateral raise one arm at a time you achieve exactly this. Now every inch of every rep is a challenge for the side delts. This makes it a far more efficient muscle builder. 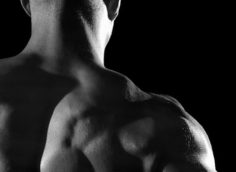 Build your upper back and neck with this unusual exercise. You'll stand straighter and lift heavier.
Back, Tips, Training
Lee Boyce September 17

Two exercises are all you need to test out your upper body strength for sports performance. Check 'em out.
Tips, Training
Jim Wendler May 12 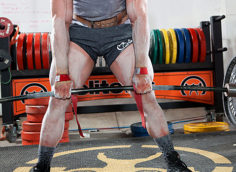 Most lifters go super wide, but that only works if it fits your anatomy. Here's how to find YOUR best stance.
Deadlift, Powerlifting & Strength, Tips, Training
Tony Gentilcore November 14