There probably isn't a person alive who doesn't think curcumin is legit.

The research is clear: It's a potent pain reliever and anti-inflammatory. It increases testosterone levels and simultaneously exhibits anti-aromatase properties. It enhances cardiovascular health and seems to thwart prostate cancer. It reduces body fat. Hell, it even seems to fight mosquito-born viral diseases.

But yes, some supplement company founded in India paid for the research, and I suppose that's a potential bugaboo because there's the possibility of coercion. Maybe the company held guns to their dogs' heads or forced them to watch Bollywood movies until they agreed to publish favorable results, but people pay too much attention to that. I mean, who the hell else is going to pay for the research on a particular supplement that has no patent protection? You? Your Aunt Trudy? I think not.

Besides, there's so much positive research on curcumin that it's plain crazy to think that research teams were somehow influenced, and based on what we already know about curcumin, this one makes sense.

The researchers acquired 28 Wistar rats and divided them into four treatment groups:

The human equivalent to the dosages of curcumin they received is about 1,000 to 1250 mg. a day. After 6 weeks, all four groups of rats ran to exhaustion on treadmills, which is a kinder version of the more conventional exhaustion test that involved throwing them into a bucket and seeing how long they could tread water.

The rats in the exercise plus curcumin group had by far the most endurance, but how it caused that is pretty cool.

At first glance, the curcumin reduced the concentration of both glucose and lactic acid. That means muscle cells used sugar more efficiently and experienced less fatigue (or fewer fatigue factors).

Additionally, various fatigue and muscle damage factors were lowered, including kappa B and heat-shock protein 70. Further, various muscle markers indicative of exercise adaptation increased, things like SIRT 1 protein (which causes cells to heal faster, in addition to increasing lifespan), PGC-1-alpha (which causes mitochondria to divide and replicate), and GLUT4 (which led to the more efficient use of glucose).

Suffice it to say that if you had magical powers and could control time and space, this is how you'd have muscles react in response to exercise.

There are plenty of reasons to take curcumin every day, but if you want to try to approximate the kind of effects seen in the described study, you'd need to take about 1,000 to 1250 mg. of conventional curcumin a day, probably in the morning with breakfast.

However, curcumin is notoriously stubborn about being absorbed, even when piperine is added. But Biotest's Micellar Curcumin™ formula contains solid lipid curcumin particles that produce 95 times more free curcumin in the bloodstream than standardized curcumin with piperine (Gota VS et al, 2010).

One capsule would be more than enough to presumably duplicate the results seen in the described study.

If you don't take care of workout supplementation, you might as well not train. Here's how to get it right.
BCAA, C3G, Nutrition & Supplements, Palatinose, Plazma, Workout Nutrition
TC Luoma September 19
Thanksgiving was a fatty, sugary good time. I've never been one to do the old "modified recipe" thing when it comes to traditional holidays. Mashed potatoes and gravy, eggnog, pumpkin pie – it's all good to me.
Feeding the Ideal Body, Nutrition & Supplements
Lonnie Lowery, PhD December 19 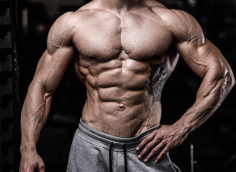