If you're feeling weak, all you have to do is saw into a bloody steak that's about the same size and shape as a toilet seat and whammo, you've got instant strength.

It's like a third rate super-hero origin story. Wimpy guy gnaws down some red meat and is suddenly possessed of the strength of a dozen heifers. Shoots milk into the eyes of villains to disable them and then leisurely takes them off to jail, stopping repeatedly to graze along the way. (And yeah, I get the distinction between cows and cattle, but cows get turned into steaks, too.)

The trouble is, there's no apparent scientific reason for a steak to have any significant effect on strength.

There are all sorts of theories as to why red meat, steak specifically, should make you strong or make you feel strong. Meat contains large doses of heme iron, which is typically absorbed at a rate of 7 to 35%, compared to the 2 to 20% of the non-heme iron found in plants. Without adequate supplies of iron, blood cells can't make enough hemoglobin to carry adequate supplies of oxygen to the cells. Weakness ensues.

Steak, or red meat in general, also contains appreciable amounts of vitamin B-12, which combats adrenal fatigue and ordinary fatigue. And if you eat a 2 to 3 pound steak, you'll give your body roughly 5 grams of creatine.

Then there's the testosterone connection. Meat has relatively high amounts of zinc, without which testosterone levels would wane. Likewise, steak contains arachidonic acid (AA), which plays a pivotal role in testicular steroidogenesis, the process that leads to the production of testosterone. AA is found in both the membrane phospholipids of lean red meat and in the visible fat portions. 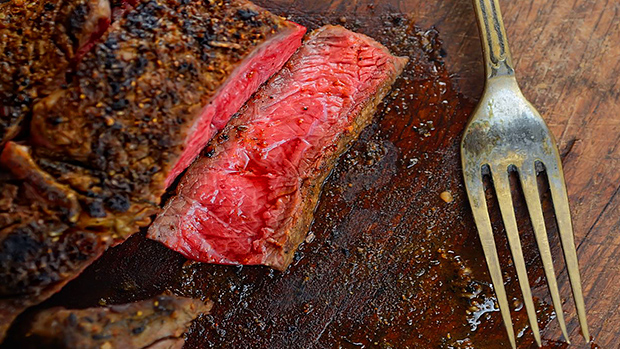 So That Explains Why Meat Makes Us Strong, Right?

Based on all those strength promotin', muscle growin', cattle herdin' properties, it's only natural to believe that steak is magic meat, but let's put everything into perspective. Sure, steak contains comparatively large amounts of iron and B-12, but not enough to single-handedly cure any deficiencies.

Besides, you could eat a handful of raisins and a bowl of Lucky Charms and be similarly fortified, and if you were really serious about getting your nutrients, you'd opt for organ meat, which is infinitely more nutritious than a steak or any other muscle meat.

As far as the creatine contained in a steak, did you catch what I wrote? You'd have to eat 2 to 3 pounds – a gargantuan 40-ounce steak, with or without a tater and all the fixins – to acquire a measly 5 grams of creatine, which you can easily (and far more cheaply) ingest by mixing a mere teaspoon of supplemental creatine in a glass of water.

It's true that red meat has among the highest concentrations of dietary zinc of any food, and zinc is required to make adequate levels of testosterone. Likewise, the AA found in steak or red meat is essential in the biochemical production of testosterone.

However, the small transient rise in testosterone you'd get from eating a steak (if it even occurs) wouldn't convey any additional strength. You need sustained levels of additional testosterone over days, weeks, and months – not hours – for it to have any effect on strength. Besides, the zinc would only help if you had a deficiency, and if you truly wanted more AA, you'd quackly go eat a duck, whose meat contains more AA that red meat.

Clearly, there's no biochemical or nutritional reason steak should make you stronger, but is there a mental reason it might?

Of Wolves and Prey

The notion that eating a steak will make you strong isn't logical, but it is primal. Eating a steak is romanticized manhood. "Real" men eat steaks.

Only that red liquid isn't blood. It's just a protein called myoglobin that turns red in the presence of oxygen. Its purpose is to transport oxygen to muscle cells. The redder a steak is, the more myoglobin it has. Any blood the meat has is microscopic and invisible, the vast majority of it having been drained out of the carcass at the slaughterhouse. So even the possible psychological power of a steak is based on misinformation.

It Would Not Be Right, to Give Up Your Steak Without a Fight

I'm well aware that in revealing steak for what it is, I've become a nutritional Grinch, but feast, feast, feast on your Who-Steak, I do not care in the least. Really, I've no bone to pick with your T-bone. Steak is of course a great source of protein and it can be part of a healthful diet, but let's not ascribe any magical qualities to it, okay?

Creatine is the most studied sports supplement in history. Here’s what we’ve learned about loading, delivery systems, and timing issues.
Diet Strategy, Nutrition & Supplements, Workout Nutrition
Chris Shugart May 30
It's high time we cleared the air regarding inflammation and all of the nasty consequences thereof. I've been preaching this stuff as an underlying theme throughout much of my writing, since first coming to T-mag (now T-Nation) a few years ago.
Feeding the Ideal Body, Nutrition & Supplements
Lonnie Lowery, PhD May 4