The concept behind commercial almond milk is great. Take some fantastic tasting, nutrient-dense nuts, pulverize them, and then add water so that you have a lactose and largely allergen-free alternative with which to soak your Fruity Pebbles.

Too bad the actual version of almond milk, at least the industrial version, holds only a whiff of the promise of the conceptual version.

Sure, almond milk manufacturers start off with some almonds, but an entire carton generally contains the amount of almonds that can be held by one tiny, arthritic and gnarled old-lady hand. This little-bitty serving of almonds is pulverized, but then the manufacturers filter out all the fiber because it would settle to the bottom and thus require that customers shake the carton and everybody knows that shaking is for losers.

Given that the number of almonds they used is so meager, manufacturers are then obliged to add in nutrients like calcium and Vitamin E so they can boast, "50% more calcium than milk," and "50% RDI of Vitamin E." Adding vitamins back in is flat-out misleading. You'd almost rather have them strap a strip of vitamin pills on the side of the carton and advise you to take one with every serving of their concoction.

Then there's the protein, or lack of it. A serving of almonds contains about 6 grams of protein, but a serving of typical almond milk contains only one gram. Now if you drank the entire carton, you'd get about 6 grams, but again that's what you'd get from a single serving of whole almonds.

Sugar's an issue, too. The "original" flavor almond milk has about 7 grams of added sugar per serving while most vanilla flavored varieties have about 16 grams of added sugar. Yeah, yeah, cow's milk has about 13 grams of sugar, too, but at least the cow put it there instead of Stanley from Akron who sometimes can't tell if the white stuff he finds in his bandana after his shift is powdered sugar or dandruff.

Manufacturers have to add thickeners like carrageenan to almond milk because when you grind up a single serving of almonds and add 32 ounces of water, it has the pale, watery, unappetizing look of goat semen. Adding it is understandable, but some of these thickeners have been implicated in gastrointestinal inflammation.

People are getting wise to these shenanigans, though. Just this past December, Blue Diamond Growers settled a class action suit with consumers who got all uppity about the company using the words "All Natural" or "Natural" on their almond milk labels when their product was anything but.

As a result of the suit, Blue Diamond can no longer use the word "natural" or the American Heart Association's "heart check mark" symbol on the cartons. They're also prohibited from using an image of two hands full of almonds on the label. Disappointingly, the settlement didn't require them to replace the image with one of two hands full of bullshit.

Here are some surprising ways drinking can wreck your physique and strength goals, plus how to have the occasional drink or two anyway without doing harm.
Alcohol Effects on Physique and Performance, Feeding the Ideal Body, Nutrition & Supplements
Joe Giandonato March 18

Got only enough room in your cupboard for five foods or supplements? What, are you renting a single-family cave in Tora Bora?
Diet Strategy, Feeding the Ideal Body, Nutrition & Supplements
T Nation December 11 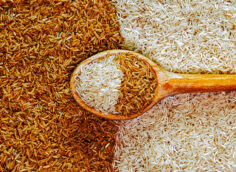 White or brown rice? How can you reduce the calories? What about arsenic? Best way to cook it? Here's how to make rice a truly healthy food.
Feeding the Ideal Body, Nutrition & Supplements
TC Luoma October 11