The Mystique of Bulgarian Training

"Bulgarian training" used to have an almost mystic aura.

It was seen as some secret training approach to get world class results in Olympic lifting. In reality, it wasn't. In fact, it was the simplest training method ever used by strength athletes!

However, in order for it to be adapted to sports like powerlifting or even bodybuilding, we need to make some modifications.

Back squats are used once in a while. This is in stark contrast with other successful schools of thought in weightlifting where many assistance lifts are used.

The competitive lifts or their variations are done at every workout, and often 2-3 daily sessions are done during periods of intense training.

This means that the athletes clean & jerk and snatch up to 12 times a week and the number of front squat sessions isn't far behind. The logic is that the more often you practice a skill, the better you become at it.

With standard Bulgarian training you work up for the maximum weight you can lift for a single rep several times a week, sometimes daily.

Elite weightlifters rarely go above 3 reps on the competitive lifts, above 5 reps for basic strength movements, and above 8 reps for assistance work.

However, in the original Bulgarian system, this practice was taken to extreme with most sets being done for 1 or 2 reps with only the occasional 3-rep set.

Elite athletes in all sports fragment their daily training volume into more than one daily session, but the original Bulgarian system took this to the extreme.

Practicing the same lifts every day: or multiple times a day: is the best way to become technically efficient.

Strength-skill work is great if you want to become good at a specific movement, but it's not the best way to build overall strength, and the "strength" built via strength-skill work can be lost much more quickly than strength built via volume and a greater number of exercises.

Still, if all you care about is being good at the snatch, clean & jerk, and front squat, going heavy every day: can work.

You have several things to think about when planning your training: volume (sets & reps), exercise selection, intensity (as a percentage of your max), frequency of doing each lift, training split, etc.

The Bulgarian system makes this process much simpler since you don't have to worry about exercise selection (you do the same three lifts over and over), training split, intensity (you pretty much always go to your maximum possible effort on a given day), reps (it's always 1, 2 and sometimes 3), or sets (you're working up toward your max, so the number of sets take care of themselves).

It throws the "paralysis by analysis" phenomenon out of the window.

3 It makes your balls grow

Bulgarian training is basically "brainless," but for it to work you must be able to give it all you've got day: in and day: out, even if you don't feel rested or strong. It also has you make maximum attempts often so you stop being afraid of doing maxes.

Many lifters have great technique up to 85 or even 90% of their max, but as soon as they start being intimidated by a weight, they lose their "balls" and their technique goes down the crapper. The more often you lift heavy, the more natural it feels and the less it affects you.

4 It teaches you to feel your body

When you test yourself every day: you learn to know when your body is up to performing. You develop a much more acute sense of knowing when you can really go at it or when you don't have it. This is an important tool to develop when using autoregulatory training.

1 It can lead to bad habits

Motor learning is all about frequency of practice. Practicing the same lifts over and over will make those lifts more automatic. This is a huge pro if you practice the proper technique.

But if you practice an incorrect movement or make the same technical mistake every time you do a snatch or clean & jerk, you then ingrain that mistake. It becomes much harder to correct.

Furthermore, when you're going for your maximum, chances are that you'll suffer some degradation in technique, and if go for your daily max until you miss every day: you can develop some flaws that will become hard to fix.

4 It can get boring

Remember that international level weightlifters in East European and Asian countries are essentially state workers. They are paid to train. It's no different to them than a factory worker doing the same job eight hours per day.

So it really doesn't matter to them if it's boring or not. It's their job and they see it as such. But for us it's our chosen hobby. Sure we want to be the best we can, but enjoying what we do is also a big part of it. Most of us need some variety to maintain our motivation.

3 It's harder to correct weaknesses

When your snatch fails to improve (for example), it isn't always because you have a problem with the snatch itself. As such, doing more snatches isn't often the answer.

You might need to strengthen some muscles or body function/movement pattern. You might need to practice only a specific portion of the full lift. If all you do are snatches, cleans, jerks, and squats, it becomes almost impossible to correct weak links.

If you're a competitive weightlifter and plan to go to the Olympics, it probably doesn't matter much to you what you look like.

Alexeyev, a Russian lifter with a huge belly, once said that he looked that way because it helped him lift more weight and that he would worry about how he looks when he stops competing.

Very few elite weightlifters actually look muscular. There are exceptions (Lu Xiaojun, Klokov, etc.), but most don't look much more muscular than the average guy you see in the gym.

I love doing sets of 1 or 2 reps, but honestly this practice won't build a lot of muscle by itself. If that is all you ever do, especially if you limit your exercise selection, you aren't likely to build a muscular physique unless you're genetically blessed.

5 It's very hard on the nervous system

Although it's not metabolically demanding because of the low mechanical workload, working up to a 1 rep max is very draining emotionally and neurologically. It can even affect the hormonal system (the adrenal glands especially) over time.

People have recently been saying that "CNS fatigue" isn't real. Well maybe it is or maybe it isn't, but something is definitely going on when you work up to your max frequently.

Doing the original Bulgarian system is pretty much a full-time job. If you have an actual full-time job, it will be hard to do both.

The cornerstone principles of the Bulgarian system are solid:

But the Bulgarian system isn't optimal for most lifters. It can work for the genetically-gifted lifter whose technique is already solid. However, most of us need more variability to sustain progression, not only to keep motivation high, but to strengthen weaker links in the chain.

Now, you can use a Bulgarian-ish system to build strength, regardless of whether you're interested in improving your Olympic lifts, your powerlifts, or just getting strong overall. You could also adapt many of these principles when training mainly to build muscle.

Modifications, however, would be necessary:

I work in 3-week cycles. During those three weeks I pick a single variation of the lifts I want to improve and I do them 4 days a week. I do the actual "competition" lift on another day. After a 3-week cycle, I change the main exercises.

3 Planned intensity variation during the week.

The main principle behind the Bulgarian system is doing a maximum effort frequently. But for most people, it's unrealistic to go for a max almost every day. Working to a max twice a week, however, is sufficient for maximum results. On the other days the planned intensity will be between 70 and 90% of the maximum reached that week. This will allow for better long-term progression.

In an ideal world, any serious lifter would split his daily volume into two sessions. This improves the quality of the work because most of the work is done in a fresher and more focused state. It also leads to greater physiological and neurological adaptation. Unfortunately, it's an unrealistic way to train for most people.

5 The inclusion of a small amount of "bodybuilding" work.

It's necessary to take corrective measures to fix a muscle that's lagging or that isn't properly stimulated by the three main lifts you selected. This is important both for maximum performance and injury prevention.

Here's a 12-week cycle designed to maximize performance in the powerlifts – squat, bench press, deadlift. It uses the principles of Bulgarian training but is modified to encompass the reality of the natural trainee with a full-time job.

All exercises are the same. "D" remains the same. Here are the differences for the A, B and C exercises:

Again, all exercises are the same and "D" remains the same. A, B, and C differences:

All exercises are the same. "D" remains the same. Here are the differences for the A, B and C exercises:

All exercises are the same and "D" remains the same. A, B, and C differences:

All exercises are the same. "D" remains the same. The differences for the A, B and C:

All exercises are the same and "D" remains the same. A, B, and C differences:

All exercises are the same. "D" remains the same. A, B and C differences:

Again, all exercises are the same and "D" remains the same. A, B and C differences:

You would then deload for a week and test your maxes in a competition.

This cycle is general. These exercises fit most people, but ideally you should pick variations of the lifts that work on your individual weaknesses. Here are alternate exercises you could use based on where your sticking points are:

If the sticking point is below parallel:

If the sticking point is above parallel:

If the sticking point is breaking from the floor:

If the sticking point is around the knees:

If the sticking point is above the knees:

If the sticking point is off the chest:

If the sticking point is around mid-range:

If the sticking point is at lockout:

A Bulgarian-style program is minimalist by nature. Because of the emphasis on the big lifts, you might find that some muscles are neglected.

If so, you can add isolation work to hypertrophy the neglected muscles. Do this by adding 15-20 minutes worth of isolation work at the end of the regular workouts. Add that extra work on Tuesdays and Fridays, which are the lower intensity days.

On Fridays only adding work for muscles that do not play a significant role in the main lifts because you'll be maxing out the next day. On Tuesdays you should work the muscle(s) you feel are holding you back in your main movements.

Use isolation exercises for sets of 8-12 reps for that extra work. Pump-enhancing techniques like partials, slow reps, rest/pause, double contraction and the like can also be used. 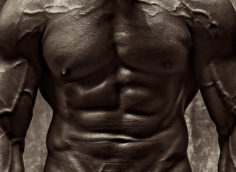 Hit the floor and train your core, lats, and delts. You'll even get some conditioning work in.
Training
Gareth Sapstead May 25

Just by changing how his training was laid out over the week, the author was able to hit new PRs and reach a whole new level of muscularity. Here's how you can too.
Bodybuilding, Powerlifting & Strength, Training
Christian Thibaudeau June 6

A summary of Coach Poliquin’s best stuff, from sets and reps to the best exercise choices for your goals.
Bodybuilding, Powerlifting & Strength, Training
T Nation March 4

Planks are pretty easy once you're beyond the newbie stage. Here's how to ramp them up.
Tips, Training
Mike Sheridan January 18