Okay Spunky, first strip down to your Power Rangers shorts. Now grab a compact from your girlfriend's purse and sashay over to the full-length mirror on the back of her bedroom door.

Face away from the full-length mirror and use the smaller mirror on her compact to eyeball your backside — your entire backside from the top of your shoulders to several clicks south of Glutesville.

Personally, I'd also use one of those cardboard boxes with a couple of pinholes in it, the kind that kids use during solar eclipses to keep from going blind, because what you see might scar you emotionally and physically.

Chances are the view back there is a mess. Chances are, in addition to having overflowing love handles that look like the jowls of a geriatric bulldog, you ain't got no meat back there.

It's human nature. What you don't see gets ignored, and the "mirror muscles," the muscles you can only see by using a mirror, are a sobering example.

Eric Cressey sees it all the time.

"A lot of lifters show up at my gym for the first time with virtually no meat on their hamstrings, glutes, and upper back," he told me on the phone last week. "And those muscles have the biggest potential for overall strength and growth! What's more, these lifters are as weak as they look."

"I just kind of expect it when someone walks into my facility," continued Eric. "I see around 70 athletes per day, many of them at the elite level. And because of their weaknesses, even the ones who think they're strong aren't gaining nearly as much muscle as they could.

"And if you hammer the muscles of the upper, middle and lower back, as well as the glutes and hamstrings, you'll not only see muscle growth there, you'll see it virtually everywhere in your body," Cressey says. "But first, these muscles need to be primed for growth by activating high-threshold motor units as often as possible and with the right volume."

Recruiting high-threshold motor units — the muscle fibers that have huge potential for building strength and size — is of course a matter of lifting heavy weights (at or above 80 percent of your 1RM).

So all we need to do is just lift some heavy weights, right?

Cressey is quick to point out: "When it comes to programming, you really have get it right. Overdo it, and you won't recover. Not enough training stimulus, and you won't gain."

"Well, how do you jack up strength and prime the muscles?" I ask. "And has your programming been effective?"

"I've got pro baseball players who come to me in the off-season," he says. "They gain muscle so quickly and look so different that the first thing people scream is 'steroids!' Really, it's all hard work and smart programming."

Cressey's Down and Dirty Strength Plan

Perform every rep with a controlled eccentric and an explosive concentric.

Go lighter in Week 4 and leave a few reps in the tank.

Pull as fast as possible with good form.

Perform every rep with a controlled eccentric and explosive concentric. Make sure to load it heavy and work one leg at a time. In other words, do 6 reps with one leg, rest 45 seconds, and then do 6 reps with the other leg.

"This stretch is great because it puts you into hip extension and knee flexion simultaneously," says Cresey. "So you're really getting at the rectus femoris, which is the main hip flexor that people have problems with."

"Hip internal rotation deficit is something a lot of people have problems with," explains Cressey. "You see it a lot with powerfliters who turn their toes out when the squat or certain athletes like hockey players. Doing this stretch will put everything back to normal and reduce lower-back pain."

* The last set in Weeks 2 and 4 should be very challenging.
Perform every rep as fast as possible using an Olympic stance (feet wider than shoulders) with good form.

Go as heavy as possible on all sets with good form.

Perform every rep with a controlled eccentric and explosive concentric. Make sure to load it heavy and work one leg at a time. In other words, do 6 reps with one leg, rest 45 seconds, and then do 6 reps with the other leg.

The first thing you'll notice about the Down and Dirty Strength Plan is the sheer amount of "posterior chain work," which is a fancy term used by snooty exercise physiologists to essentially describe the "mirror muscles." What some coaches may consider excessive, Cressey believes is necessary to stimulate high-threshold motor units.

"I'm not under the impression that you can only train these muscles once every five or six days," he says. "We're going to load it up heavy because those muscles can handle a lot of work."

But it's the way Cressey sets it up where the magic lies. Switching between maximum effort and dynamic effort movements in the same week, Cressey has successfully managed fatigue while jacking up strength and motor recruitment.

"It's something I've used a lot in my own training which really helped get my deadlift and squat up while getting some much needed muscle," he says.

But before I could swallow the program, I had a list of questions I needed answered.

Q:  Why are squats always first?

A: "People are usually wiped out after they pull [do deadlifts], regardless of whether they pull heavy or light," says Cressey. "I don't like to crush them right away because the rest of their workout would be ineffective. However, squats just don't tire you out to the same degree."

Q:  Won't putting the deadlifts second in the workout reduce their effectiveness?

A: "I used to be under the impression that if you want to get something better you absolutely have to train it first. Now I know you can make just as good or even better gains if you learn how to cycle it the right way. What you see here is that you can train something more frequently if you're not missing lifts or going to failure all the time."

A: "I picked box squats because they'll engage the hamstrings and glutes more," he says. "And the Olympic stance speed front squats are in there for quad development. Between that and the single-leg work, you'll get all the quad work you need."

Q:  What's up with the speed deadlifts?

A: "They teach you how to accelerate the bar quickly and how to move big weights long term," says Cressey.

A: "Hell no!" he says. "I'm not going to lie, man, single leg work can be intense if people push themselves. They can absolutely crush somebody. Just ask one of my athletes how sore they are after walking lunges!"

"Think about it: if you're squatting and deadlifting in the same session, you've been bilateral enough. Besides, single-leg training will give you good grip-training effect along with recruiting your traps and upper back."

A: "You've got to have a strong base and teach your body how to resist extension and rotation," says Cressey. "So, yeah, you have to work your abs. I don't think anyone really gets adequate core work from just squats and deadlifts."

A: "Maybe, but it's an integral part of the program. Muscles tend to shorten after eccentric work," says Cressey. "You have to get the length and range of motion back as soon as possible so you can enhance recovery. And the faster you recover the more time your muscle has to grow."

Time to get down and dirty

Chances are pretty good that you don't have nearly as much meat as you need on your hamstrings, glutes, and back. Hell, I know it, everybody in the gym knows it, and your mirror definitely knows it. It's time to fix it. It's time to try the Down and Dirty Strength plan.

A 3-day split that targets your legs while still allowing you to maintain size and strength in your upper body.
Legs, Training
Mike Robertson October 9 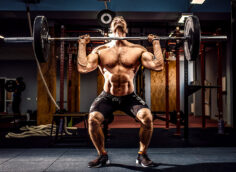 Adding plates to the bar is one way to get bigger and stronger... until it stops working. What then? Try this proven training method.
Bodybuilding, Powerlifting
Christian Thibaudeau March 14