Damn. We thought we had it covered. Eat right, sleep tight, and exercise at least 30 minutes a day most days of the week. Whether that 30 minutes of exercise consisted of aerobic activity, weight lifting, or a mixture of both didn’t matter; as long as we huffed and puffed for at least a half hour, we were supposed to be good.

That's what they told us.

Now they say we also need to stand several hours a day. Sure, it sounds ridiculous at first, but the results of a compelling new study show that standing affects the body in a positive way that's completely different from exercising.

No one thinks this is a good idea. All that literal downtime has been associated with diabetes, poor cardiovascular health, and the kind of muscle flaccidity you see in astronauts who've been marooned in space in zero gravity conditions for a year or two.

So what the scientists wanted to see was whether a single bout of daily exercise could make some withdrawals from the bad-health bank account that chronic sitters had been making deposits in for so long.

They had 61 volunteers scoot their chairs over. Some were overweight and some were healthy. Some were fat and some were slim. None exercised regularly. Each completed three separate 4-day sessions of grossly exaggerated lifestyles:

After four days of doing nothing but sitting, insulin resistance went up. So did cholesterol. The subjects also exhibited detrimental changes to the lining of their blood vessels (the endothelial cells), which could of course lead to cardiovascular change.

After the session that included four days of moderate cycling, things looked a bit better. While their insulin sensitivity or cholesterol profiles remained unchanged, the health of their endothelial cells improved.

Here comes the weird part: Four days of mixing sitting and standing or meandering around led to improved insulin sensitivity and cholesterol levels, while the health of their endothelial cells remained unchanged.

All that standing/strolling may have had more of a pronounced effect on metabolism because it increases the number of minute but significant muscular contractions made throughout the day to stay upright and moving.

Muscles that are active, even modestly so, burn sugar and thus keep insulin levels steady, and that extra activity might lead to the release of nitric oxide, which rejuvenates endothelial cells. 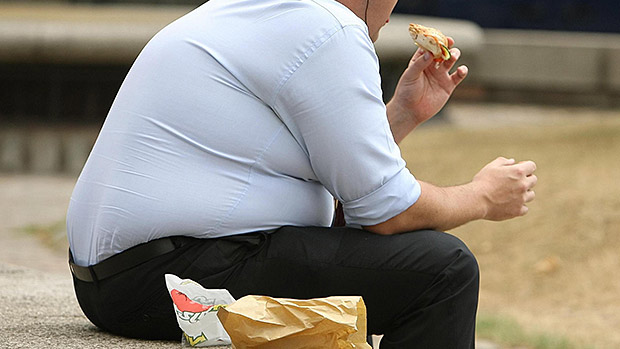 The obvious message is to unpeel your butt from your chair. Working out hard for an hour or two does not release you from this obligation. If the only time you're up and around is during your workout, you're likely missing a part of the fitness equation.

Increasing the amount of time you spend walking or standing might be easier said than done, though. If you work in an office for a mean little man with a bad toupee and a soup-stained tie, he may not take kindly to you taking long, meandering walks among the jacaranda-tree bordered boulevards near your work place. Fine. But the important thing is to get up off your chair and do something, if only for a few minutes.

For instance, get up at least once every half hour or so and whip out some single-leg Romanian deadlifts, or maybe balance on one leg with your eyes closed for as long as you can; anything that will challenge your balance and activate multiple muscle groups.

Alternately, you might buck up for one of those standing desks, annoying TV ads notwithstanding.

Mike used to like Functional Training. He used to think Mike Mentzer was kind of a bonehead. Now he's not so sure about the former or the latter, along with a whole lot of other things. If his current rate of "unlearning" continues, he soon won't know anything!
Training
Michael Boyle July 18

Listen up, Twiggy. Drop the Bruce Lee comic book you're reading and pull up a chair. You're about to get the skinny on gaining muscle.
Bodybuilding, Training
Mike Robertson September 15
Ian King is back with another of his legendary 12-week programs, this one an arm-specialization routine designed help you build a hefty pair of .44 magnums that even Dirty Harry would envy.
Training
Ian King July 14