Supersets give you an amazing pump, but the muscle damage that occurs with supersets lasts longer than regular training according to a new study, so plan them wisely.

Note: In the study below, the style of superset used was: compound exercise then isolation exercise for the same muscle group, no rest between the two.

Twenty-two active men were recruited for the study. They were then split into two groups: a superset group and a non-superset group. The workout for both groups was composed of 4 exercises (leg press, leg extension, bench press, and pec deck) for 5 sets of 8-10 reps at 85% of the subjects 10RM. Here's the breakdown for each group:

Even though the workout volume and total time was similar, supersets can drastically alter the training stimulus.

Supersets should be programmed in properly, and most likely sparingly, depending on the workout split you're using and muscle group you're working. Even though isometric torque values (force generation) rapidly returned to baseline, creatine kinase levels in the superset group were still significantly elevated five days later indicating muscle damage.

Supersets are a great tool in a lifter's arsenal, but overuse without sufficient recovery between workouts could become a problem. Plan their usage wisely.

Love the Olympic lifts but also want to look like you lift? Add these accessory moves to your plan.
Tips, Training, Weightlifting
Glenn Pendlay February 18 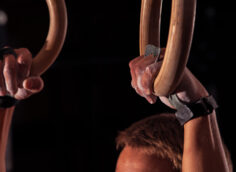 Dips build the chest and triceps. Pull-ups build the back and biceps. But this CrossFit exercise does it all. Master it like this.
Challenge Training, Exercise Coaching
Tanner Shuck December 2

Improve your conditioning, grip strength, traps and just about everything else with this tough test.
Metcon, Tips, Training
Dan John December 29

Want to learn how to build mighty legs without squats? Then it's about time you step-up!
Bodybuilding, Legs, Training
John Paul Catanzaro November 14