It's time to cut the crap about motor unit
recruitment.

Before I get to the goods, I'll define what a motor unit is, so
you know what I'm talking about. A motor unit is your motor neuron
and all the muscle fibers it innervates. Here's an illustration of
a motor unit to give you a better idea.

The key is to recruit as many of these suckers as possible with
each rep. Do that and you'll gain size and strength faster than
ever before.

Read carefully, because I'm about to give you one of the most
valuable pieces of information you'll ever learn: you can't
sustain maximum motor unit recruitment for more than 15
seconds. The neuroscience-based size principle states that
motor unit recruitment is fixed and orderly. Your smallest motor
units will always be recruited first; your largest will always be
recruited last.

This is the first place that most people get into trouble. Since
the largest motor units are recruited last, people equate that with
meaning "the end of a set." This is wrong, wrong, and more
wrong. You can recruit all of your recruitable motor units
within the first or second rep, if the load is heavy enough
and the speed is fast enough. As a gross generalization, you can
assume that the load must be 60-100% of your one repetition maximum
(1RM) to recruit all your motor units.

If you always lifted with 100% of your 1RM, you wouldn't hear me
on my soap box about lifting speed. That's because you're always
forced to recruit all your motor units when the load is your 1RM.
However, any load less than 100% of 1RM will not recruit all your
motor units unless you attempt to lift that load as quickly as
possible.

The difference between maximum lifting speed and any speed
slower than maximum is directly due to motor unit recruitment.

I'm going to bastardize some force numbers in order to break
things down as simply as possible. Imagine you're holding a
dumbbell in your hand and you're ready to perform an arm curl. You
decide to use 70% of your 1RM since you want to get around 12 reps.
Now, let's say that you've fallen victim to the slow contractions
dogma and decided to lift the load for a count of four (a four
seconds concentric). The load would move slow and it would be
easy.

Lift as fast as you can for maximum
recruitment.

But the picture gets even more interesting and telling when you
look at it closer. That 30% you neglected with your first rep? That
30% represents your biggest and strongest motor units that have the
most potential for size and strength gains! Remember, the largest
motor units are recruited last, as explained by the size principle.
Lifting slowly with any load less than 100% of your 1RM will not
recruit all of your motor units. You must make up the difference by
attempting to lift all loads as fast as possible.

Of course, some loads will still move slowly, even though
you're exerting maximum force against them. You can't make heavy loads move quickly, no matter how hard you try. So this isn't
an issue of "Waterbury says that all loads should move quickly."
Anyone who thinks that has a fundamental misunderstanding of my
methods, motor unit recruitment, and muscle physiology, not to
mention the laws of physics.

You
can't make heavy loads move quickly, no matter how hard you
try.

Speaking of muscle physiology, let's move to the next critical
point that I alluded to earlier. You can't maintain maximum motor
unit recruitment for more than 10-15 seconds, based on the
physiological limitations of your largest muscle fibers. Your
largest muscle fibers rely on the ATP-PC energy system that
supports short, powerful bursts of activity (think of a 100M race).

All you need to understand about this system is that it has a
limited energy supply and it runs out within 15 seconds. This is
why you can't lift 90% of your 1RM for 20 reps.

With that in mind, get ready for a shocker. I'm always harping
on failure training by saying it's an ineffective way to train
since it works against the size principle and muscle physiology.
However, if your sets lasts less than 15 seconds, and if you always
attempt to lift the load as fast as possible, failure training is a
very effective way to train! In fact, that's what many power
athletes do, because it works.

Since a typical HIT set involves slow contractions and sets that
last much longer than 15 seconds, I'm not a fan of the system. In
other words, it's not so much the "failure" part that disturbs me,
it's how and when the failure comes about.

Motor unit recruitment research and muscle physiology put a big
nail in the notion that 40-60 seconds of continuous muscle tension
is optimal for hypertrophy.

When I started writing articles, the dogma of hypertrophy
training was to perform 3 sets of 8-10 reps. I recommended that
lifters flip those numbers in favor of 8x3. There are two important
benefits of lower reps for hypertrophy. First, you can use a larger
load, and therefore recruit more motor units. Second, and most
important, is that lower rep sets are shorter.

A three-rep set will never take more than 15 seconds, unless you
purposely slow down the movement. The shorter the set, the greater
your potential to recruit all your motor units with each rep.

Also, when you keep the reps low your muscle pH doesn't drop
nearly as much. With higher rep sets your muscle's pH can drop
substantially. During muscle contractions, glycogen is broken down
for energy, and it releases one unit of hydrogen (H+). As you
perform more reps your body must switch over to glucose, and it
releases two units of H+.

At this point your muscle pH is dropping and your muscles are
burning. The biggest problem with acidifying your muscles is that
it limits your force-generating potential by interfering with
cross-bridge formation. Lower rep sets offset this acidification.

The Truth About Lifting Speed

I've been hemming, hawing, and hand waving about lifting speed.
But it's clear to me that I haven't been very clear. Here's hoping
the following paragraphs take up the slack.

Fatigue is an inevitable and necessary aspect of training. To
build bigger muscles you need a certain amount of it. The key is to
understand whether you're fatiguing a portion of your motor units,
or all of them. No one would argue that the latter will result in
more size and strength than the former.

And this, my friends, is the genesis of the confusion: terminate
each set once the speed slows down noticeably.

Let's say you're performing a set of squats with 80% of your
1RM. If your goal is size and strength I'll recommend a target
number of total reps for each lift. In many cases that number is
25.

So you perform your first set. If you follow my principles,
you'll terminate the set as soon as you notice the speed is slowing
down, which means that the last rep will always be the slowest in
the set. If you stop the set with the speed you start with, then
you've stopped too soon. Don't stop until you actually notice
the bar slowing down.

And you should never stop in the middle of a rep, even if you do
notice that you're slowing down. Finish the rep, then stop. Got
it?

Terminate the set as soon as the bar starts to slow, after
you've finished the rep.

My position is that if you keep pushing beyond that initial
slowing, you aren't recruiting more motor units. You slow down
because your ability to generate high levels of force has
diminished. And force is positively correlated with motor unit
recruitment.

When your speed slows down you're producing less force as a
direct result of recruiting fewer motor units. You know all those
gut-wrenching, high intensity sets with slow contractions that
result in nausea? Essentially, at the end of those sets you've
simply forced your smaller motor units to do the brunt of the work.
If the set lasts any longer than 15 seconds, the biggest motor
units have taken a break.

So doesn't it make sense to keep your lifting speed as fast as
possible?

Back to the squat example with 80% of your 1RM. With your first
set you might notice your speed slowing down at rep five, so you
stop. You rest for a specified amount of time and start your next
set. That set might result in four reps. You continue until you
reach 25 reps.

It's important to understand that each subsequent set will have
a lower top speed. In other words, you won't be able to lift as
fast on set four as you do on set one. That's fine, and that's how
it should be because some fatigue is necessary for size and
strength gains. What I'm trying to do is show you how to get the
most out of every rep of every set.

My maximum recruitment training guidelines are basically catered
to loads that allow 5-20 reps per set. Any talk of loads heavier
than a 5RM is a moot point. With, say, 90% of your 1RM very little
of this information makes any difference. Why? Because the bar will
always move slowly, and you can't get enough reps to compare the
speed to other reps.

However, you should always attempt to lift all loads as fast as
possible, even when the load is very heavy. If you do, you'll
augment the descending neural drive from your brain to your
muscles. This results in greater motor unit recruitment
(force-generating potential).

There are many other benefits to lifting as fast as possible
that I've already addressed in other articles, but I want to
mention a few more.

Second, fast tempos will train your nervous system to recruit
more motor units. There's always a reserve of motor units that,
usually, can only be recruited in life-or-death situations. But
with fast contractions, you can tap into this
reserve.

Take-Home Points (yes, there will be a
quiz)

• Each set should last less than 15 seconds.

• Perform the concentric (lifting) phase as fast as
possible.

• Terminate each set once you notice the speed is slowing
down.

• Use compound movements and focus on 25 total reps for size and
strength.

• Use compound movements and focus on 15 total reps for maximal
strength. 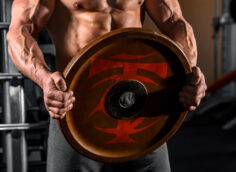