Feeling soft around the midsection? Can't see your abs anymore? Feel the need to get lean in a hurry? Slacking off on your diet and workouts can do that to you. In my case, training for an Ironman triathlon can do that, too.

What? Yeah, you heard me right. This is exactly how I felt after training for and completing in my first Ironman.

My body was soft, with no definition, and had definitely changed due to spending the majority of my training in the steady-state aerobic zone – the same "fat burning zone" many books and magazine still talk about.

I was in great shape as far as my endurance and cardiovascular system were concerned, but I had less noticeable muscle tone and didn't have the definition I was used to having in my abs and arms.

Put it this way: I didn't even want to wear a crop top at my race because I didn't have abs to show. In fact, I felt like I had rolls for the first time ever! My body had started to look like that of a flabby endurance athlete.

I'd lost some muscle and looked soft and flabby, but I was still happy with my performance and thrilled that I accomplished my goal.

All of my training was done to get ready to complete an Ironman, and all of my nutrition was eaten to fuel me for the workouts. At the time, my goal wasn't to lose fat, but I was still amazed at how little fat I lost. 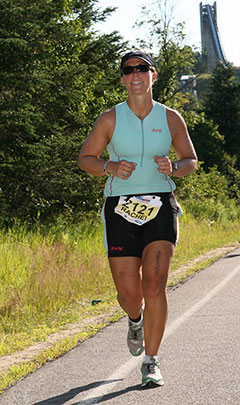 I worked my way up to doing twenty hours of endurance training a week. I also kept track of every calorie I ate, making sure my nutrition was right on track. I thought I'd be able to eat whatever I wanted, but I couldn't. I had to watch myself to keep from gaining any weight, and I still maintained about 2,000 to 2,500 calories a day.

Some of the workouts included eight or nine-hour sessions where I'd go for a 10-mile run, then jump on my bike for a 70-mile ride, and finish with another 4-mile run. I also continued to lift weights twice a week in an effort to maintain some muscle tone, but also to stay injury-free and somewhat strong.

My body quickly adapted and I was able to increase my mileage until I could go for a 16-mile run or a 112-mile bike ride like it was "just another workout." It was amazing to see how the body adapts to demands and how far you can push yourself.

Unfortunately, this was also exactly why I didn't lose much fat – my body was adapting to what I was doing. My goal was to get my body super-efficient at running 20 miles and riding a bike for 100 miles, so when it came time for my race I'd be able to do it.

However, the more your body adapts, the fewer calories you burn. So I was doing more and more exercise without burning as many calories, and therefore I wasn't losing any fat. 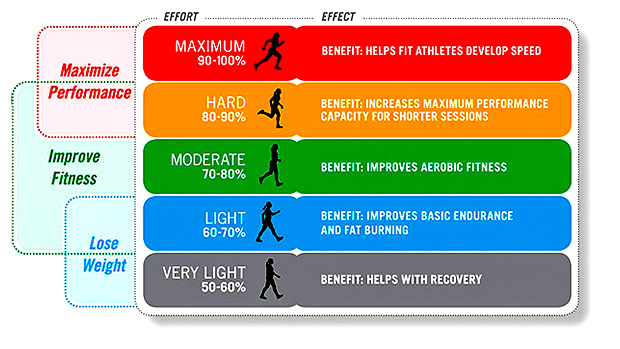 During a steady-state workout (when you move at the same pace for a certain amount of time), your body does burn a higher percentage of calories from fat. This is where that "fat-burning zone" myth comes from. On the surface, it sounds like you're burning more fat calories.

There are two big problems with this:

After seven months and 374 hours of training, I lost a grand total of 5 pounds.

I did the math and discovered that I worked out for 374 hours – that's an average of over thirteen hours a week! If I'd burned even ten calories a minute (a conservative estimate), that would've added up to 224,400 calories. So since a pound is 3,500 calories, that would mean my 224,400 calorie expenditure should've equaled 64 pounds lost!

Needless to say, I did not lose 64 pounds. Over those seven months, training an average of thirteen to fourteen hours a week, I lost all of five pounds. That. Was. It.

Sure, we know steady-state cardio is not as effective for fat loss as high-intensity interval training. We've heard the experts weigh in on this, and we've read the scientific research.

But still, you'd think all that cardio would've been more effective than this! A lousy five pounds after doing 374 hours of training, while keeping tabs on my diet! It's enough to make a girl give up the gym and take refuge in a box of Krispy Kremes.

Fortunately, I now have first-hand experience that steady-state aerobics is absolutely, completely, utterly ineffective for fat loss. After working my way up to twenty training hours a week, I can tell you that long, steady-state endurance isn't the answer for a defined, lean physique and it's a waste of time if your goal is fat loss.

It's only the answer if your goal is to complete an endurance event. 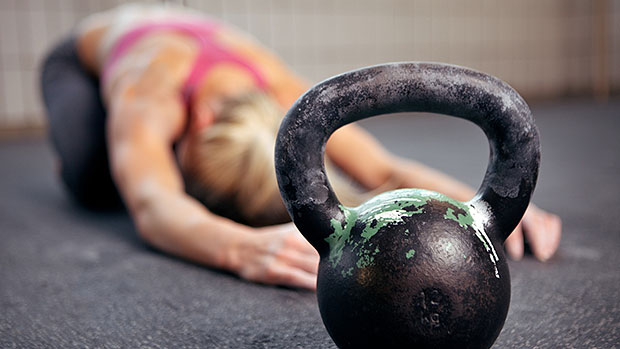 Let's review some of the research: 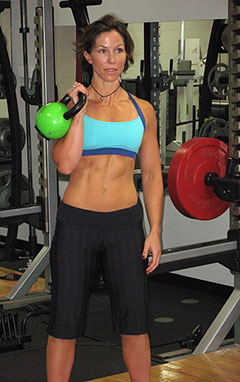 After completing my Ironman, I made fat loss my primary goal for eight weeks. I eliminated all steady-state endurance exercises. No running, biking, swimming, or anything else in the steady-state.

My workouts consisted of high intensity for short bursts, whether it was with weights or doing a metabolic interval session. I lifted weights three days a week, and I performed interval-training workouts on the other days.

I made sure the interval workouts weren't on a treadmill or a bike. I only used bodyweight-exercise circuits, along with kettlebell circuits, as my cardio workouts.

These metabolic cardio workouts would crank my heart rate up for two minutes, I'd recover, and then repeat. Doing these interval circuits, along with strength training, took up a total of five to six hours a week. Nothing like the twenty to thirty hours of Ironman training!

I dropped fifteen pounds of fat in an eight-week period and my body returned to being strong, defined, and lean. I no longer looked like a flabby endurance athlete, and I did it in a quarter of the time compared to aerobic training.

Now don't get me wrong, I still enjoy heading out for a run or a bike ride occasionally, but I don't do it for fat loss. I do it because I enjoy it. Think about it. If you do a thirty-minute walk at a steady-state, moderate pace, you'll shed about 150 calories.

If you mixed in eight 30-second sprints, you'll burn closer to 200 calories. But the biggest factor is that after an interval session, your metabolism can stay elevated for a full day and you'll end up burning two to three times the total calories you'd expect to burn from lower-intensity exercise.

Intervals can also help to reverse the aging process. Fast-twitch fibers are the first to go when we age, largely because neurons stop communicating with them. Research has shown that you can increase neuron firing rates after just one week of training. With more muscles firing, you have more energy for life.

It's time to bury the myth of using long, slow steady-state cardio to burn up fat, for good. No more spending hours and hours on a treadmill, elliptical, or bike. I've worked with many figure competitors to get them lean and defined using interval-style workouts with a full-body strength training routine, and they've had great success.

Get off the treadmill, stop spinning your wheels, and push yourself in the gym if you want to lose some serious fat.

Take it from me, I finally learned firsthand. It's time to put the last nail in the coffin of using aerobics for fat loss, bury it for good, and do some high-intensity, interval dancing on its grave.

Shoulders banged up? Take a tip from top powerlifters and use a pad to reduce the tricky part of the range of motion.
Bench Press, Chest, Exercise Coaching, Shoulders, Tips
Eirik Sandvik May 15

If your goal is to build more muscle, use this tempo prescription to get better results.
Tips, Training
Dr John Rusin May 22