Some superstitious people fear the number 13. This fear is so prevalent that building designers often leave out the number thirteen on the elevator buttons because so many people refuse to go to the thirteenth floor. Psychologists call this triskaidekaphobia which is defined in the literature as “a thing dumb folks are skeered of.”

Well, we’re not afraid of the number 13. In fact, we kinda like it. “Exercises You’ve Never Tried” is one of the longest running and most popular columns at T-Nation, and this makes the thirteenth installment! To mark this occasion, here are 13 interesting exercises you’ve probably never tried: new movements that’ll break you out of your training rut and infuse some diversity into your workouts.

Think you can perform all 13 in one week? Good luck!

We ripped this off from Charles Staley, er, we mean we learned it from Staley. (Don’t pinch ideas from people who write martial arts books, kiddies.) 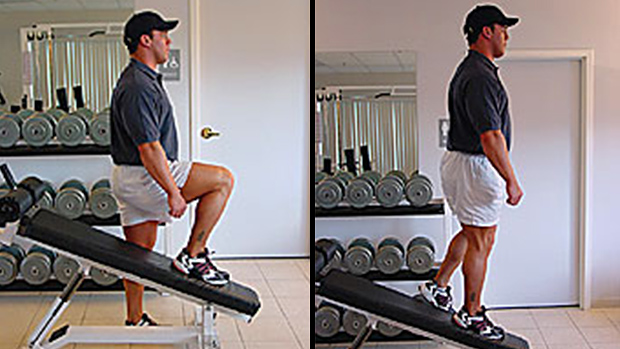 It’s performed like a regular step-up except you use a declined bench. Your toe should be about two or three inches lower than your heel. Add a barbell or hold dumbbells to increase the load. This will fry your legs and give you a dead sexy butt… Wait, did we type that out loud?

The half deadlift or rack pull builds a brutal upper back and traps! Place a bar in a power rack so that it sits just above knee level and load it up with every dang plate in the gym. Now perform just the “top” of a deadlift. Coach Christian Thibaudeau recommends that you hold for two seconds at lockout before lowering the bar back to the pins. 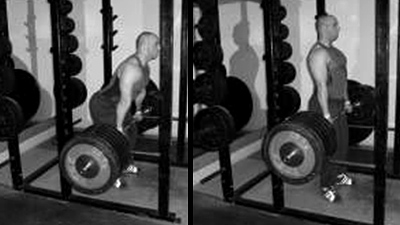 While we normally don’t recommend that you use lifting straps or hooks, break them out on the last couple of sets of this exercise so you can really focus on the heavy load. If you do it right you’ll see pretty little stars and colors swirling around your head. Groovy, man, groovy.

We learned this one from one of the gals down in the customer service department of our office. One little innocent comment about how she could “service our big customer” and smash! Right in the jewels! Okay, truthfully, this is another Staley exercise. 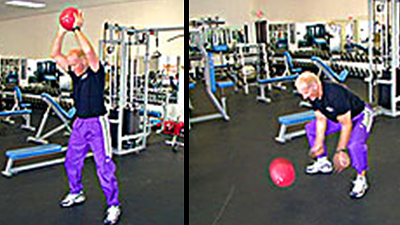 To train the rectus abdominus in a unique manner, pick up a medicine ball and hold it over your head, elbows and knees slightly flexed. Now, come up on the toes and accelerate the ball downward, attempting to burst it against the floor. If the ball has a little bounce to it, you’ll be able to catch it and smoothly continue to the next rep in one fluid motion. For greatest force production, there should be little hesitation between raising and smashing the ball downward.

This works especially well if you’ve had a bad day at work, like when the hottie in customer service smashes you in the balls in spite of your smooth lines and prodigious chest hair.

You don’t have to be a powerlifter to benefit from the unique stimulus band training provides. You also don’t have to bother with setting up two bands on a barbell bench press. Instead, try it with dumbbells and a single band. 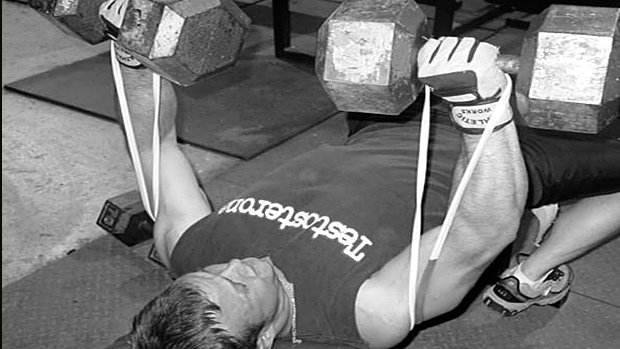 Just wrap the band around your back and grab the dumbbells. The band is held in place between your palms and the bar. This is a great trick to use to blast through loading plateaus.

Search this site for several great band training articles by Tate and Thibaudeau to learn all the benefits of band training.

This is another great exercise from Coach Staley for the abs and obliques. Start with a medicine ball between your feet, legs straight and together. Reach up and grab the ball with your left hand by executing a twisting crunch. Uncurl back down to the starting position and pass the ball to your right hand. 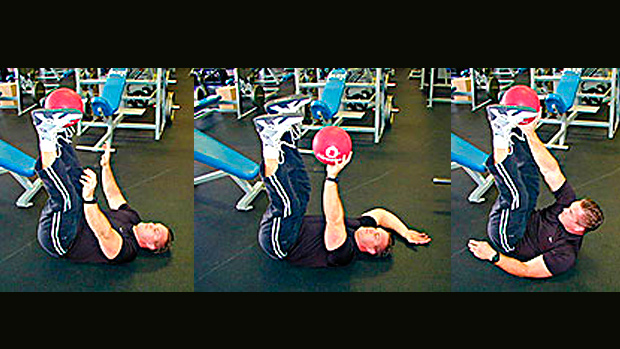 Curl back up and replace the ball between your feet with your right hand, and uncurl back down. Reach up and grab the ball with your left hand, and return to start, etc. Don’t forget to scream in pain and curse our names between sets.

Coach Davies uses this exercise to teach the power clean, but it makes a cool movement all on its own. This one requires calm execution and focus. No sissies please. 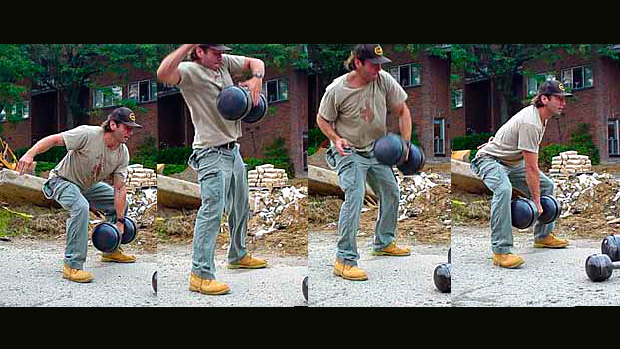 Hold a dumbbell in front of you at hip height or start from the floor position with the opposite hand behind your back. Drive the hips through and upwards, pulling the weight up. Once it drives past your waist, release the dumbbell and bring the opposite hand around to catch it as it descends.

Yes, you read that right. Yes, Coach Davies is insane.

Here’s a weird lookin’ but highly effective exercise from Dave Tate designed to torch your low back, hamstrings and glutes. 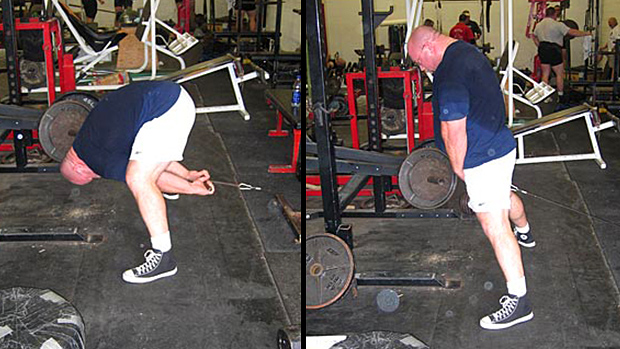 This exercise is great for your upper back. It can also act as a precursor for a newbie wanting to get started on chin-ups. Feel free to play around with the hand position and the location of your feet. Perform them with palms facing you, palms facing away, plus experiment with wide or narrow grip widths. 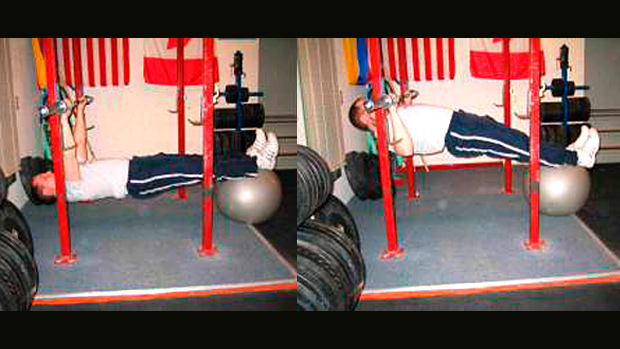 Coach Mike Robertson recommends that newbies start the exercise with the feet on the ground. As you get stronger, place your feet on a bench or Swiss ball. Advanced lifters can add a weighted vest or have a partner put plates on your chest. Being straddled by a petite college cheerleader, preferably named Tiffany or Amber, will probably work too. (Yeah, you wish.)

This isn’t so much an exercise, but rather a test of general athletic ability. According to Coach Davies, it involves proportionate strength-to-weight ratio, range of motion and coordination. 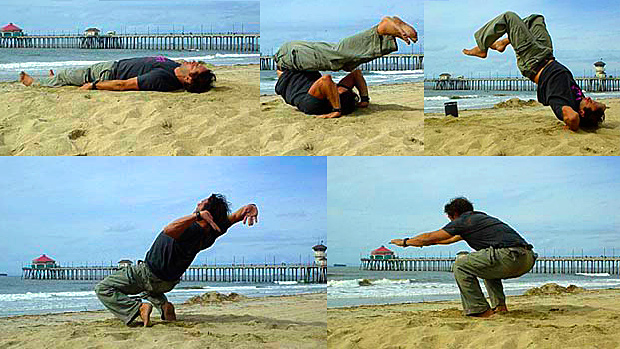 Lie flat on the ground, roll back slightly, and explode your hips and legs upwards so you land on your feet. 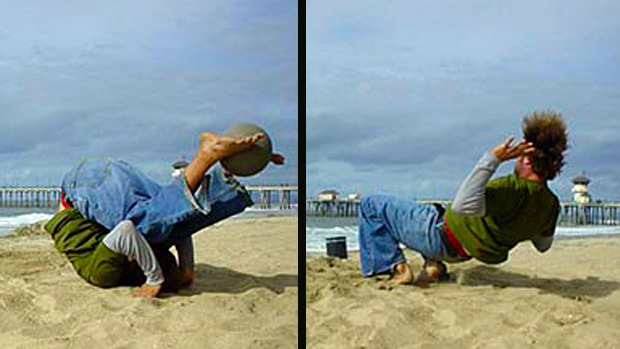 Too easy? Hold a medicine ball between your feet and throw it for distance as you come up! 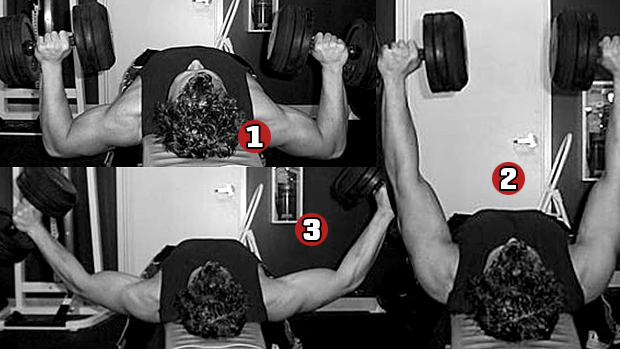 This is a Jerry Telle exercise that crosses a dumbbell press and flye. Press the dumbbells up normally. Once you reach the top, pause, then lower the weight with the eccentric motion of a dumbbell flye. Repeat the sequence on all reps: bench the weight up normally, flye it down slowly. Ouch.

This is a favorite of Louie Simmons and Charles Poliquin. It may look like a shoulder exercise but it’s excellent for packing meat on the lateral head of the triceps, the area where most lifters are lacking. A well-developed lateral head can also make you look wider. And women dig wide.

Set up an adjustable incline bench inside a power rack. Adjust the pins in the power rack so that the bar is at hairline level for the starting position. Your grip on the bar should be about shoulder-width and the elbows should be pointing outward.

Now simply press the weight up. Just make sure that you use a two to four second “dead stop” in the bottom position with the bar resting on the pins. No bouncing!

We call these “crippled” inclines because not only will you look a little physically challenged while doing them, but because they’ll also cause you to have trouble functioning in the days that follow. 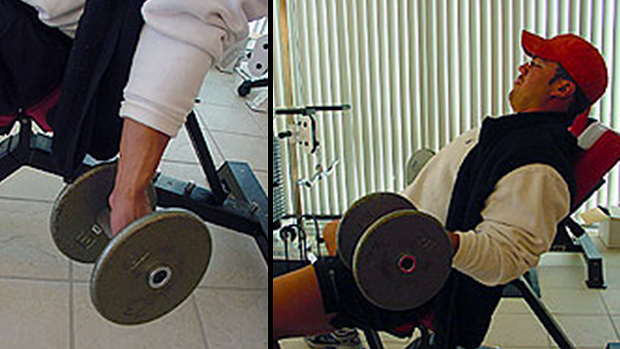 For the most part, these are done like conventional incline dumbbell curls. You just lie on an incline bench with a dumbbell in each hand. However, before you curl the weights upward, bend your wrists backward as far as they’ll go and keep them that way for the duration of the movement. This not only takes the forearm flexors out of the movement, but it also makes the movement much more difficult. You’ll undoubtedly have to use less weight.

While doing conventional incline dumbbell curls, the tendency is to have the elbow move forward during the lifting part of the motion, but that isn’t so much the case with “crippled dumbbell inclines,” which makes the exercise that much more effective.

While this exercise is good for working that all-important long head of the biceps, the bent-wrist action also tends to bring in, kicking and screaming, the brachialis.

Some people think you can’t get a great shoulder workout without weights. Well, if you have a wall then you have a great piece of shoulder training equipment. A million prisoners with big delts can’t be wrong!

Place your hands on the ground about a foot from the wall and kick up into a handstand so that your heels are on the wall. Once in place in this handstand position, lower your body down until your head is almost touching the ground, then push back up.

Toss a few of these lucky exercises into your next workout and plow through boredom and training plateaus!