Birth of the Pull-Up Challenges

There's the time-tested pull-up 3RM – still relevant and a great test of upper-body pulling strength. It's a measure that should definitely be included frequently in programming.

Then we have the pull-up to failure test. It's also a great test, giving solid feedback about upper-body relative strength and muscular endurance.

Yet only using these two tests seems a bit close-minded, doesn't it? There are only two qualities being tested. That's why I started developing pull-up challenges. The normal became mundane.

The 3RM test and the test to failure are staples that won't – and shouldn't – go anywhere, but by adding a little creativity into the mix we can set new goals, learn a little more about ourselves mentally and physically, and have some fun in the process.

Besides, facing challenges and overcoming them is what training is all about.

Warming-up for the Challenges

If you're planning on doing a pull-up challenge at the end of your workout as a finisher, then warm-up and prep isn't necessary. Of course, testing yourself at the end of the workout isn't ideal. But if you've decided to hit a challenge pre-workout or on an off-day, you'll need a bit of preparation.

How much preparation do you need? The answer is, not a lot, but there are some definite advantages you can reap by using a warm-up.

I use two methods to prep for challenges – a couple sets of heavy, weighted pull-ups or hitting some concentric pull-ups. Both methods are great for firing up the nervous system and preparing the lats, biceps, and upper-back to do some serious pulling.

Using heavy loads at an intensity near maximal effort is a tried and true method of post-activation potentiation. It's used for everything from prepping for the 225-pound bench press test to using heavy squats to aid in sprint performance. They're also a great warm-up for pull-up challenges.

Perform two or three sets of weighted pull-ups, building up to a moderately heavy set of three reps (but not a true 3RM).

The big disadvantage to the heavy set technique is that it can lead to pretest fatigue if not done carefully. Make sure to keep the set volume low and go no heavier than a set of three with a load that you could potentially get for five or six reps.

Concentric pull-ups work a little differently, but they're great to include in your general warm-up to increase pulling volume without adding additional eccentric load.

They're performed just as the name implies. Only include the concentric pull and remove the eccentric lowering phase by allowing your body to drop to a box or the floor. They can be performed explosively without inducing much fatigue.

You'll notice in the video, I keep my hands on the bar in some reps, but the descent isn't with an eccentric muscle contraction.

Try them out in cluster-rep fashion, resting about five seconds between each rep while hitting sets of three to five reps. Do three or four cluster sets.

A Working Definition of a Pull-up

Chin above the bar with limited kipping, and returning to the bottom position with your arms extended. That's all it takes.

These are challenges, so every rep isn't going to be beautiful, but limit the body English because a super kip won't cut it unless you're training for the CrossFit games.

For the clap pull-ups, your hands have to make contact off the bar. Just letting go and waving your hands wildly will only earn you awkward glances.

It's the least demanding of the five challenges, so it's a great way to ease in before trying the four nasty SOB's that lay ahead.

You've got one minute to get in as many pull-ups as possible using a pronated grip. You can take breaks, let go of the bar, call your mom and tell her you won't be home for supper; just as long as your chin gets above the bar on every rep.

This challenge can be as much about strategy as it is about measuring your testicular fortitude, so have a plan.

Hit your reps in spurts and rest before the burn takes over. That way you can stay fresh for the first 50 seconds. At the 10-second warning, turn it on and go for broke, hitting as many reps as possible. Your goal is to get at least 25 reps, and anything over 30 reps is noteworthy.

The first and hardest part of the circuit is five clap pull-ups as you can see above.

Being able to complete five clap pull-ups in a row is a challenge in itself. After they're done, transfer right into pronated pull-ups (palms facing away from you). Get those five done and switch your grip – supinate your hands for chin-ups, and finish off the last five.

This challenge only involves 15 reps, but it requires explosive power, body control, and speed. Instead of having a set time to complete the reps, you'll be racing the clock to get five reps of each variation in as quickly as you can.

Growing the 'nads to let go of the bar during the clap pull-ups is half the battle. The concentric pull-ups used during the warm-up can help you progress into the claps because they teach explosion through the pull.

Once you have the explosion part of the lift down, trust yourself to be able to let go and get your mitts back on the bar.

Though it's a race against the clock, keep the swing under control. Too much body swing will result in being out of position and can murder a great time. Pull fast, but be aware of your body position.

Your goal is to get it done in 20 seconds, anything under that and you're a beast.

The title may be reminiscent of a bad Sylvester Stallone movie, but this challenge is no joke. Picture yourself dangling from a cliff and your only chance for survival is to pull yourself up repeatedly without letting go.

That's the crux of this challenge, just keep pulling until your lats curse your name and your biceps go on strike. As soon as both hands leave the bar, the challenge is over. You're through. This challenge is great for testing your grip strength and breaking through the lactic acid threshold.

Sounds a lot like the failure test, doesn't it? I'm about to drop a wrench in the gears: You can do no more than 10 reps in a row with any given grip.

Plan on starting with a prone grip? Great, you have 10 reps until you have to flip to supinated or switch over to the neutral handles. The grips are up to you, pick two and pull.

If you can't go over 10 reps in a row at a given grip, it doesn't mean that you have to do exactly 10 reps with that grip. You can switch grips at any point before the 10-rep limit. Get more than 20 reps total before letting go and you can pat yourself on the back (if you can).

Pros in the MMA battle it out for five minutes each round, striking, blocking, guarding, and trying to sink submission holds. Dealing out an ass whooping during those five minutes while avoiding your own ass whooping takes skill, conditioning, and a plan. So will this challenge.

If you've never competed in a sport that is based on rounds, completing this challenge will open your eyes to how long five minutes really is. But before you plan on hitting 10 pull-ups at the beginning of each minute and resting for a while, notice there's one big rule for this challenge.

The Rule: At least one pull-up must be completed every 15 seconds for the whole five minutes. So if you feel like busting out those first 10 reps in a fury, realize that you'll have to have your hands back on that bar in no time.

This is where the plan comes in. Like most aspects of training, the best way to approach this challenge is to set a goal and work backwards.

Say your first go round you want to hit 40 reps – break down the time and rep combinations into a plan that will get your chin above the bar 40 times. Make sure you give yourself some extra time!

For the five minute challenge in the video, I reasoned that if I did one pull-up every five seconds, I'd hit 60 in five minutes. Unfortunately, time in your head doesn't work the same way it does in the real world, so I miscounted and only ended up with 45 reps.

So if you're planning on ripping up to the bar every five seconds, go on a four-count.

Hit more than 60 reps in five minutes and you've reached a status of strength that most she-men can only covet.

Since competition is the mother of all progress and doing 100 reps of any compound lift isn't for the faint of heart, let's kill two birds with one stone and compete by racing to 100 reps.

Grab your training partner, block out some time and scare all the shirtless CrossFit guys away from the pull-up bar.

Our race to 100 reps isn't a race in the classic definition. The first one done doesn't necessarily win the bragging rights, and this one comes with two variations. Victory will be yours in each variation by getting to 100 total reps in the fewest number of sets.

If you train push/pull with your upper-body, variation number one will fit perfectly into a training session. You and your partner will keep all your normal pushing planned for a given workout but cut out all pulling, replacing it with 100 trips above the pull-up bar.

Nothing complicated, just alternate every set of pushing with a set of pull-ups. The rest periods are up to you.

If it's a dare that you fancy, keep all your regularly planned pulling for the day and add the 100 reps on top. In that case, I suggest clearing the next day's work and training schedule and replacing it with foam rolling, couch surfing, and sympathy sex.

To make the challenge seem a bit more like a race, I added time into the mix for the second variation of the 100-rep challenge. You'll only get one-minute to recover in between sets, so plan your reps wisely. Too many reps per set and you'll burn out quickly, not enough and you'll fall behind pace.

If your first rodeo with the challenges doesn't go as planned, there's a simple way to boost your subsequent performances. Do some pull-ups! In my article Upper Back Training for Deadlifts I talked about three ways that I train pull-ups:

The total volume approach increases exposure to the same stimulus. You're going to get better at doing pull-ups because you're continually practicing pull-ups. It's also the basis of the Race to 100 Reps Challenge.

Training for max reps with your body weight is a great complement to the first two strategies. The relative strength you'll gain from the increase in your one-rep max provides those extra few reps, and the total volume work improves your pull-up skill to keep your form tight, keeping your hands on the bar for longer so you can improve your lactic tolerance.

Use all three approaches on separate days. Be sure to cycle your grips.

Lifters talk about GVT as a no-fail training plan for size. But is it? Not according to science. Here's what to do instead.
Training
Christian Thibaudeau November 25 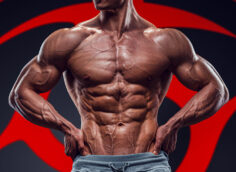