The Thibster has a special three-parter for you today. First up is a cool new exercise to help you beef up your shoulders while saving your joints.

Next, for those of you who're on the road a lot, I've got some simple, easy-to-remember tips to minimize the often-negative impact of dining out.

Finally, you may have wondered why so many powerlifters include the floor press – a barbell chest press from the floor – in their programs. You may also know that some bodybuilders (including IFBB pro Johnny Jackson) now do the floor press. I'll explain why it's a good choice for increasing size and strength, and also show you a few more exercises you can try on the floor.

I believe that the barbell power clean and press is the best shoulder-builder known to man. It hits the upper traps and every part of the shoulders, making you look yoked in no time flat.

A second limitation is that you can only use it for low reps – eight reps per set is the upper limit, and four to six reps is a more reasonable target. Beyond that, form breaks down, and you don't want to continue a set when your technique has deteriorated. It's inviting injuries.

That's why I like the seated dumbbell clean and press. It's easier to learn, making it a good exercise for lifters who don't have a coach available to help you master the barbell clean and press. And you can use higher reps – eight to 10 per set, or even 12 to 15 – when that works better with your current program.

If you've recently completed a relatively long phase of heavy overhead lifting, the seated dumbbell clean and press gives you a chance to unload with some lighter work, while still offering a good stimulus to your shoulders and traps. 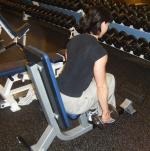 Sit on the end of a bench with your legs close together – otherwise, they'll get in your way during the pull. Your arms are hanging straight down from your shoulders, perpendicular to the floor. Hold the dumbbells with a neutral grip (aka hammer grip).

Bend forward at the hips, keeping your back in its natural arch, with your head in line with your spine – not flexed forward or hyperextended backward.

Start the pulling phase with a slight back extension to generate momentum. If you're using a bench with a back support, as shown in the pictures, you shouldn't extend so far that you reach the support.

Bring the dumbbells up to the pressing position (second photo) with two actions performed in one fluid movement: First, do an upright row, followed by an external shoulder rotation. Again, make this continuous, not two distinct movements.

In the pressing position, your hands shouldn't be any lower than your mouth.

Now you do a simple shoulder press. At the top, your hands should be in line with your ears and shoulders.

I like to use three to five sets of the seated dumbbell clean and press with fairly high reps – eight to 10 most of the time, and sometimes 12 to 15.

Tips for damage control at a restaurant

I'll be honest with you: Eating out is almost always more hazardous to your physique than preparing your own food. Unless you're dining solo, you're in a social situation. That means eating large amounts of food is often the norm.

You also have no control over how the food is cooked; the chef could be using a huge amount of cooking oil, or adding heavy sauces that are rich in both fat and sugar. Remember, the restaurant stays in business because of the taste of its food, not because of the food's health-promoting qualities. The better the food tastes, the more likely the restaurant is to get repeat customers.

The menu isn't much help. Something that would be healthy and good for your body composition if you were preparing it at home might be a caloric disaster at a restaurant. Just to pick one example, a chicken salad with dressing at a popular fast-food restaurant chain has between 550 and 660 calories, with 35 to 40 grams of fat. That's more fat than you'll get from any of the burgers it sells.

Still, there are some ways to protect your waistline. The following tips apply to sit-down restaurants, the kind with menus. If you're stuck with fast food, keep it as simple as possible: Order a couple of hamburgers or grilled chicken sandwiches plain – just meat and buns. Then toss the buns and have the meat, along with a salad (with a minimum of dressing) or some fruit, if they have it.

1. Have a meal or snack two to three hours before going to the restaurant. It's fine to go in hungry, but you want to avoid feeling ravenous before you even see the menu.

2. Avoid drinking alcohol with your meal unless you're sure you can stop at one or two glasses of wine. If you know you'll drink a lot more than that once you get started, it's best not to get started.

3. Other than a glass or two of wine, stick to water, coffee, tea or diet soft drinks – don't drink anything with calories.

4. When ordering, your best choice is probably the simplest grilled meat or fish you see on the menu. Avoid things that obviously include extra butter and oil, and absolutely avoid anything breaded, battered, or fried.

5. If the meat or fish is covered with a sauce of any kind, ask for it on the side. That way you get to decide how much of it you need – and you may decide you don't need any at all.

6. When ordering a salad, ask the waiter to bring the dressing on the side. Again, you decide how much you need.

7. If you're tempted by a pasta dish, ask the waiter if the pasta is cooked in oil. If it is, choose something else; high-glycemic carbs and tons of fat are a bad mix.

9. If you end up with butter on the table, don't add it to anything on your plate.

10. Drink a lot of water early in the meal. Then, when your food arrives, eat the veggies first. You'll fill up faster at the start of the meal, helping you avoid splurging at the end.

11. You're not at your mother's house. It's perfectly fine to leave something on your plate. The waiter won't be offended, and the chef will never know.

Follow these strategies and you'll preserve the physique you're working so hard to build.

More on the floor

The floor press – a barbell bench press that you perform without the bench – was popularized by Louie Simmons and the great lifters at Westside Barbell. It's become a staple exercise with a lot of high-level powerlifters. 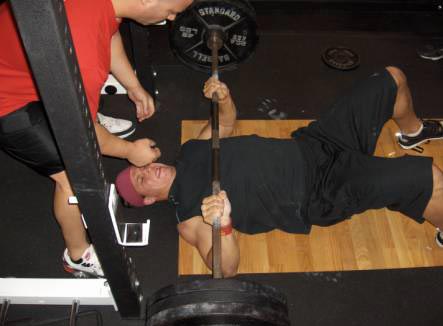 Interestingly, it's not a new exercise; it's simply been resurrected. Back before lifters had benches, the floor press was the only chest press they could perform. So it's been around for more than 100 years, making it much older than the bench press itself. 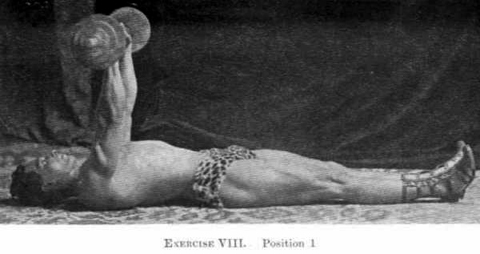 They also had a popular variation in which they'd start with the bar behind the head, pull it over, then press it up. Logically, they called the exercise a "pull-over and press-on-back." 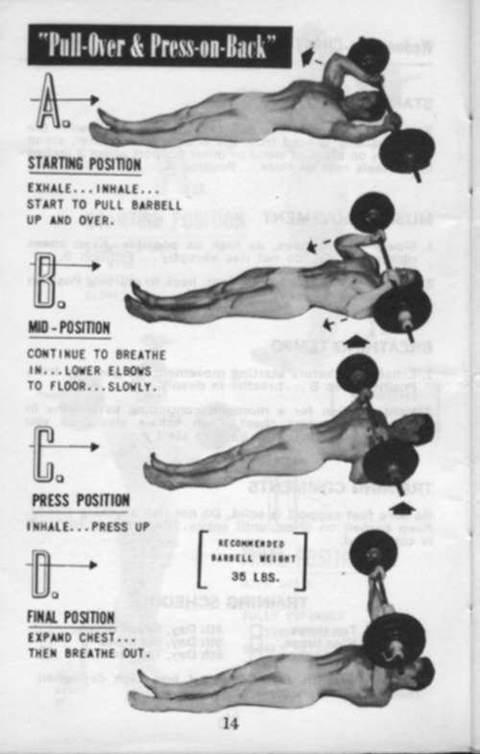 So why was it brought back to life? Because it's a very effective movement to build pure pressing strength, along with muscle mass in the chest, shoulders, triceps. To understand why it's effective, it's important to note that three factors contribute to force production when you lift a weight:

1. The actual contraction of the muscle.

2. The elasticity of the muscle tissue and the tendons. A muscle is elastic by nature. Like a rubber band, it will forcefully return to its normal length after it's been stretched. This pre-stretch contributes to force production when you lift and the muscles return to their original length.

3. The myotatic stretch reflex. A muscle has receptors called muscle spindles. Their role is to protect the muscle against tears. When that muscle becomes stretched, the spindles activate the stretch reflex, which shortens the muscle to prevent it from being torn. This contributor to force production works in concert with the elasticity of the muscle.

Pressing from the floor reduces the contribution of elasticity and the stretch reflex. If you pause with your upper arms on the floor for a second or two at the start of each rep, you can reduce the contribution of the stretch reflex by as much as 90 percent. That's why most of us will be weaker pressing from the floor than we are when we press from a bench, even though the range of motion is shorter.

But by inhibiting the stretch reflex, you rely almost entirely on the actual contraction of the muscles during a floor press. The result is a more forceful contraction, and lots of gains in size and strength. In that sense, it's the upper-body equivalent of a deadlift.

This doesn't mean that you should drop regular bench pressing in favor of the floor press. If you do, you'll lose your ability to use the stretch reflex to your advantage, which will decrease performance and increase injury risk.

You can apply the same principle to other exercises. Here are some good choices: 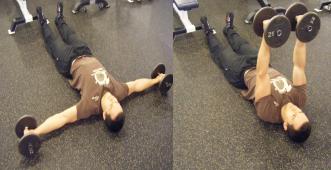 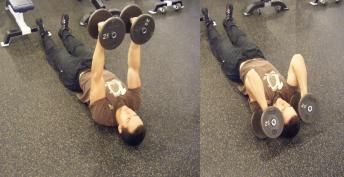 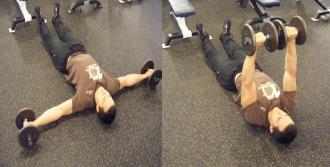 The key is to perform each rep from a dead start, minimizing the stretch reflex.

These should keep you busy for the week. See you next Monday.

This is Lucky 13, a rapid fire Q & A session with a training or nutrition expert who matters. It's fast, furious, and to the point.
Training
Chris Shugart September 29

Think you need to spend more time stretching? You don’t. Here’s how to make gains while gaining mobility.
It Hurts Fix It, Mobility, Powerlifting & Strength, Training
Dan Blewett February 15
If there's one constant in strength training, it's variety. Those who vary their programs will often make consistent progress. What's common in most programs, however, is a lack of variety!
Training
John Paul Catanzaro December 26

This might just be the easiest way to fix most ugly squat problems. And it only takes about 30 seconds. Check it out.
It Hurts Fix It, Tips, Training
Drew Murphy January 15