There are few things in life as satisfying as seeing the amount of weight you can pile onto a bar go up... until that progress stops. And then there are few things as frustrating. In fact, the only thing worse than a plateau is a long plateau. When that happens, it's time to ask some questions, starting with whether you're butting your head up against the wrong metric.

External load is a great way to quantify progress because there isn't much room for ambiguity. You throw a bunch of plates on the bar and you can move the thing or you can't. Simple. However, when loading is the only thing you focus on, other areas of your training may fall behind.

It's important to be able to identify those failing areas. More to the point, it's important to know that there's more than one way to make progress, namely by increasing volume or density.

These physiological changes likely create a buffer for imperfect movement and decrease the risk as perceived through various mechanoreceptors. In other words, the furthest reaches of your nervous system would like some assurance that what you're about to do isn't going to snap you in half. When that assurance is in place, the parking brake comes off and motor unit recruitment comes closer to true potential.

This is where additional volume comes into play. One method is Doug Hepburn's classic 8 x 2 plan. In short, you use a weight you can lift for 8 sets of 2 and stick with it until you can perform eight sets of 3. Not complicated. Not even that grueling. But definitely not easy. This approach requires a fair bit of mental discipline, especially as the length of the training session drags on. Here's the essence of it:

Another simple way to consolidate strength is to perform the following program:

Choose a weight that you can perform eight reps with. Your goal is to perform 5 sets of 5 reps. After a warm-up, your training sessions might wind up looking something like this:

Again, the load is based roughly on your 8RM. Don't change the weight until you can perform all 25 reps. At that point, you can de-load and then either re-test or simply add another 5-15 pounds.

The classic 5 x 5 training plan is gold. Bill Starr's legacy of smart programming lives on in many of the best programs out there today. Most recently, you may remember 5 x 5 from such hits as The Program I Outlined Three Seconds Ago.

However, you shouldn't start the training process that way. Over the years, we've seen a lot of guys who come in after stalling on one variation of 5 x 5 or another. The system itself is great but a certain baseline of strength and structural integrity has to be in place before it becomes productive.

While this issue can be addressed fairly simply with some higher-rep work, this isn't a guarantee. Strength may actually be less of a factor than recovery. That means that the aerobic system might be lagging behind and needs further development.

I realize that this is sacrilege. Generations of hard-gainers have been told not to burn any more calories than absolutely necessary and aerobic training has been a dirty word to many for a long time. However, every person has a particular dosage requirement for training to be effective. If they're unable to meet that dosage, they just won't get bigger or stronger.

For example, one set of three reps at 90% of your max may make you feel like the king of the world. However, if you're the type of person that adapts best to 30 reps at 80%, 3 reps at 90% is a long way off from the minimum effective dose. No matter how you break those 30 reps down (10 sets of three, 6 sets of five... whatever), you need to hit those numbers without stretching your session out to absurd lengths or openly weeping in discomfort.

That being said, a well-developed aerobic system gives you a strong enough waste-management system to shuttle out metabolites, shuttle in nutrients, and generally keep you looking sharp after even modest rest periods. The metabolic cost of developing this system is worth it. Besides, if you don't know how to squeeze another 200 calories into your day to compensate for extra energy expenditure, you should be eating a sandwich, not nitpicking the details of a hypertrophy program.

Here's another example of why general aerobic qualities might be important: If you're the kind of person who requires the brutality of regular 20-rep squat sets to move forward, anything that helps you get the job done is welcome. Not passing out mid-set is one of those things. That's where an efficient aerobic system comes in. 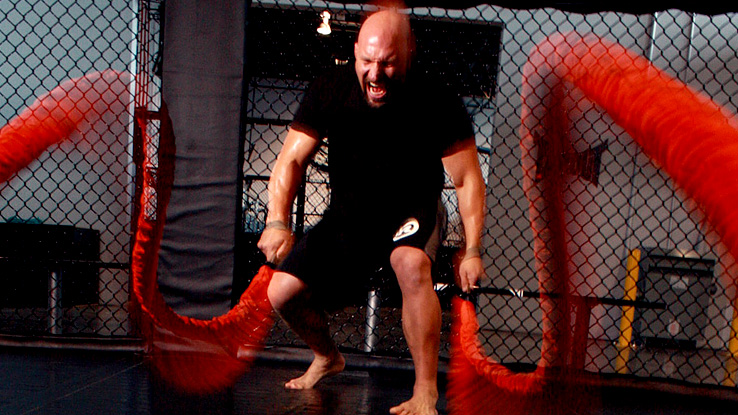 Fortunately, there's a way to combine strength and aerobic development. To work these goals in parallel, you have to be willing to let go of body-part splits and get ready to make every training session full-body; not in the way you might think, though. You might call this upper or lower-body emphasis. Everything gets worked, but not in the same way.

When we talk about consolidating strength with volume, we're talking about open-ended time parameters. In other words, you take the time you need to recover properly and get the job done. The downside to this is that sessions can run pretty long. Switching the target over to the amount of work done over a fixed period makes the program density-based. Do what you can with the time you've got. A pretty good philosophy, actually.

Charles Staley's Escalating Density Training (EDT) is arguably the best-known density based protocol out there. Pick two exercises, such as curls and triceps push-downs, put 20 minutes on the clock, and get through as many reps of each as you can. Don't pause when you're tired; just switch to the other movement. Watch your buffering abilities shoot through the roof.

To pursue more general qualities, we can open up this type of format into what I call hybrid density. We still use pre-determined time intervals, but we combine strength work, aerobic work, and core stability work.

Now, adding a time constraint can hold back strength development for some due to incomplete rest periods. However, the same approach can expose the limitations of aerobic fitness for many others. Again, this isn't aerobic fitness for its own sake but for the greater good of strength. Once you've brought up your recovery abilities, it will be far easier to up total training volume.

Loading is only really important for the first (strength) exercise. Even though we're not really talking about weights or percentages of 1RM here, we can bend this rule a bit to get a ballpark of 75-80% of your max. Once that's been established, the loading will stay the same for the entire training cycle.

The rep reserve refers to how many reps you have left in the tank. The goal is to always leave the same buffer. As soon as you're about three reps away from failure, you move on to the next exercise. The number of reps it takes to get you there is 100% subjective. There are times where you'll only hit three or four reps in a set and other times where you bang out more than you thought possible.

The concept of a reserve can also be applied to the aerobic component of the training. In this case, however, you'll use time instead of a fixed number of reps. For example, if you have 30 seconds of work with a 30-second reserve, you'll chose a level of intensity that you can see yourself maintaining for about 60 seconds. In this case, however, the work period will remain consistent but the output will vary.

Since loading will be consistent, you'll measure progress by adding up the total number of reps in the first exercise (for all sets) and trying to beat that number the next time.

Last Piece of the Puzzle

If you quickly get stronger, you'll know that volume or density was the piece of the puzzle that was holding you back. Conceptually, this is simple stuff but that doesn't mean it isn't frequently ignored in the pursuit of progressively heavier weight. Put the load on hold and go after an alternative metric. When it's time to test things out, you're likely to find that you're ready to up the weight on the bar as well.

There are two correct ways to do this exercise, then there's the way most people do it. Know the difference.
Abs, Tips, Training
Pieter van der Linde December 15

Eccentric training, especially when you “accentuate” it by strategic means, is the best kept secret to hypertrophy and strength.
Bodybuilding, Training
Bob Thompson August 6