Lifters who prize strength know their totals. They know the total amount of weight they can move for what they deem the most important lifts.

The powerlifting total is the total amount of weight you can lift for the squat, bench, and deadlift. And a few years ago, CrossFit introduced their own total, which is basically the same except instead of bench press they use the overhead press.

Though CrossFit's total tests strength and requires some athletic ability, power production, and speed, they picked the wrong exercises. They should have picked ones that require and develop more overall athletic ability than powerlifting, and more muscle and strength than weightlifting.

Weightlifting is the test of strength that's contested in the Olympic games and has been for over 100 years. Weightlifters compete in the snatch and clean & jerk, two movements that require speed and flexibility as well as strength. Whoever has the highest combined total between the two movements wins.

Weightlifters develop strength, but modern technique puts a premium on other qualities like flexibility and technical mastery of the lifts. Modern weightlifting also doesn't tend to develop a lot of muscle mass in most lifters. As Louie Simmons said, if a weightlifter was on trial for lifting weights, the judge would dismiss the charges for lack of evidence.

The sport of powerlifting started about 50 years ago and was promoted as a more accessible contest of strength, one that didn't require the flexibility and athleticism that weightlifting did. Powerlifters compete in the squat, bench press, and deadlift, with whoever has the highest combined total winning.

Powerlifting does build more muscle than weightlifting; anyone who looks at the top athletes can see that. These are very strong athletes who also LOOK strong. But despite the name, powerlifting doesn't require or develop overall power and athleticism.

What We Need: The Pendlay Total

If it didn't require the amount of technical proficiency as weightlifting, that would also be a plus. Ideally this new contest would borrow the best parts of both weightlifting and powerlifting and combine them in a way that makes it better than either as a demonstration of overall athletic ability.

Here's what I suggest:

Weightlifters and powerlifters alike have hailed the squat as the king of exercises. It's probably the only exercise that athletes and coaches in both iron sports can agree on. It's also considered the greatest builder of muscular bodyweight and athletic ability, so it has to be the first exercise on the list.

It's the one thing that almost everyone has done at one time or another, even if it was only high school gym class or high school football. The power clean is almost universally thought of as "the athlete's lift."

For many who lift, the power clean is the only experience they've had with an exercise that has to be done fast. It's also a great back developer and the least technically demanding of the three weightlifting movements (clean, jerk, and snatch).

It's a safer and more easily judged version of the press, which was a favorite of American lifters before it was dropped from the Olympic program in 1972. The only difference is allowing a dip and drive with the legs instead of allowing the extreme layback which was dangerous for the back. The muscles used are similar, the movement and range of motions are similar, even the amount of weight used is similar.

The Standards for Each Lift

These are three exercises that demonstrate whole body strength and power. They also build it. Rules and judging standards are easy to find.

The squat is one of the competitive movements in powerlifting, and I'd propose adopting the IPF rules for RAW division.

The clean is the first part of the clean and jerk exercise in weightlifting. I'd propose keeping the rules the same (they already allow either full cleans or the power version) but not requiring the jerk afterwards. When the bar has been raised cleanly from the floor to the shoulders and the lifter is standing erect, the lift is over.

The push press would be taken off stands like the squat and the rules would be similar to the old rules for the press, with the exception of allowing a leg drive to start the lift. This would make it a more powerful lift and eliminate the judging problems that plagued the Olympic press. It would also eliminate the danger or advantage of the extreme layback position.

For lack of a better name, I call it the Pendlay total. This is the total a football coach would want to build in his star halfback or linebacker.

Where Do You Rank?

So what's a good Pendlay total? Here's what some of my athletes have totaled.

There are undoubtedly lifters who can do more, and of course lots who do less. Where do you rank? 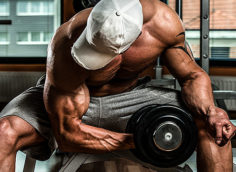 One way to make an exercise more challenging is to increase the range of motion. Here's an example.
Exercise Coaching, Glutes, Legs, Tips
Eric Cressey March 31 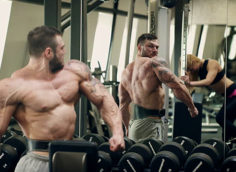