The squat is one of the blessed few exercises that everyone, regardless of training orientation, seems to agree is a great training option.

Strength enthusiasts squat to improve force production, bodybuilders squat to build massive legs, the functional folks squat to improve performance of everyday activities, and the physical therapists use the squat as an assessment and rehabilitation exercise.

In this article, I’ll share the top 7 squat tips that have helped our team at Performance U get better results with all our clients, from Pros to Joes.

1. Finding the Best Squat Stance for You.

Coaches like to argue for or against different squat stances. While a good strength training argument is always fun (in small doses), what’s really important is finding the squat stance(s) that work best for you.

In other words, don’t believe in a one-size-fits all approach to squatting, or any other exercise for that matter.

Here’s a quick and easy squat assessment from hip rehab expert Phil Malloy, which we use to help find clients’ safest and most comfortable foot position based on their specific hip structure and function.

To expand a bit on what Dr. Malloy briefly mentioned in the video about “over-coverage” and “under-coverage” in the hips:

Also, keep in mind that Dr. Malloy doesn’t try to fix, rehab, adjust or correct the squat movement pattern in any of his patients without first getting an X-ray to find out what’s going on inside.

This makes sense because if you move in a way that goes beyond (or against) your body’s structure, you’re likely to get hurt – another reason to not get too preoccupied with a specific (predetermined) type of squat movement pattern. 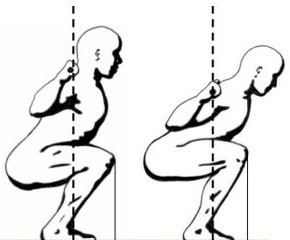 As you can see in the image to the left, bar placement can affect the force angles and postures involved in the barbell back squat.

When individualizing programs, bar position depends on the ability and goals of the specific client or athlete we’re working with.

We use the high-bar squat position…

We use the low-bar squat position…

In our experience, both back squat bar placement methods can be considered “back-friendly,” it just depends on the situation.

However, when working with someone with no limitations, we may alternate bar placement with each consecutive squat workout to create training variety and change the force vectors involved within the same movement pattern.

We’ve found when working with bodybuilders, figure athletes, and performance athletes, adding in a calf raise after every squat rep is a small tweak that can make a big change to the intensity of their squat workouts through more lower-body muscle involvement.

This simple tweak can also increase the eccentric aspect of the squat, provided the athlete is able to lower in one smooth motion as in the video below.

As covered in my article Midrange Partials for the Best Pump of Your Life, basic physiology tells us that, “Muscles have the lowest potential to generate force when they’re either fully elongated (stretched) or fully shortened (contracted).

They generate the highest possible force in the middle – halfway through the range of motion. The more force you generate in this midrange, the more motor units you recruit.”

The 1-1/2 rep system takes advantage of this by using mid-range partial reps in conjunction with full range reps.

We use two primary methods to help our clients get stronger and improve performance. One is physiological (hardware) based, which means putting on muscle size (hypertrophy). The other is through neural (software) based training. Contrast training gives us both methods in one comprehensive training method.

As I covered in this article, contrast training involves starting with a heavy lift and immediately following it with an unloaded explosive exercise using the same (or similar) movement pattern.

Here’s our favorite way to use contrast training for squats:

For physique athletes. We use contrast training to increase intensity and add training variety. Perform 3-4 sets of 6-10 reps of the strength exercise followed by another 6-8 reps of the equivalent explosive exercise.

For performance athletes. Since our focus with this population is less on volume and more on intensity (i.e. force production) perform 4-6 sets of 3-5 reps of the strength exercise followed by another 3-5 reps of the equivalent explosive exercise.

I learned the basic 7/4/7-workout protocol from coach Robert Taylor, the owner of Smarter Team Training, who uses it with the elite athletes he trains. He learned it from longtime NFL strength coach Mark Asanovich who was head strength and conditioning coach for the Tampa Bay Buccaneers.

Although this may be new to you, rest assured it’s been battle-tested and proven effective with some great athletes.

Here’s coach Rob Taylor discussing the basic 7/4/7 system and demonstrating how you can use it with virtually any strength exercise:

The Performance U – Hybrid 7/4/7 Squat Protocols

When looking to add some volume to our squat workouts, we often use two hybrid 7/4/7 squat protocols, which we developed to take the original 7/4/7 idea a step further.

Perform 7 front squats, then 4 squat jumps (as high as you can go), then 7 back squats + calf raise, all using the same weight.

This is a great squat protocol for increasing power-endurance in the lower-body.

We’ll also mix up the order a bit by performing:

For performance athletes. We use 7/4/7 squats to add volume and create a major pump (i.e. cellular swelling), which can help spark new hypertrophy.

For performance athletes. We use 7/4/7 squats to help increase stamina by building power-endurance.

Here’s some interesting research done by Dr. Mark McKean on the gender differences between how men and women move when squatting.

It’s as if the load tends to optimize their patterns by either allowing the muscles and fascia to be stretched by the load, or with stronger, stiffer muscles the extra load provides equal tension and improves coordination.

This doesn’t mean that when a male squats poorly the answer is to go and load up his squat weight; just be aware that the difference between unloaded and loaded squats will look more different in males than in females.

When teaching men and women to squat I still go with the overall strategy of good squatting practice, but I’m also aware that the genders will correct and adjust position differently. The big indicator for gender differences is the knee angles and subsequent trunk position. If you keep an eye on this you’ll see what I mean.

I’ve covered a bit of everything on squats, from movement assessments, to new rep schemes, to exercise variations, to gender differences.

I want to leave you with one more recommendation, from Dr. McKean on common mistakes coaches make when coaching the squat:

“Coach for an improved pattern rather than a predetermined pattern or a one-size-fits-all approach. There’s no best way to squat if you refer to specifics such as joint angles, or feet position, etc., but I do believe there are ‘ideal’ strategies to teach.

“Try to avoid over teaching or over cuing. This really comes about from the way most professionals are taught, as during this process they’re told how to squat rather than how to ‘teach’ people to squat.”