Contrast training is easy to explain: Start with a set of heavy lifts, five to 10 reps, and then follow it immediately with an unloaded, explosive exercise using the same movement pattern and the same reps.

Or to make it even simpler:

The concept isn’t new – researchers have been studying it since the 1960s, and strength coaches and athletes have been employing it for at least that long – but I never run out of new applications for it. I use it at various times, and with various modifications, with all my athletes, as well as the regular folks I train.

With athletes, contrast training builds strength and power simultaneously. For non-athletes, it’s a great way to tap into high-threshold motor units for hypertrophy, or to boost the metabolism to improve body composition. And while you’re accomplishing those objectives, you’re also changing up your workout in a way that’s fun and challenging.

The key to contrast training is post-activation potentiation, or PAP. That is, the explosive capability of a muscle is enhanced after it’s been forced to perform maximal or near-maximal contractions.

Yuri Verkhoshansky, the Russian sports scientist, would describe PAP by asking you to imagine what would happen if you lifted a half-full can of water when you thought the can was full. There’d be a mismatch between your perception of the force needed to move the can, and the actual force required. The can would move twice as fast as you intended, and you can only hope someone else will clean up the mess you make.

Researchers have suggested that these mechanisms are involved in creating PAP:

Or, to keep it simple, your nervous system supercharges itself by throwing more motor units – muscle fibers and the nerves that activate them – into the job, and by taking off the brakes that would ordinarily inhibit an expression of all-out power.

Other researchers have offered even more complicated explanations, suggesting there might be hormonal or metabolic factors at work.

But none of that would matter if contrast training didn’t work to make muscles bigger, faster, and stronger, and to make bodies leaner while improving athletic performance.

The easiest to quantify is the increase in power. When you do an explosive movement right after an exercise that requires all-out strength, you teach your body to recruit more motor units for tasks like jumping, sprinting, or throwing a punch. (I use it a lot with the MMA fighters I train.)

For body comp, the rationale is a little less direct. You’re using contrast training to increase the total amount of work you do by recruiting more motor units for high-speed body-weight exercises. That offers a greater metabolic boost than you would get from straight sets of these exercises without PAP.

For hypertrophy, the obvious mechanism is the fact you’re recruiting more motor units than you ordinarily would for the power exercise that follows the strength exercise. But in my experience with athletes and clients, it works best if you increase the reps slightly on both exercises. So instead of doing five to 10 reps of the first exercise, it’s more like eight to 12. You can also do slightly higher reps of the second exercise. This takes away a bit of the “contrast” component, but it increases the “training.” That is, you’re adding more volume.

With a little creativity, you can use contrast training for any movement pattern or muscle group. Most of the time, though, I use it with these six basic, multijoint movement patterns:

You can add some load to the squat jump by wearing a weighted vest or holding a medicine ball. I’d suggest a load ranging from 10 to 20% of your body weight.

Of course, this depends on your goals, your body weight, and your training level, as well as the health of your joints. With creaky knees, obviously, you don’t want to add load to jumps. And if you’re using contrast training for fat loss, and you have a lot of fat to lose, you probably don’t need to add any external load. Just move your body weight as explosively as you can and you’ll get the results you want.

If you set up the right distance from the wall, the ball should come back to you after every throw.

You want to use a medicine ball that doesn’t bounce; otherwise, it’ll come off the wall and hit you in the back. Perform Better sells two non-bouncing balls: The heavier ones are called Dynamax, while the lighter ones are called D-Ball (I wish I was kidding).

I like using heavier med balls for this exercise, 20 pounds or more.

This is as good a place as any to acknowledge that many of you don’t train in places where you’re allowed to throw heavy objects against walls. (If I had my way, all gyms would be set up to accommodate explosive throwing exercises, but that’s a subject for a different article.) And if you train at home, where you can do anything you want to the walls, chances are you don’t have medicine balls to throw.

In those cases, you want to follow the strength movement with an exercise that uses the same muscles in the same action, allows you to move explosively, but doesn’t require a lot of skill, coordination, and precise timing. That’s because you’re going to be exhausted from the strength exercise, and you don’t want to do a high-skill exercise like an Olympic lift in that situation. (More on Olympic lifts later in this article.)

Two good choices are the broad jump and the vertical jump from a deadlift position. You make sure the movement is based on a hip-dominant action.

Again, I prefer to use the med-ball exercise – medicine balls can’t create their own momentum, since you have to pick the ball up to start each repetition. But the explosive push-up is a simple alternative.

The biggest difference is the load. The athlete shown in the videos, John Rallo, is an MMA fighter who’s naturally much stronger than he is explosive. So with him I use relatively light med balls – just 3 to 5 kilograms, or 7 to 11 pounds – to train him to move at faster speeds. That’s hard to replicate with an exercise like push-ups, in which you’re using about two-thirds of your body’s weight.

A medicine-ball slam is a lot easier to do in a gym without pissing anyone off. If you can grab an unused aerobics studio or yoga room, you can probably slam away, especially if it has a carpeted floor that muffles the sound. 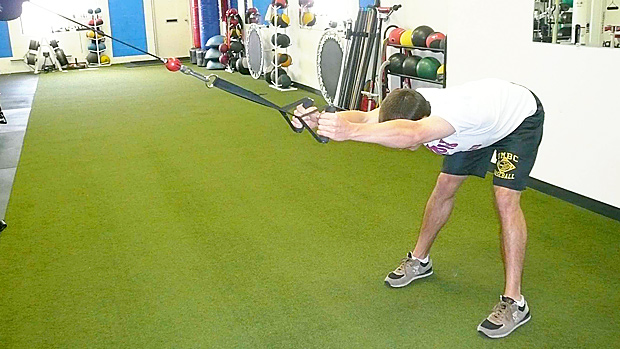 The alternative choice is the bent-over lat pull, using a cable or bands. (You can see the set-up in the photo at right.) The bent-over position prevents spinal flexion. If you use bands (which would be my first choice), go for time: as many pulls as you can do in eight to 12 seconds.

If you can’t do the medicine-ball throw (try one that’s 4 to 8 kilograms, or 9 to 18 pounds), you’ll have to use the same movement for the strength and contrast exercises. As I noted earlier, if you’re using a band for the contrast exercise, go for time – as many reps as you can do in eight to 12 seconds. 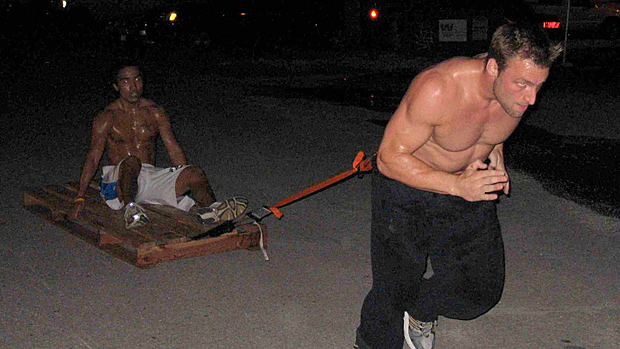 Nothing fancy here: Start with a simple exercise that involves moving forward with a heavy-ass load to carry or drag, followed by an all-out sprint.

How to Use Contrast Training

The key to making contrast training work for you is to create a genuine contrast between the two exercises you’re doing for each movement pattern. You want to use enough weight on the strength exercise to develop strength, and you want to perform the second exercise with as much explosive power as you can. Each rep of that contrast exercise should be a maximal effort.

Sets and reps: I’ve found that five to 10 reps per set of each exercise works well. Use the lower end of that rep range if you’re most interested in developing strength and explosive power, more reps if your goals include hypertrophy, strength and power endurance, and/or fat loss.

Do four to six sets of each exercise per movement pattern or muscle group.

Rest periods: Probably the biggest decision you’ll have to make, once you’ve picked the exercises and decided how to arrange them in a workout, is how much rest to take between the strength and contrast exercises, and also between pairs of exercises.

If the goal is to develop power for athletic performance, try for about 30 seconds between the strength and contrast exercises. If you’re more interested in fat loss, or in power endurance, go straight from the first exercise to the second.

Studies have shown that about three minutes of rest between pairs of exercises works best, and in my experience with athletes and clients three minutes seems about right. You can play with the rest periods to suit your own needs.

Incorporating Olympic lifts: As I said earlier, you don’t want to do high-skill exercises like cleans and snatches when your muscles are exhausted from doing a strength exercise with challenging weights.

Let me step back a moment, and acknowledge that one of the first rules of workout design is that you do power movements first, followed by strength movements, followed by higher-rep exercises for hypertrophy or fat loss or whatever. This is absolutely true if we’re talking about Olympic lifts or plyometrics. If you’re doing them, do them at the beginning of your workout, when you’re fresh.

The power exercises you’re using for contrast, however, require less skill than the strength exercises. If you have the option of using medicine-ball throws wherever you work out, you’re just throwing something heavy against a wall with a simple movement pattern.

You can actually combine the two types of power exercises in the same program. Just do the Oly lifts or plyos first in your workout, then do contrast training.

What I’ve shown here is by no means an exhaustive list of possible ways to employ contrast training for performance or physique improvement. As I said earlier, you’re only limited by your interest and creativity.

What I like most are the simplicity, safety, and versatility. You don’t want to train like this all the time, but when a program based on straight sets is starting to get stale, a few weeks of contrast training can shake you out of a rut and teach your muscles to move with new power and purpose.