I get as queasy as the next firm-testicled guy when some new age, patchouli-wearing earth mother starts talking about the calming effect of lavender or some other such oil, but some of these "aromatherapies" might actually have some merit, especially when it comes to increasing athletic performance.

For instance, there are a number of studies that have looked at the effects of mint (peppermint especially) on athletes and the results have been fairly remarkable, so much so that I've begun popping peppermint before leg workouts and mixing my own peppermint elixirs to give to some runners I know.

What the Studies Say

There have been lots of studies on the effects of inhaled peppermint, and while the plant has proven to have pain-killing and mood-enhancing effects, the effects on athletic performance have been somewhat equivocal.

That's probably why researchers at the University of Mohaghegh Ardabili decided to take a different tack. Instead of having test subjects snort the stuff, they had them drink it.

They mixed 0.05 ml of peppermint oil in 500 ml bottles of water and had 12 healthy male students drink a bottle a day for 10 days. The students were tested for various indicators of cardiovascular performance before and after drinking the peppermint mixture. It had the following effects:

All of that probably sounds sure-sure-fine, but check out the magnitude of the effects: After drinking peppermint water, time to exhaustion on a treadmill increased by about 25%, and work performance (amount of work done and amount of power exerted) increased by about 50%! Put another way, they ran a lot harder for a lot longer.

Clearly, anything that makes you breathe better is going to increase work potential, and both peppermint and spearmint have long been used as bronchodilators. However, the researchers from the University of Mohaghegh Ardabili gave us additional insights. They found that 10 days of drinking their peppermint solution led to increases in carbohydrate metabolism.

They also pointed to other peppermint studies that showed the plant decreases blood lactate levels (thereby delaying fatigue) and stimulates the central nervous system and possibly the adrenal cortex. Regardless, they felt that additional studies were needed to unravel the mechanism underlying the increases in exercise performance.

Peppermint oils are readily and cheaply available from a host of stores and internet sites (although it's unclear what potency the researchers used and what potencies are available in store-bought varieties).

You can also buy peppermint lozenges. I've been experimenting with Meltzer's brand, available through Amazon. I mixed two or three lozenges into bottles of drinking water and let them dissolve before giving them to a couple of runners. 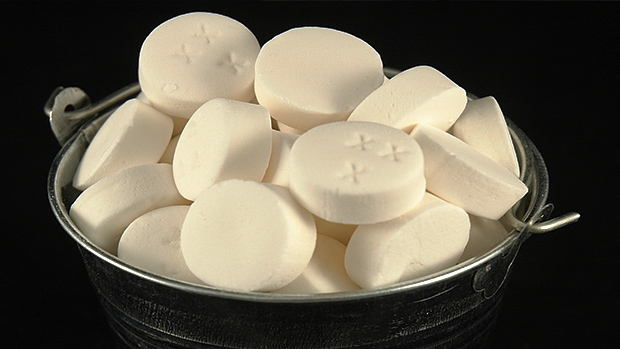 Although neither of my "test subjects" were willing to drink a bottle a day for 10 days before running again, they're fired up about it after only a few day's use, claiming the water helps them breathe easier and maintain a more constant pace.

You could also try plopping a couple of lozenges into your bottle of Surge® Workout Fuel or Plazma™, which is what I've been personally experimenting with. While I already get a significant endurance boost from those products, the peppermint seems to give me additional work capacity.

Alternately, you could simply chomp on a couple of the lozenges immediately before doing a squat or deadlift workout or a run to see how it works. Keep in mind, though, that any results seen from this lozenge protocol might just be from the bronchodilator effect, and anything beyond that might be placebo effect, especially since the test subjects in the studies drank the oil/water mixture for 10 days.

What does having a “balanced diet” really mean? And is it even ideal for bodybuilders and athletes? Dr. Lowery looks at several popular approaches.
Diet Strategy, Feeding the Ideal Body, Nutrition & Supplements
Lonnie Lowery, PhD June 28

Are you still following this old school bodybuilding advice? It's time to call out the common myths. Here's what it is and why it's wrong.
Dietary Myth Busting, Feeding the Ideal Body, Nutrition & Supplements
Jimmy Smith May 31
Last week, John Berardi, Lonnie Lowery, Cy Willson, and that annoying Jared kid from the TV commercials discussed different aspects of carbohydrate metabolism. When last we left them, they were about to start explaining the differences between individual types of carbohydrates.
Feeding the Ideal Body, Nutrition & Supplements
John Berardi, PhD October 4