Intense training activates protein synthesis, but only if the right nutrition is there to support it. If you read the article John Meadows and I wrote called Maximize Protein Synthesis, or if you've read anything that T Nation's been saying on the subject for years, you're likely familiar with the concept of "the anabolic window" and the importance of peri-workout nutrition.

What happens at the cellular level in the hours after training is predictive of long-term gains. Take advantage of this "anabolic window" and you'll grow like never before. Consistently miss it, and, well, good luck.

Getting the right macronutrients at the right times is the key, but macros are only a part of the big picture. An important yet often overlooked aspect of muscle protein synthesis is cell volume. Cell volume isn't just cosmetic; it's the main driver of amino acid transport, also working behind the scenes to turn on protein synthesis and suppress protein degradation.

A full/volumized muscle is an anabolic muscle. While we've known for over 20 years that cell swelling inhibits protein breakdown and stimulates protein synthesis in certain cells (1-3), until recently, the mechanism linking cell volume to protein synthesis was a mystery.

What we know now is that protein synthesis is controlled by the enzyme mTOR, which is activated by mechanical stress, growth factors, and leucine.

While all three of these are important for the training stimulus, mTOR signaling is also dependent on cell volume.(4) This is especially important in skeletal muscle, where cell volumization activates glycogen and protein synthesis and inhibits protein breakdown.(5, 6)

The scientific breakthrough leading to the connection between cell volume and protein synthesis occurred in 2005, when a group of scientists discovered that it takes more than just leucine to activate mTOR – glutamine is also required.(7)

This came as a surprise. Although glutamine is considered a "conditionally essential" amino acid that limits protein breakdown during severe trauma or stress, it had never been linked to mTOR activation.

Glutamine was necessary for leucine uptake and cell volumization, both of which are needed to turn on protein synthesis. The authors went on to show that cellular glutamine depletion not only results in a reduction of cell volume, but also reduces the ability of leucine to activate protein synthesis.(7)

This discovery was huge, because it provided a direct link between glutamine, cell volumization, and protein synthesis. For the first time, it was shown that glutamine is necessary for the activation of protein synthesis by leucine.

Takeaways from this study:

While this study suggested that glutamine is a very important piece of the puzzle linking cell volume and protein synthesis, the exact mechanism wasn't worked out until 2009, when Nicklin et al. discovered that glutamine export is coupled to leucine import and mTOR activation.(8)

To get leucine into the cell, there's an initial period of "glutamine loading." This also pulls in water, increasing cell volume. After the "glutamine loading" phase, glutamine is exported out of the cell in exchange for the import of leucine.

This result was important because it explained the lag time for the activation of protein synthesis by leucine in this experimental model.

Takeaways from this study:

These results finally shed some light on the cellular machinery that regulates amino acid transport, and how it's coupled to the control of protein synthesis.

This work needs to be interpreted with a degree of caution, however. An important caveat to these studies was that they were performed in vitro (i.e. in cell cultures) where regulation or protein synthesis is much simpler. Muscle cells are capable of making glutamine as-needed from other amino acids, and "glutamine depletion" in this cell culture model isn't representative of more physiological situations in vivo.

High rates of protein synthesis can't be maintained indefinitely in muscle tissue with or without glutamine supplementation. Glutamine can, however, be used to strategically support protein synthesis by optimizing cell volumization during the post-workout period. 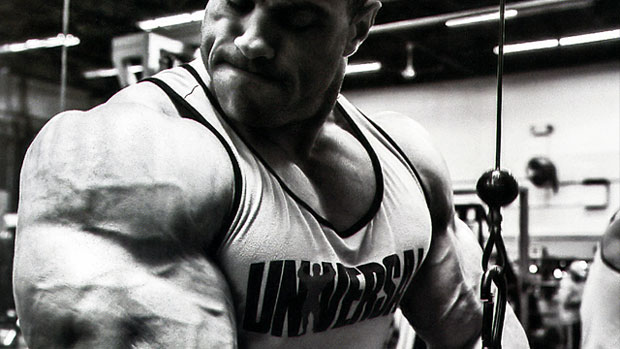 Tertiary Active Transport (TAT): How Leucine gets into the Cell

System A transporters work through a different mechanism, however, where glutamine is coupled to sodium uptake.(12, 13) The coupling between sodium uptake and System L / System A amino acid transporters is called Tertiary Active Transport (TAT for short). It's TAT that ultimately drives leucine inside the cell leading to mTOR activation and protein synthesis.(11)

You can see how TAT works in the figure below: 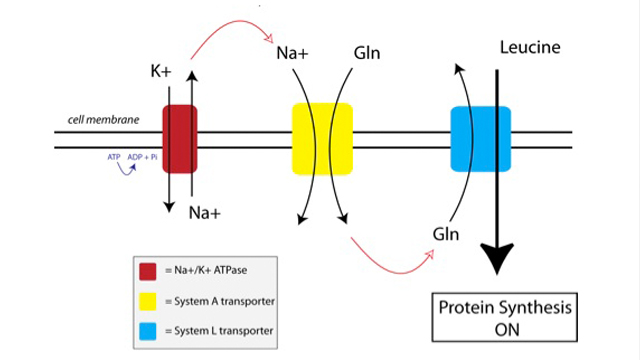 First, a membrane bound pump called the sodium-potassium ATPase pump (Na+/K+ ATPase, red in the figure above) uses energy from ATP to move sodium outside of the cell, against its concentration gradient.

The increased concentration of sodium outside of the cell is coupled to the import of glutamine by the System A transporter (yellow in the figure). Glutamine and sodium influx into the cell also pull in extra water, causing the cell to swell. This puts the cell in an anabolic state, priming the protein synthesis machinery for activation.

When glutamine builds to sufficiently high levels inside the cell, the System L transporters (blue in the figure) are activated, which shuttles glutamine outside of the cell in exchange for leucine uptake. Entry of leucine into the cell is the trigger for protein synthesis.

While this has been a great biochemistry lesson so far, the discovery of TAT isn't just important for cell biologists. Now that we know how cell volume is coupled to amino acid transport and protein synthesis, we can design several nutritional strategies to maximize the process when it counts – during the critical post-training period.

Protein synthesis is totally dependent on cell hydration – if you're even a little dehydrated the ability to recover from intense training is totally compromised. Getting plenty of water is a no-brainer here, but water alone isn't enough.

Electrolytes such as sodium, potassium, chloride, and phosphate also function as "osmolytes" because they draw water into the cell. After an intense training session, we need water, amino acids, and electrolytes to maximize the cell volumization process that drives protein synthesis.

Sodium, magnesium, calcium, potassium, phosphate, and chloride (to name a few) are all important here. At a minimal level (unless you're doing so under the advice of your physician), don't shy away from sodium pre or post-training. If you're sodium-depleted, your pump from training will be almost nonexistent, and sodium is necessary for glutamine uptake.

To eliminate the guesswork, Surge® Workout Fuel and Plazma™ are designed with ideal electrolyte ratios to support cell volume and protein synthesis.

Protein synthesis is suppressed by glutamine depletion, which has huge implications for hard training athletes. After an intense training session, an inflammatory response is mounted, which allows immune cells to traffic into thrashed muscle tissue to begin the repair/rebuilding process.(14)

Glutamine is so rapidly taken up by immune cells that it's considered the "fuel of the immune system."(15) Not surprisingly, it's been shown that intense training causes plasma glutamine depletion.(16-18)

For this reason, glutamine requirements increase in the post-workout period, where the local immune response may be competing for the availability of glutamine to prime muscle cells for amino acid uptake and protein synthesis.

Pre-loading cells with glutamine may also potentially reduce "lag-time" associated with leucine-activation of protein synthesis. If you're not doing this already, take 10-15g of glutamine or glutamine peptides immediately post-workout. Because BCAAs are another favorite substrate for muscle glutamine synthesis, and have also been shown to increase muscle glutamine production (19-21), BCAAs and leucine are also useful during the pre-workout period to help maximize endogenous glutamine production.

Editor's note: The entire Plamza/MAG-10 protocol, with it's pre-training, training, and post-training nutrition, fulfills the author's recommendations for loading the muscles with BCAAs and leucine.

Recently, it was discovered that the consumption of EAAs increases the expression of both System A and System L amino acid transporters.(9) Importantly, this happens at the "post-transcriptional level," which means at the level of protein synthesis, where existing mRNAs are translated into proteins.

Contrast this with "denovo" protein expression – where it can take 16 or more hours to synthesize, process, and transport new mRNAs – post-transcriptional activation of protein synthesis can occur in minutes to hours, allowing cells to rapidly increase the level of particular proteins when needed.

Suddenly we have more incentive to have a solid peri-workout nutrition plan in place – EAA intake during the pre-and peri workout periods pays off big post-workout by increasing the expression of amino acid transporters, priming the cell for maximum amino acid uptake and activation of protein synthesis.

Fast-absorbing protein isolates or hydrolysates such as Mag-10® Protein Pulsing Protocol™ or Plazma™ during the pre-and peri-workout periods are ideal here.

Insulin is the most anabolic hormone in the body. Along with directly activating protein synthesis, insulin also increases translocation of the System A amino acid transporters to the cell membrane.(22)

This means that insulin causes more System A transporters to be displayed on the cell membrane, ready to drive more glutamine into the cell. More glutamine leads to more cell volume, which drives more leucine into the cell, ultimately leading to more protein synthesis.

While EAAs increase the expression of AA transporters, it's the insulin signal that allows them to be displayed on the cell surface, ready to shuttle new amino acids into the cell.

This is yet another reason why pre-and peri workout carbs are a good idea unless you're in extreme fat loss mode: insulin increases the capacity for cellular amino acid transport.

Although post-workout carbs alone will increase insulin levels, combining these insulin-potentiating amino acids with carbs will supercharge your pancreas for even more insulin release. While it's good to keep insulin levels on the lower side most of the time, increased insulin levels in the peri-workout period maximizes amino acid transport, cell volume, and protein synthesis while also suppressing protein breakdown.

The type of intense anaerobic training it takes to build loads of quality muscle leads to considerable lactate production, decreasing muscle pH. This leads to early muscle fatigue and weakness, but also certain amino acid transporters, including System A, are inhibited by low pH.(13)

When muscle pH is low, amino acid uptake is reduced, which suppresses mTOR activation of protein synthesis.(24) It's also been shown that low pH inhibition of the System A amino acid transporters increases protein breakdown.(25)

This is where beta-alanine comes in. Increased muscle carnosine levels act as a natural acid buffer, extending anaerobic threshold by limiting the decrease in muscle pH from training.

Beta-alanine has another important function: to help maintain protein synthesis and get it online faster after intense training by preventing the attenuation of amino acid transport.

During intense training sessions, protein synthesis is reduced and protein degradation is activated. This is unavoidable for any hard training lifter. However, the extent to which we can minimize the catabolic effects of training and the quicker we can return to "anabolic mode" during the post- training period ultimately determines how efficiently we'll recover – and grow.

Macronutrient timing is important, but it is a means to an end. Cell volume is the main driver of amino acid transport and protein synthesis. By understanding how amino acid transport happens and how it's regulated by cell volume we can get more leucine into trashed muscle cells faster, thereby stoking the anabolic fire and ultimately leading to better gains.

The above strategies are effective, practical, and are based on the latest scientific research. Use them as a template to take your training progress to the next level.

I look forward to your questions on the LiveSpill!

No male needs to get above 12% body fat to gain muscle at an optimal rate. Seven reasons why a dirty bulk will wreck your body over the long haul.
Bodybuilding, Dietary Myth Busting, Feeding the Ideal Body, Nutrition & Supplements
John Meadows April 15