Have you ever tried conjugated linoleic acid (CLA)? If you have, chances are you experienced some disappointment – about 40 bucks worth.

Like many other gym rats, you may have forked over a day's pay for that bottle that promised so much but gave so little. I'll bet you lost almost no fat and gained a modest 2-3 pounds, if any. Sadly, the advertising promises of incredible fat loss with simultaneous muscle mass gains tempted bodybuilders everywhere but the product never seemed to pan out. I also bet TC never thought he'd set such a truckload of marketing horse crap into motion by introducing this stuff to bodybuilders! (Yes, it was, in fact T-mag's own famous [infamous?] editor who was largely responsible for getting us all interested in CLA.) Should we shoot him for that 40 bucks we blew?

Now that the marketing hype has worn off, a few people other than TC are willing to give this special type of animal fat a more objective look. There's been a renewed interest over the past six months, partly because the animal research just won't go away. It makes this stuff look like the cure-all, holy grail of health and physique improvement.

But have you ever wondered why it didn't work for you? Well, after researching CLA in athletes for three years now, I have some answers. I shared some of this during the Fat Roundtable article with John Berardi a while back, and TC also addressed some problems in his CLA Revisited article, but there's more to tell. You may be surprised that there are specific reasons why CLA didn't work the way many of us hoped – some of them correctable.

Let me share some up-to-the-minute research with you that I recently learned of at the First International Conference on CLA in Aalesund, Norway. And, for your infinite patience, I'll also throw in some weird new approaches to physique enhancement that I picked up regarding the use of never-before-seen "special lipids."

After 20 hours in the air and language barriers of every kind (I learned that "gift" means "poison" in Sweden – don't ask!), I dragged my weary butt into the conference hotel. As I staggered down to the auditorium to hang up my poster presentation, I passed every heavy hitter imaginable in the CLA and special-lipid research arena. Luckily, I was too burnt to care and was able to interact with some of them without stuttering and fawning like a teenager at a chance encounter with Brittany Spears.

Almost as soon as the sessions began the next morning (I think it was morning, the sun basically NEVER SETS in Norway this time of year!), amazing facts started to perk me up. First up, Dr. Michael Pariza, a CLA patent holder and "king" of the field, explained the "isomer paradox." What did he mean? For starters, he showed data regarding how the 9,11 isomer of CLA, not the 10,12 version, appears responsible for improving muscle growth.(1) This is interesting because the body can make a bit of 9,11 CLA on its own. Perhaps it is, in fact, a necessary "natural" factor in resistance-training hypertrophy.

Regarding body fat, the opposite appears true: only the 10,12 isomer affects fat metabolism.(1) Since the human body can't synthesize trans-10, cis-12 CLA, its intake from dietary sources (e.g. beef, dairy) appears especially important.(1) He then went on to show that 10,12 CLA has NEVER been shown to have lipolytic (fat burning) effects.

Huh? No fat loss, even in rodents? I thought rodent data on lipolysis was repeatedly referenced in sales materials! I listened closer. "You see, t-10, c-12 CLA primarily prevents lipogenesis (adipocyte filling), which is why the constantly growing rats don't become as fat as their placebo-fed counterparts." That is, rat-fat cells don't seem to enlarge in the presence of 10, 12 CLA. This is news because rats normally grow larger and fatter throughout their lifespan. The 10,12 isomer prevents this.

One mechanism involved in this was the inhibition of lipoprotein lipase (LPL), the enzyme responsible for dragging fat out of the blood and into fat cells.(1) Another was the inhibition of delta-9 desaturase, a key enzyme in lipogenesis.(1) Ahh; it was coming together now. The advertising propagandists had missed the point. Reduction of existing fatty tissue was not the effect, prevention of body fat accumulation was!

My bodybuilder's mind started to take over. The REAL application here is not to try getting ripped with CLA but rather to use it during a "bulking phase," when voracious eating would otherwise pack on some fat – just like with those little rats. I had my own data(2,3) suggesting that a 7.2 g per day dose might improve feed efficiency (more tissue gain at a given amount of food) without fat gain in college weight trainers, so I was feeling vindicated at this point.

I was sitting there, gears turning in my head, now fully awake. I have always used a 50/50 mixture of the 9,11 and 10,12 isomers in my studies, so I suppose I've been documenting the effects of two distinct compounds.

"So what?" you may ask. Well, now that it's becoming increasingly cheaper to sell the isomers separately, we may be able to get higher doses of exactly the type of isomer we want. Of course, I can't recommend doses above a few grams per day – or any dose for that matter because there's only one other guy in the world that's fed CLA to people (in controlled conditions), to my knowledge. Ergo, we currently just don't know enough about its long-term toxicity and effects in humans. Stay tuned, though.

Later in the day, an Italian woman started talking about CLA and various sulfur-containing lipids as "cell membrane thickeners." This elicited speculation that CLA was, in fact, just one of a whole new class of nutrients and drugs that act by physical modification of cell membranes. There's a type of lipid in garlic, for example, that may also have physique/ health augmenting effects. And there was conjugated linolenic acid (CLNA). It's the conjugated isomer of linolenic acid – the omega-3 good guy in flax oil, among other things.

Things were getting pretty weird and speculative at this point, but the smell of future approaches to muscle gain was definitely in the air. These folks were not salespeople or conmen; I was actually witnessing an international "nutritional physiology think tank" that was filling my head with great ideas. That large registration fee and time spent in the air to get to Norway was stinging less now.

During this same presentation, I saw in vitro ("in a dish") data revealing that the effective anti-inflammatory – and potentially anticatabolic – concentration of CLA surrounding cells must be 6-8 times the anticarcinogenic (cancer-reducing) level.(1) This is news because 3-4 grams per day, taken orally, barely reaches the small, anticarcinogenic level within the body.(1)

Truth be told, an anti-inflammatory concentration within human tissues may not even be attainable via oral consumption. Hmm. No wonder I saw nothing happen to body composition upon feeding a 3 gram per day dose to experienced lifters (unpublished observation)! It appears as though athletes wishing to affect muscle size and recovery would have to venture into expensive, high dose, uncharted territory (not recommended).

Later, when a Japanese researcher showed the fat loss data on CLNA, my interest in applying lipid physiology to athletes was officially rekindled. He was also tinkering with combinations of "regular" (mixed isomer) CLA, adding soy protein and sesamin (apparently a potent lipolytic substance) with ever-increasing results. I wish I could share more, but we'll all have to wait for confirmation of those leptin-altering, brown-fat-inducing, metabolism-boosting results.(1) I expect someone other than a research geek to get wind of these data and start marketing CLNA, garlic lipids, or sesamin in the next two years.

So what's the final synopsis on CLA after my European escapade? First, CLA certainly has promise for bodybuilders or powerlifters during a bulking phase (say, October through February). Holiday season festivities and the associated dietary binges should provide plenty of help during this "mass cycle," eh?

Second, the advent of different isomer-specific products may usher in a more "targeted" approach to CLA supplementation. Third, the necessary dose for bodybuilders and powerlifters may far exceed the cancer-fighting and heart disease-combating doses. This is not an excuse to mega-dose, however. CLA interacts with dozens of genes, with, as yet, unknown consequences. And finally, unusual dietary fats other than CLA, like CLNA and others, may make interesting additions to physique athletes' arsenals one day.

So you see, proper understanding of CLA may, after all, make it a "gift" in the American sense of the word rather than the "poison" that took your cash in the past.

When should you pack in the calories and protein? When should you have your smallest, lowest-carb meal of the day? Here's the science.
Diet Strategy, Nutrition & Supplements, Performance Proteins, Tips
Chris Shugart April 4
Two years ago my wife and I tried cyclic ketogenic dieting. We knew that many of the concepts behind these diets were valid but there was a practical, behavioral problem for us: we could no longer function as a stable, productive human beings on such low carb intakes.
Feeding the Ideal Body, Nutrition & Supplements
Lonnie Lowery, PhD January 30 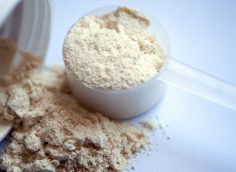