I don't know about you, but I'm not terribly interested in eating a half pound of horse flesh with cucumbers on the side every morning. This is what Christian Thibaudeau tells us he eats for breakfast, and more power to him, but seriously, sautéed slices of Seabuscuit every single day would get pretty tiresome after about the second week. Of course, that goes for just about anything.

So what do you do when you've run out of healthy food options and you're beginning to loathe your diet? Watch out, that's what. You're setting yourself up to fall way off the hard-body wagon, and once you do, it's too easy to catch the fast train going the other direction. You know the one I mean. That's right, the Man Tit Express, with non-stop service to Lardassville. So stay on the wagon, get your ass in the kitchen, and try some of these excellent beef recipes today. You really can love your food and look good naked.

Oh, and because we want to both look good naked and be healthy, the beef we're after in all these recipes is grass-fed beef. TC's written several articles about the overwhelming superiority of grass-fed beef, but let's review.

Real beef, that is to say grass-fed beef, is a bona fide health food. It's packed with high quality protein, omega-3s, and even conjugated linoleic acid (CLA). It's also low in the things that you need less of: saturated fat and omega-6s. And it's delicious.

The corn-fed crap they sell in the grocery store is not real beef. It's poison that looks and tastes sort of like beef. The problem is corn. And as you might suspect, the government is behind it.

Cattle are superbly adapted to thrive on high-cellulose foods like grass. That's why they're called herbivores ("grass eaters"). When you feed cattle a diet based on corn, soybeans, and other grains, they gets fat and sickly, just like people. The meat becomes loaded with pro-inflammatory omega-6s and saturated fat; the anti-inflammatory omega-3s are practically nonexistent.

In an actual free market economy, only an idiot would grow corn, because it costs about a dollar more to produce a bushel of corn than the corn is worth. And you can't eat debt. However, in our country, the government pays farmers to raise corn that the market doesn't want. These subsidies have created a vast surplus of corn, which is sold to feedlots and force-fed to obese couch-potato cows.

It takes about 16 pounds of corn and soy to make just onepound of grain-fed beef. Multiply that by the thousands of tons of grain fed beef produced annually in this country. Under normal supply and demand, corn-fed beef wouldn't exist: it's only possible (by which we mean "profitable") because of about 5 billion dollars a year in government subsidies.

Simply stated, the government uses your tax dollars to pay off farmers and cattle growers who produce inferior food that in fact poisons you. Think about that on April 15.

Government regulation is largely responsible for the problem of corn-fed, junk-food beef, but we the people are the solution to bring back the healthy meat our ancestors ate and thrived on. We need to start a grass-roots revolution by demanding grass fed beef, and paying the extra few bucks for it.

It's still a bit of a chore to find good grass-fed beef at the local supermarket. Even Whole Foods rarely carries it, although Trader Joe's sometimes does. The best way to get it locally and reliably is at a farmer's market. Here are two great sites to find one near you: Eat Wild, and the USDA's Farmers Market Search. You can also order beef by mail at Tropical Traditions.

Most of these recipes are not super-quick, but they are super-efficient. You only have to cook once to produce three to five delicious, healthy meals. All can be scaled up to make even more meals, or larger portions for larger guys. Always use organic ingredients whenever possible, as they're better for taste, nutrition, and the environment.

My girlfriend Tillie came up with a great turkey chili recipe, which is even better with grass-fed beef in terms of nutrition and taste. This is an easy, relatively fast recipe that will yield multiple servings of chili that are packed with omega-3s, CLA, protein, fiber, green veggies, and taste.

1,460 kcal for batch, 167 kcal for toppings per batch: divide it up according to your goals and needs. For example, 3 servings = 650 kcal per serving.

Potato pancakes are delicious, but like all fried starch, they're almost certainly a one-way ticket on the Man Tit Express. I missed them terribly, though, so my mother (bless her heart) came up with a low-carb version made out of zucchini. They're green, but they don't taste green. They just taste good, and they're even better with a dollop of sour cream and applesauce on top. My favorite way to eat them is on the side of a nice spice-rubbed, grass-fed steak. Mazel tov! Not that sour cream and steak on the same plate is exactly Kosher, but we'll give you a pass.

2,365 kcal per batch of steak and zucchini latkes: divide it up according to your goals and needs. For example, 4 servings = 591 kcal per serving (including 1/4 cup apple sauce and 1 tablespoon sour cream on top of green cakes).

When I was a vegetarian, complete with boobies, a jelly-roll, and no muscles, Eggplant Parmesan was my favorite thing to get at a restaurant. When I decided to ditch the tits and pack on some mass I needed a way to enjoy my old favorite dish without compromising my physique. So, I called my mom and she came up with this low-carb Eggplant Parmesan recipe. She also said maybe she should be writing my articles. Oy vey!

Anyway, this great new recipe's got the eggplant, cheese, and sauce that I love. It's also got lots of high-quality animal protein and healthy fat to make me big and strong, without any breading and pasta to make me squishy and sleepy. Thanks, Mom.

2,754 kcal per batch: divide it up according to your goals and needs. For example, 4 servings = 688 kcal per serving.

Almost all stew recipes call for coating the meat in copious amounts of white flour, and then to fry it in great gobs of fat. That pretty much unravels the nutritional benefits of the meat and veggies. And frying white flour creates acrylamide that is most definitely carcinogenic.

On top of that, beef stews generally contain a whole bunch of potatoes. While that might be fine to eat if you just lifted weights, it's not such a good idea if you've got body fat to drop. But stew doesn't really taste right without the potatoes. Turnips to the rescue! They're white, they taste like potatoes in a stew, and almost all the carbs are from fiber.

One thing, though: stews take a long time to cook. You can get it into the oven in about 20 minutes, but it will need to cook for 2 to 2 1/2 hours. The good news is that you don't need to watch it, stir it or anything else. You can drive to the gym, lift, and drive home, take a nice long nap, do work, or anything else while it cooks. Just be home in time to take it out of the oven.

2,524 kcal per batch: divide it up according to your goals and needs. For example, 5 servings = 505 kcal per serving.

2,491 kcal per batch: divide it up according to your goals and needs. For example, 4 servings = 649 kcal per serving including 1 cup peas (26 kcal per servings), and 3 tablespoons peanut sauce. There is generally always left over peanut sauce and the alcohol cooks away, so the real calorie count is actually lower.

But enough damn recipes! Get out there and eat some beef!

So you want to get shredded, do ya? Like, ridiculously shredded? You know, 3% body fat shredded? Well, if so, you're in the wrong place, bubba.
Feeding the Ideal Body, Nutrition & Supplements
John Berardi, PhD August 28 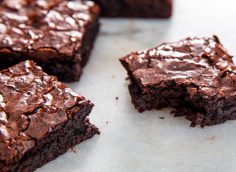